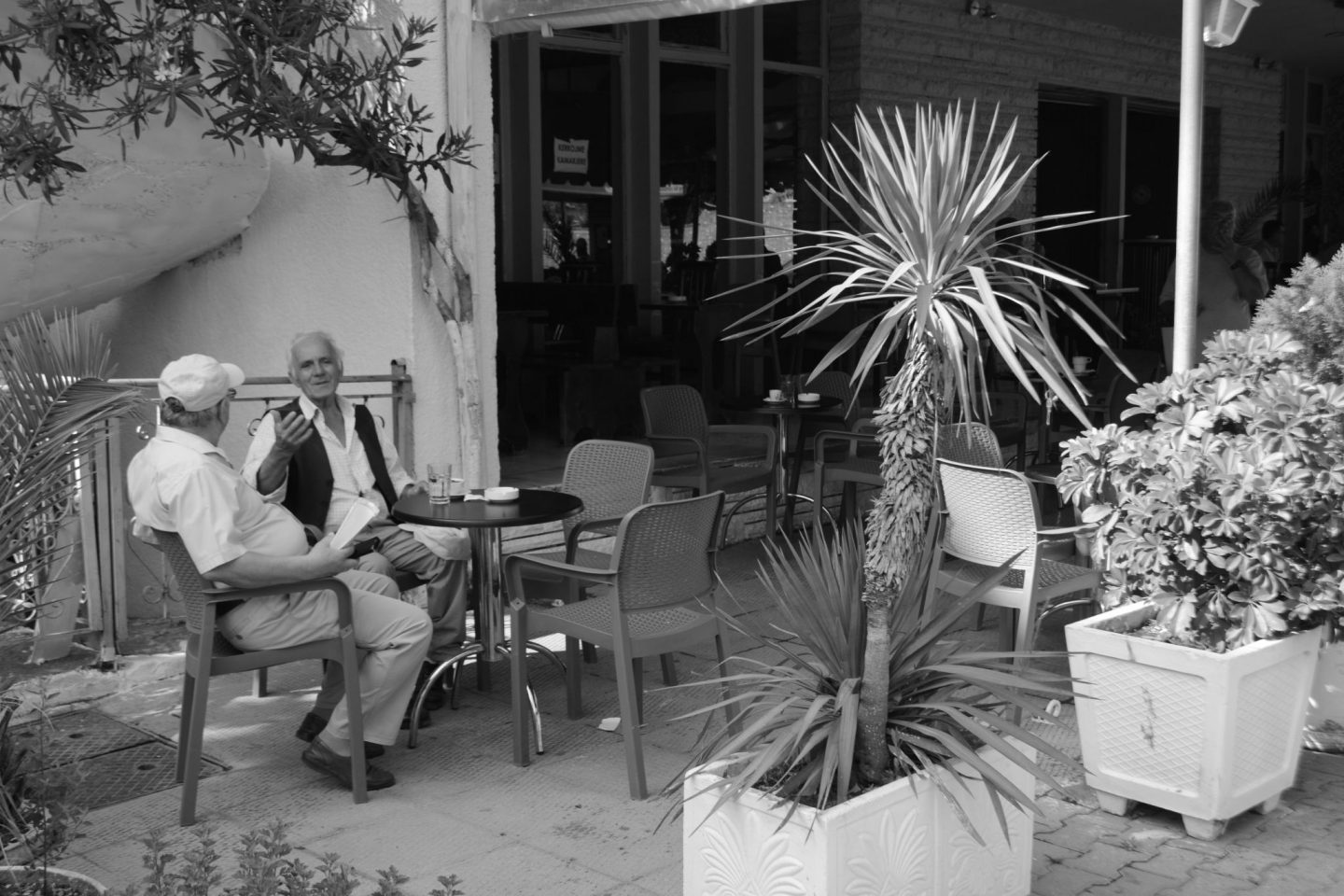 To be quite honest, I never expected myself to end up paying a visit to Albania. In my mind, it was always one of those European countries that I’d never end up sticking a pin in on my travel map.

But there we were. In Saranda.

The night before the ship had docked, the cruise director made an announcement saying not to expect Saranda to be like the ports of call we had already docked at thus far. After seeing the grand old towns of Split and Dubrovnik and the stunning views, it was important that we didn’t expect to see the exact same things in Saranda. It wasn’t a popular port of call for many cruise lines, which is what made it unique, but also not as developed by tourism as other regions may be. 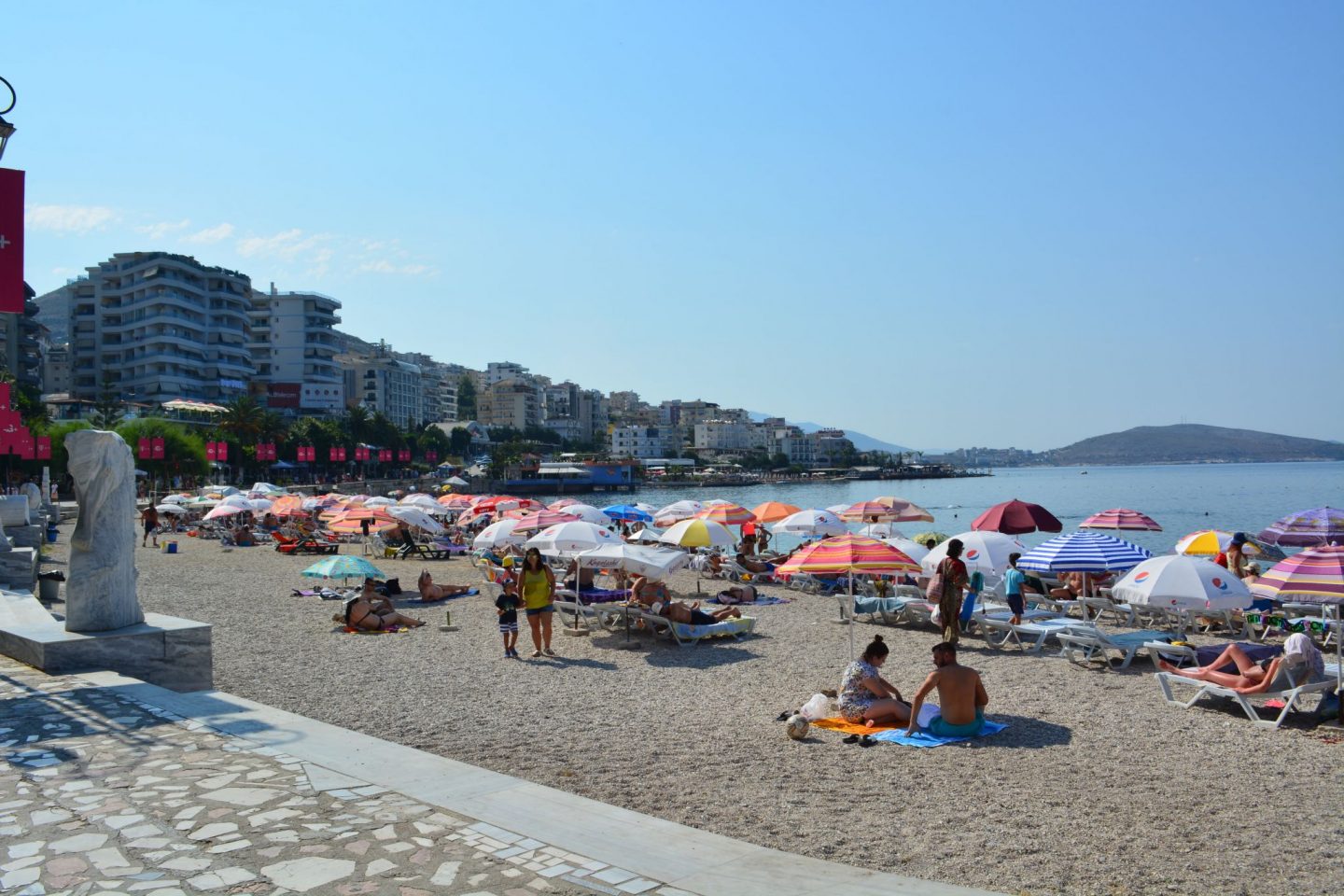 We had chosen a tour that would take us all the way to the Blue Eye National Park, one of the area’s top attractions. Because it was a little bit of a drive away, we wanted to go with one of the ship’s tours. What makes the park so special is that it boasts 18 very deep and cold natural freshwater springs or “wells”. The famous ‘Blue Eye’ is Europe’s deepest freshwater spring. 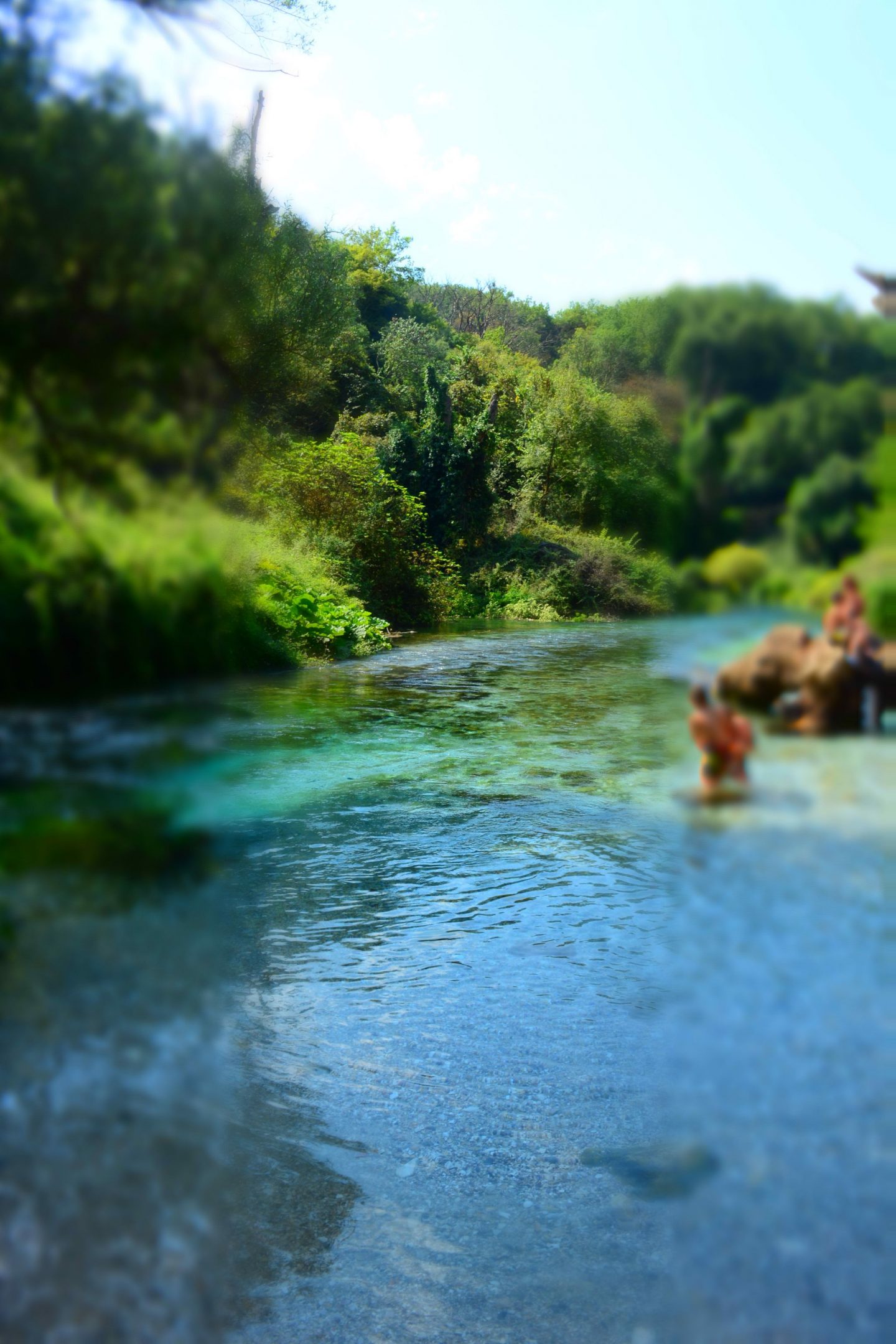 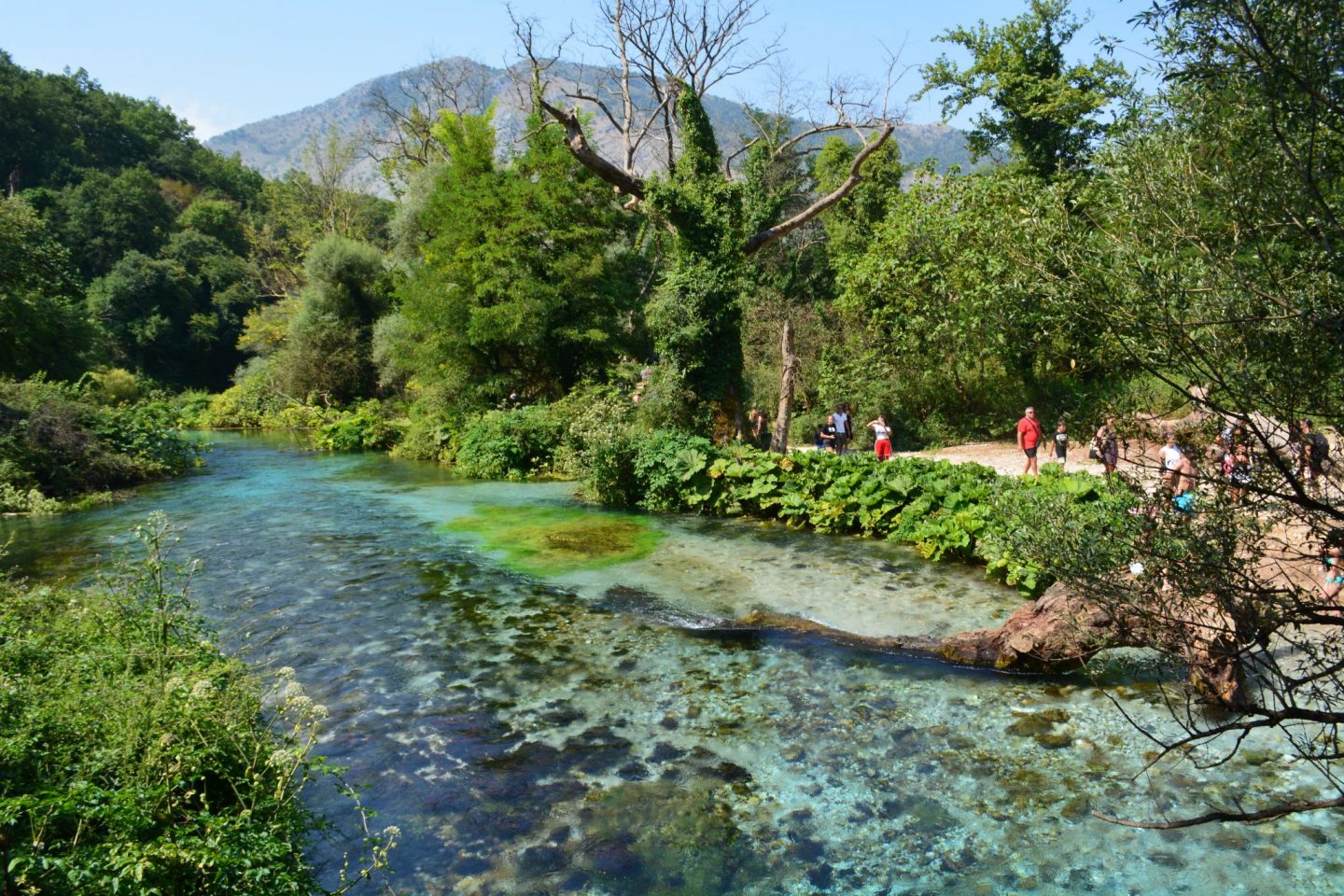 Just like every other day so far, we headed off the ship bright and early to meet our tour. We started off the day by just walking around the city and by the waterfront with our tour guide. Immediately, I noticed such a big difference between Albania and the countries we had visited so far. Albania was noticeably a country that had a shaky economy and a shaky government structure. It was a poverty-stricken country, and the buildings were run down and dilapidated. Beyond that, it appeared as if so many families were out on the streets. As the tour guide was taking us through the streets, there were constantly children, young and older, who would come up to us, with their hands outstretched, begging for money. Even after you shook your head or refused to open your purse, they’d still stand there and stare you dead in the eye, hand still outstretched. You’d say ‘no’ and try to look away, but they’d keep hovering. The children would see us coming down the street, and would rushing to us, hands already open. I remember making a comment that I wouldn’t be surprised if that was the first gesture they learned growing up.

Our first stop of the day was the Synagogue complex, which dates back to the 5th century AD. Only a few ruins remain, so you really have to use your imagination to picture what could have stood there more than 1500 years ago. The Synagogue complex is the only remain that can be found of the very wealthy Jewish community that lived in Saranda during this time period. They represent what was once a community center and old school used for bible studies. During the 6th century, the buildings were converted into a basilica.

We boarded the bus and headed to go see the very renowned Blue Eye. When we got there, I wouldn’t say we were let down, but it definitely wasn’t as grand as I had pictured it to be. Yes, it was beautiful, but standing up on a bridge and looking down, you could really only see extremely clear water, a dark spot that might have inspired the term ‘blue eye’, and many ripples in the water. 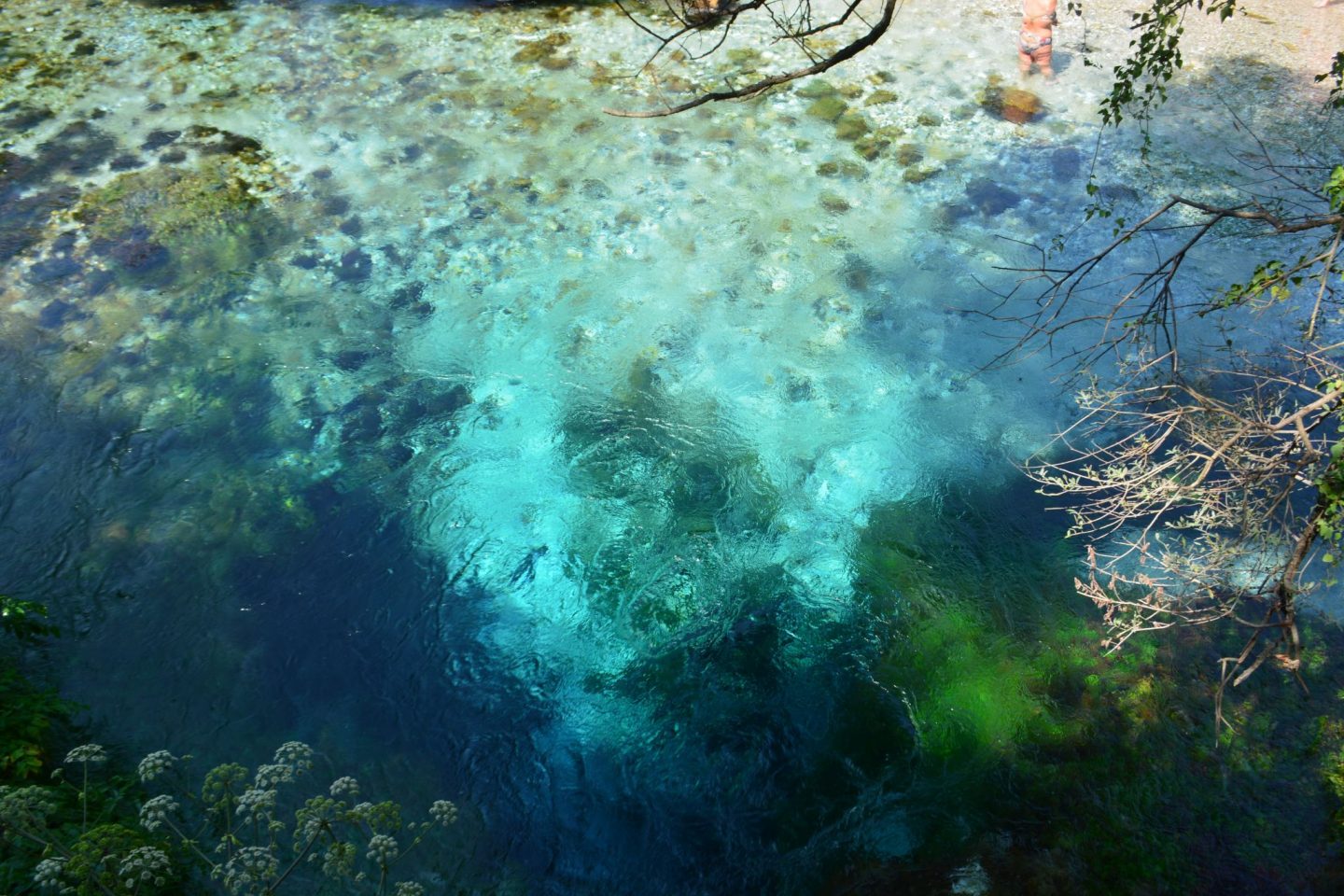 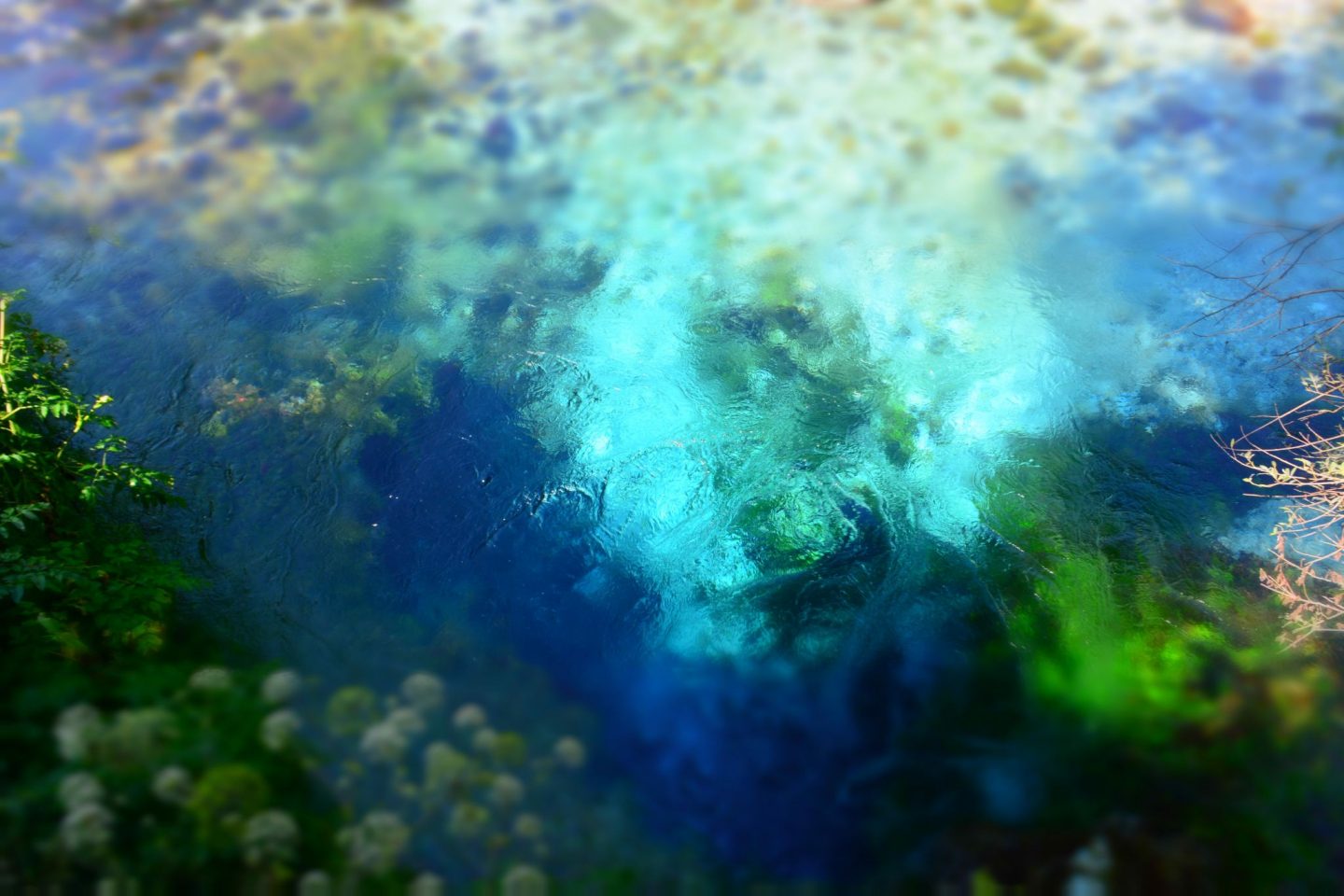 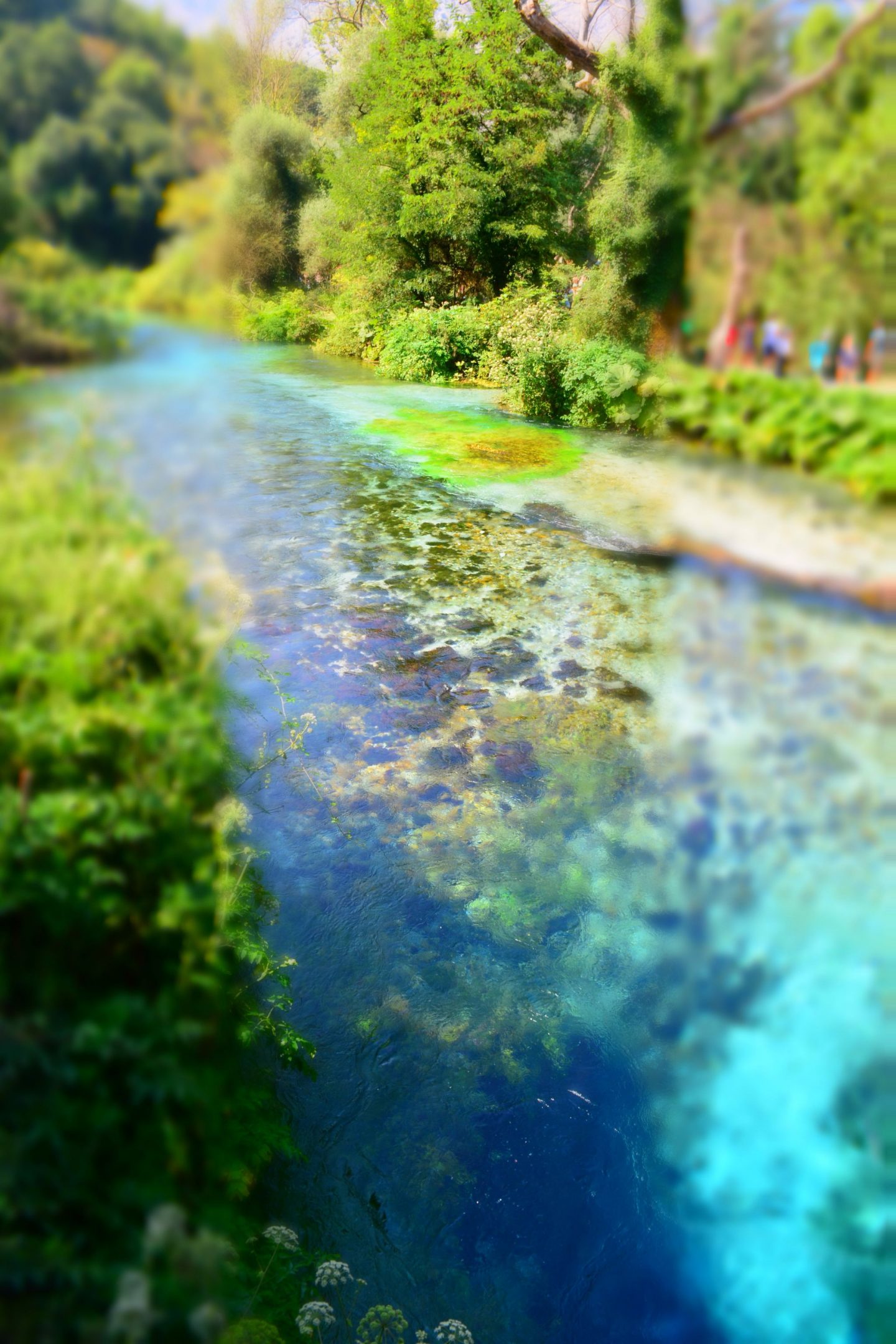 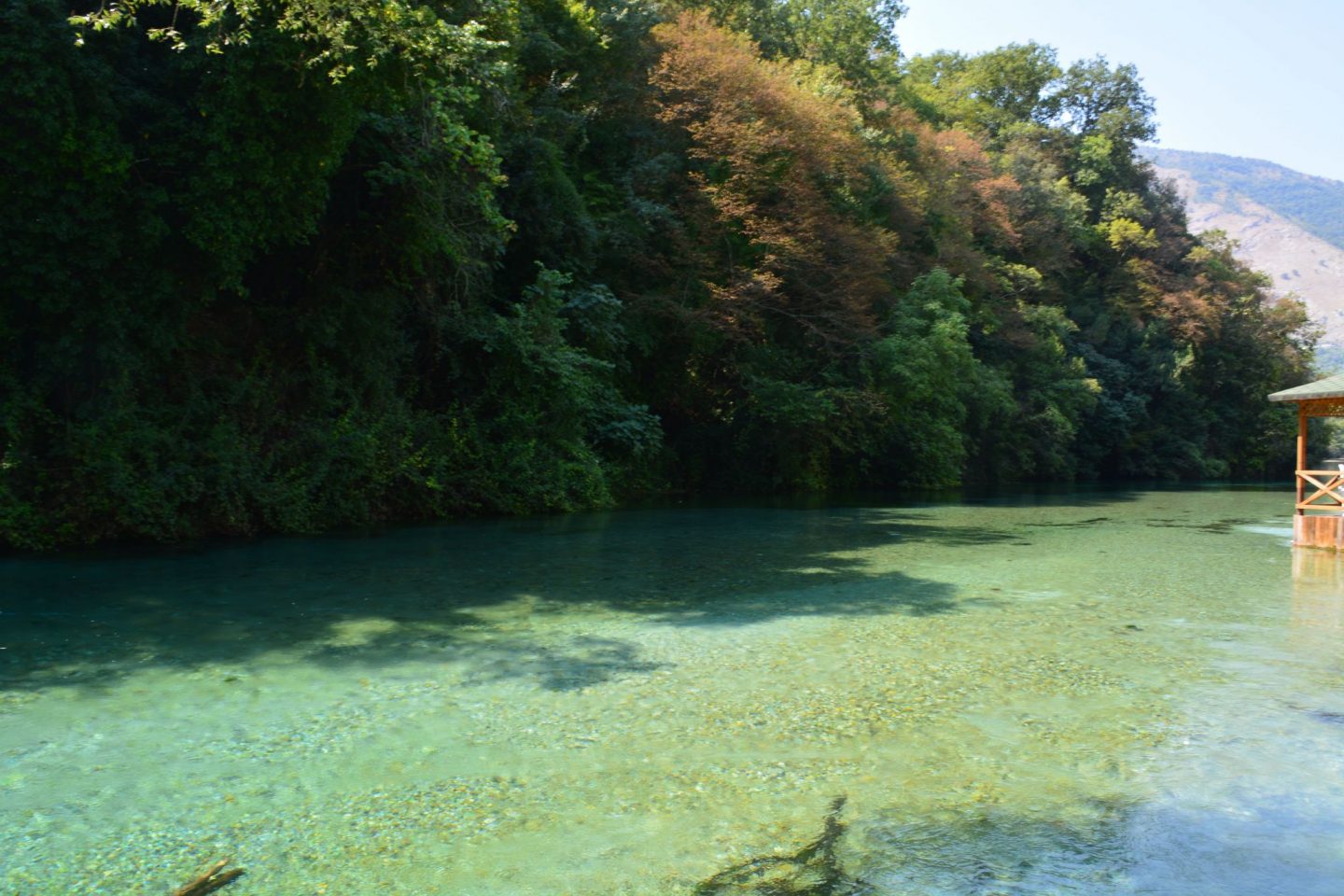 You could really only stare at its beauty for so long, before concluding your trip. We weren’t able to see the rest of the national park, which might have offered other sights, so after our glance at the Blue Eye, we boarded the bus once again.

Our last stop of the day was the Castle of Lekuresi, which is located 1800 feet above the city of Saranda and was built at the beginning of the 17th century. Now, this was grand. This was impressive. This is what makes you stop for a second and blink just to make sure the view was real. At the top, you get a breathtaking view of Lake Butrint and the mountains beyond. You can also see the Ionian and Adriatic Seas, and the coastline of Corfu just in the distance. It was miles and miles of blue. And infinite waves of happiness. 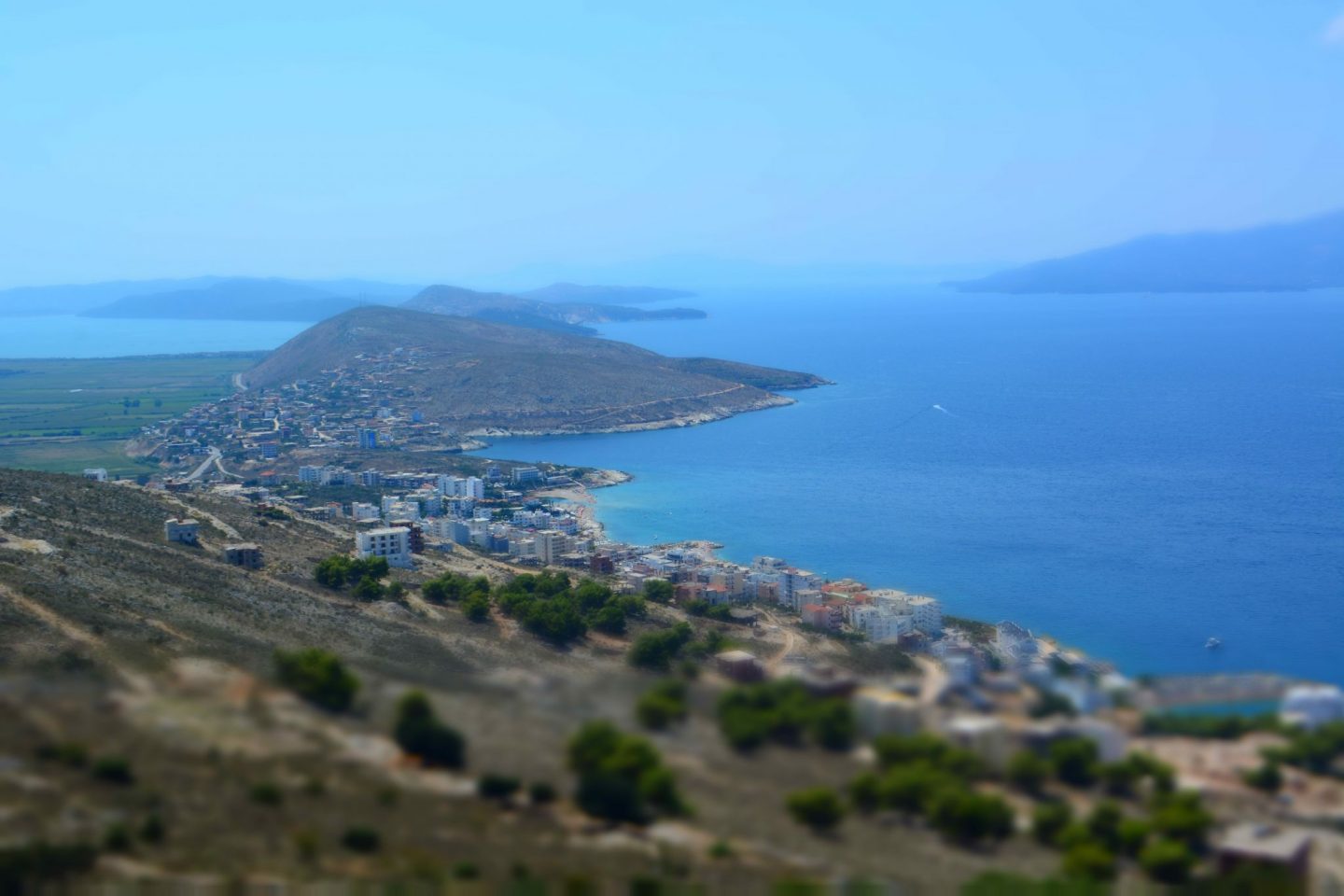 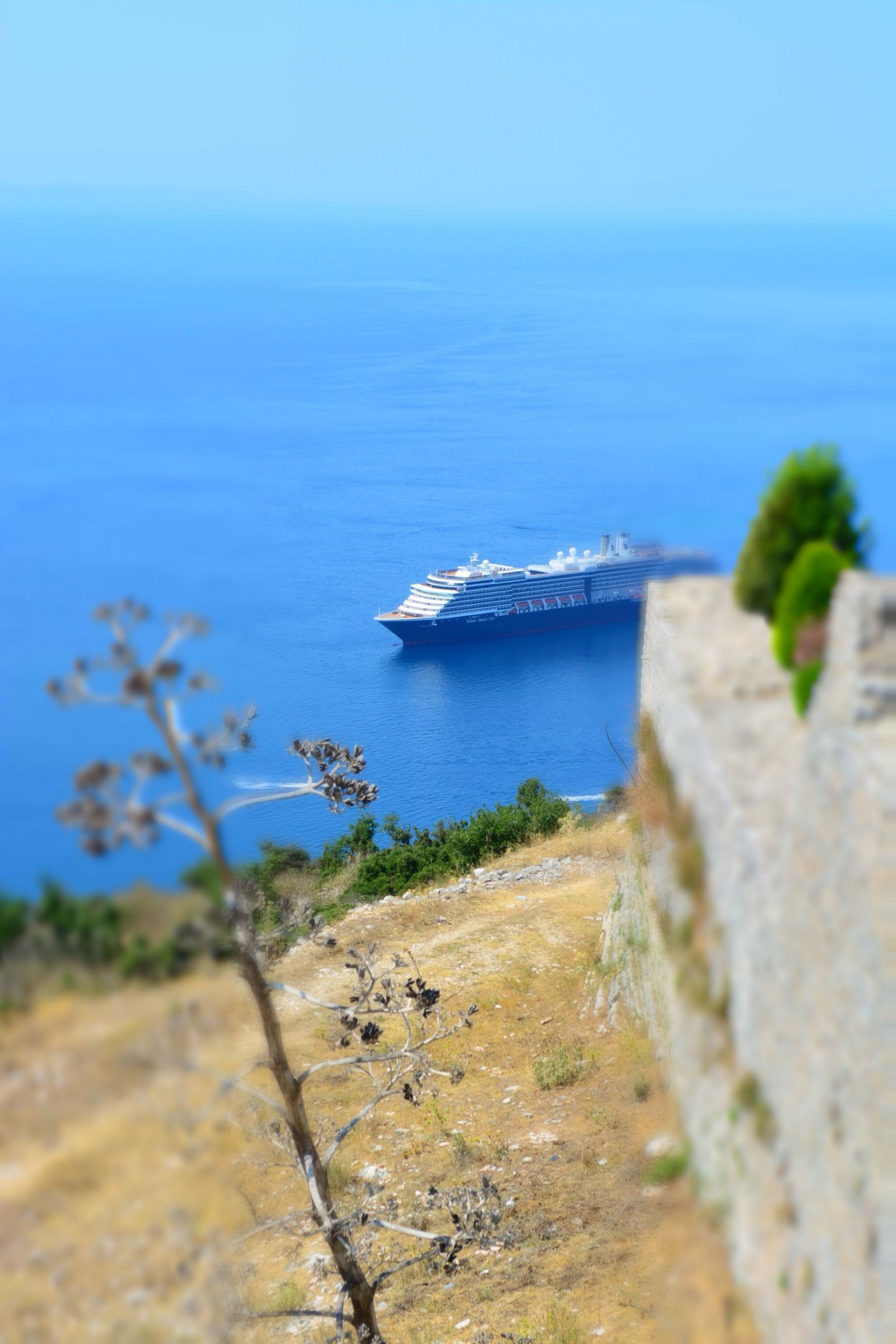 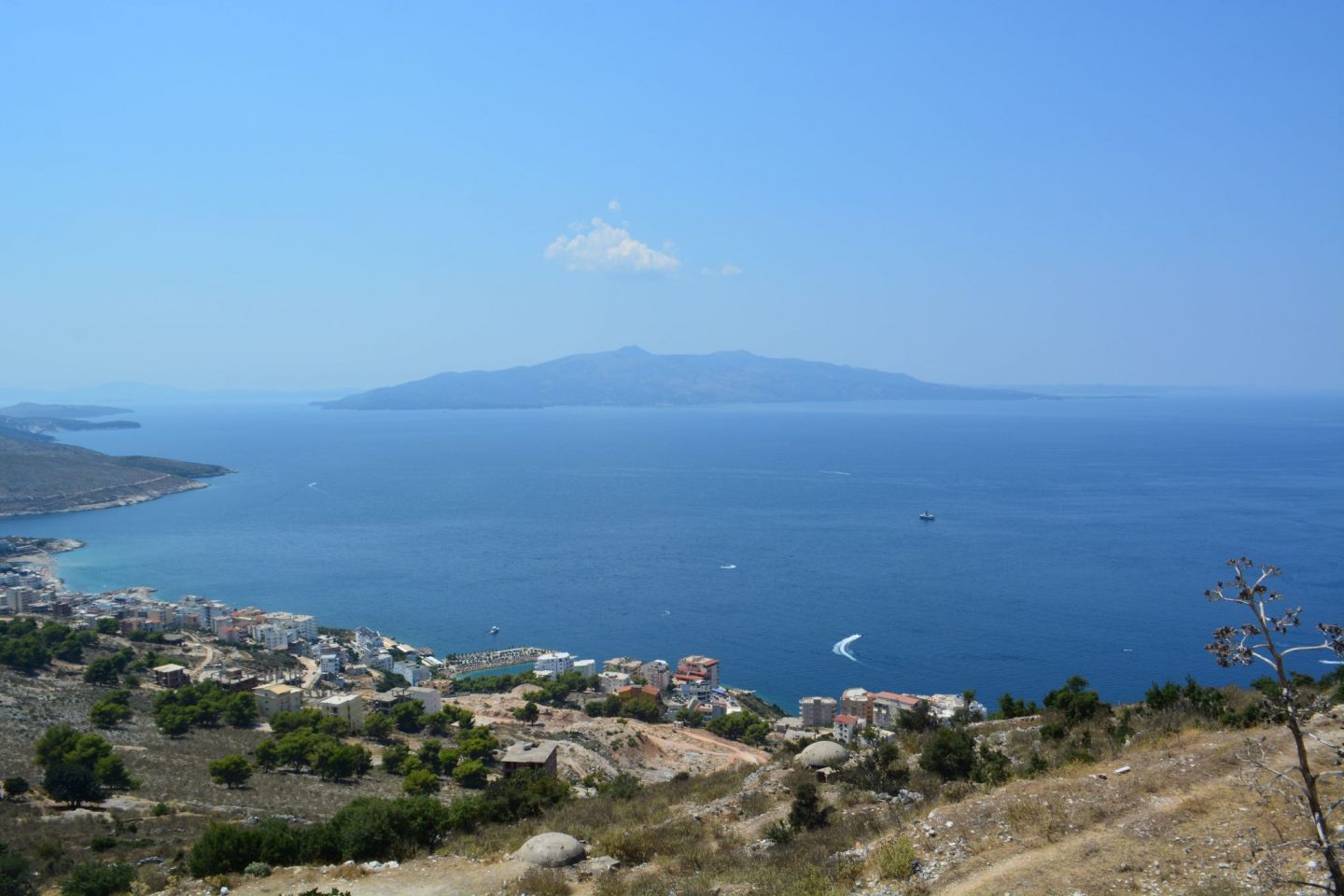 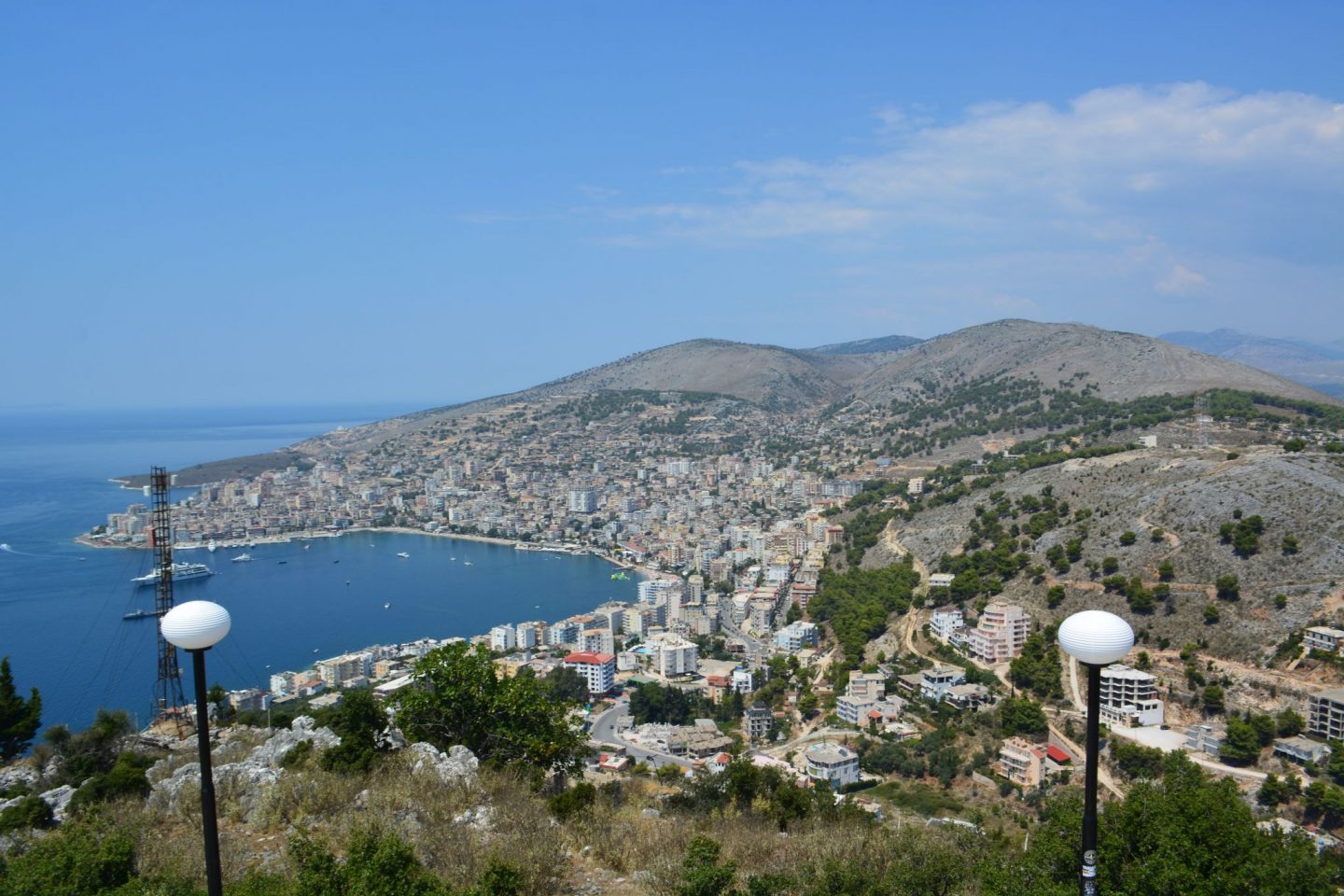 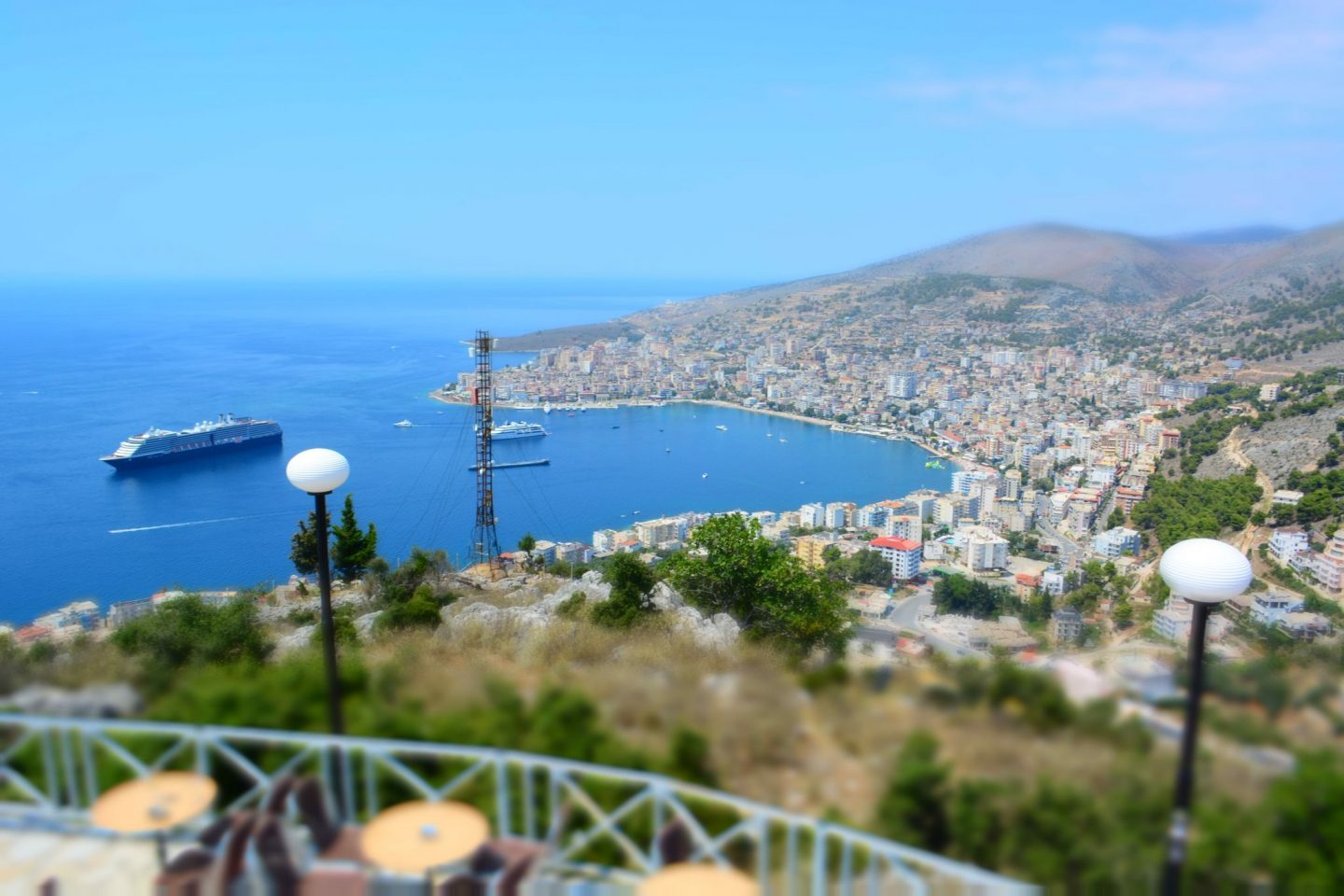 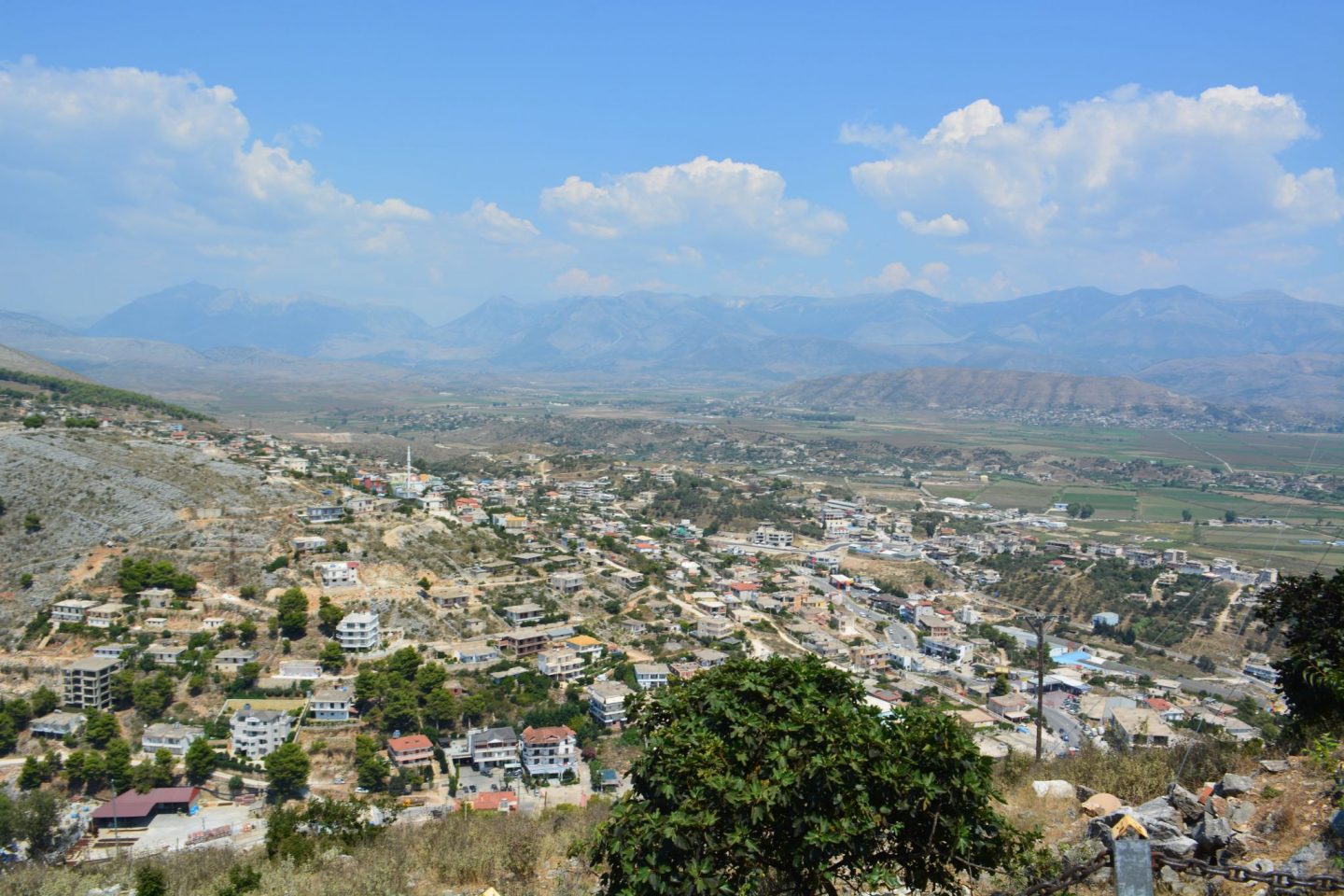 We snapped a few (dozen) pictures and then we all made our way back to the ship.

To sum it all up, it was eye-opening to see Albania, but I would not purposely make a stop in the country in the future. And I guess that is what I love about cruises. It allows you to see cities and countries that you might have otherwise overlooked. It gives you a taste so even if you don’t absolutely fall in love with the port, you’re only there for a few hours. Then you get transported somewhere else.

Stay tuned for the next blog post, where we will be transported to Greece: the blue and white country.