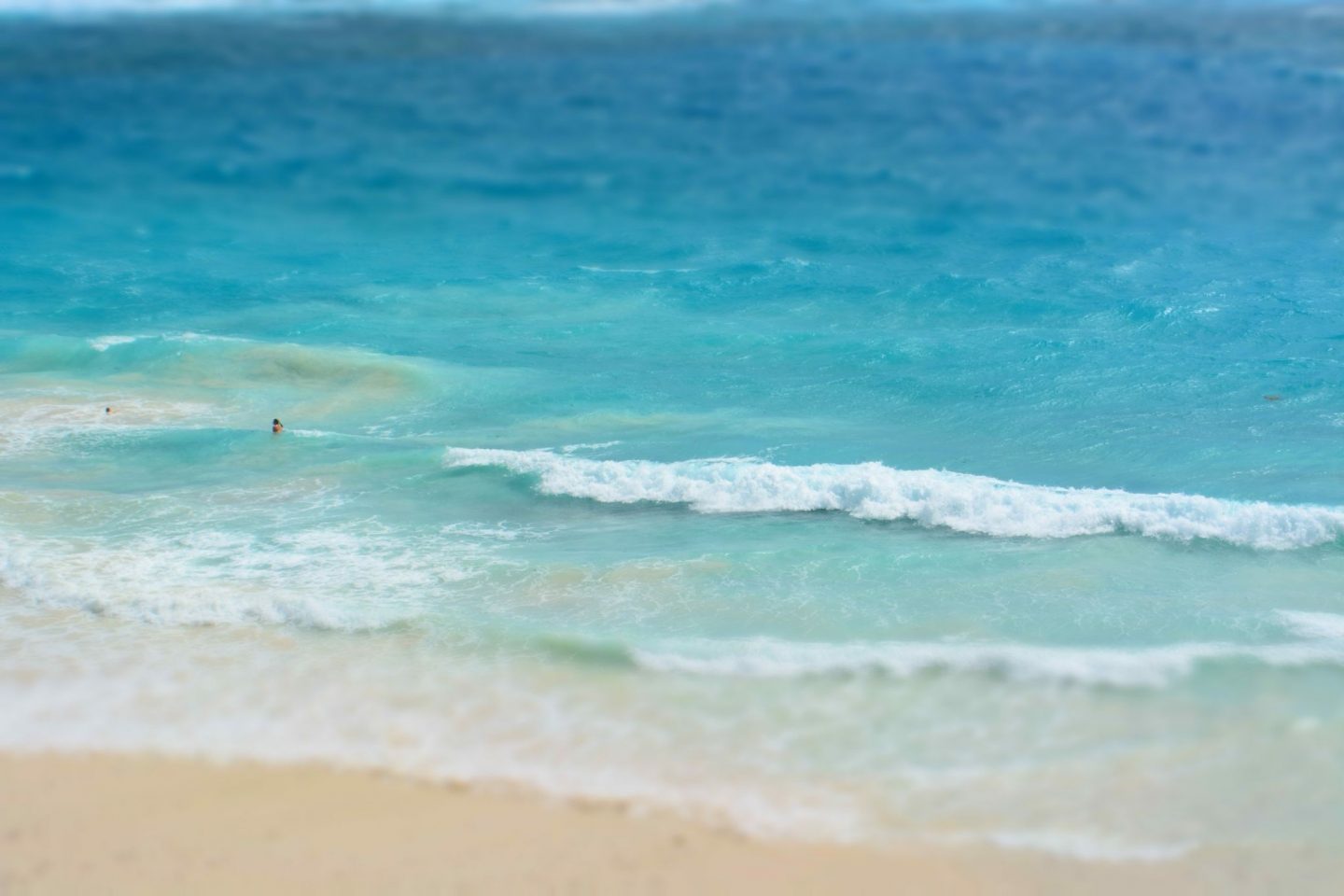 Barbados was really the land of sun if you were to ask me. The king of Caribbean vacation destinations. The sunniest of suns. It’s where you were to go if all you wanted was a drink and a tan. So with this in mind, we knew the beaches would be good, and after a bit of research, we realized there wasn’t too much to tour on land.

So for this one, we skipped the Princess tour and decided we were just going to spend a day at the beach by ourselves. That’s all we really wanted for this port. Before docking, we talked to the shore excursion officers for a bit and they did mention that there was a pink sand beach on the island – Crane Beach. The sand was pink because of the small grains of crushed red shells mixed in with the powdery white sand, which gave it a very, very faint pink tint. She also mentioned Carlisle Bay Beach as being the best beach in terms of “fun” – they had it all there: banana boating, beach clubs, climbing activities, jet skis, you name it. So we packed our bags, brought our towels and sunscreen, and got ready for a day at the beach. 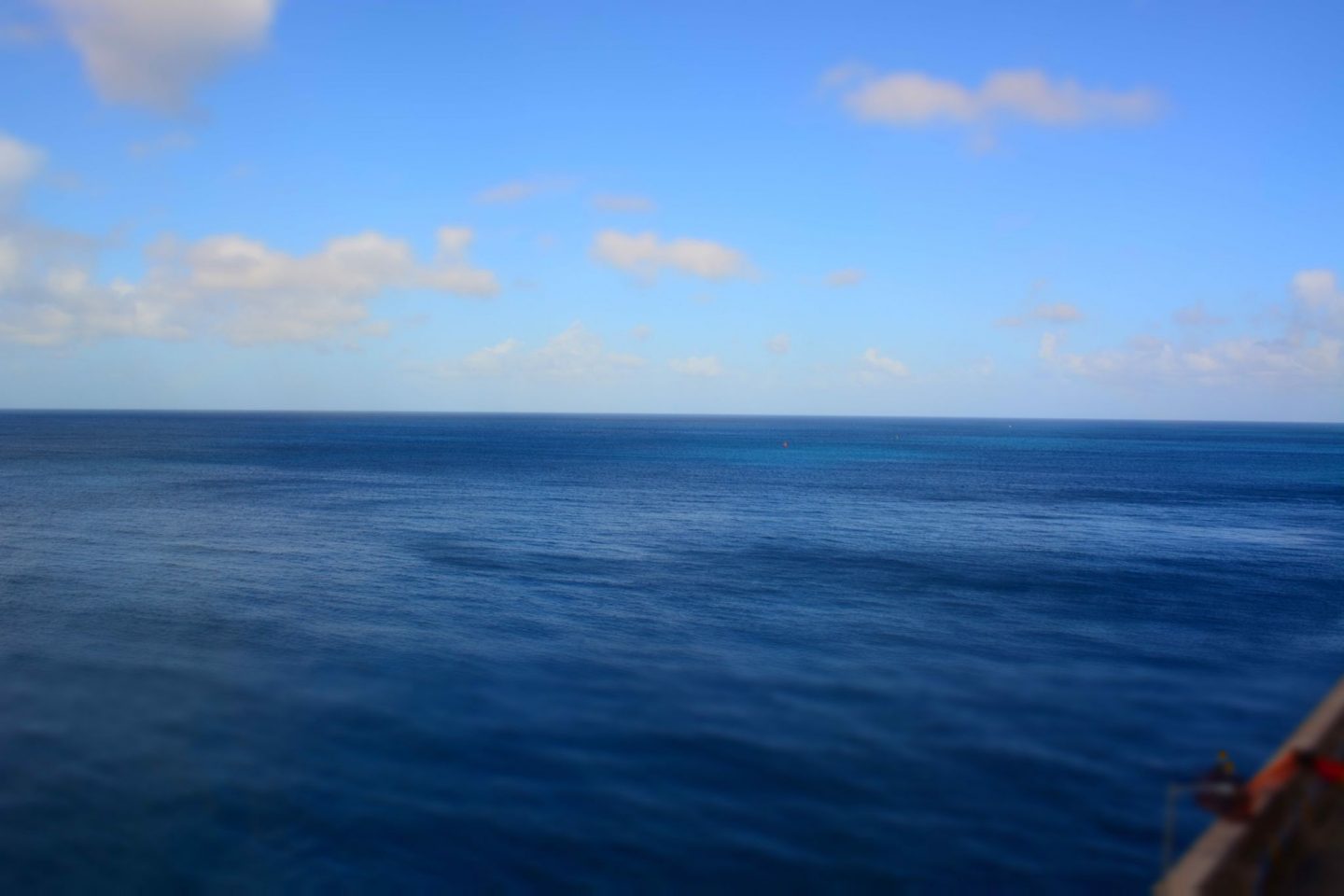 We thought the day was going to be entirely relaxing. Eyes closed, the sound of crashing waves which would serve as our music, and the warmth of the sun grazing our entire body. For the most part, the day was like that.

But definitely not at the beginning.

Getting off the boat, we were thrown into the most chaotic environment trying to find a taxi. It was crazy. We had taxi drivers and workers come running at us, yelling at us, asking us whether or not we needed a taxi and where we were headed. We told them we wanted to go to Crane Beach to take a couple pictures and then head straight to Carlisle Bay for the day. We just needed a driver to take us to the first stop, wait a bit as we took pictures, and then drag us right back.

More shouting between the drivers. Cars honking. A man told us to come with him and after we agreed on a price, he told us to get into a van that already had a couple and a family of 4.

We sat in the van and watched the craziness take place outside. The door of the car would periodically open, we’d see the faces of new people, and the driver (or one of the company workers, I still don’t know) would tell us to make room for the new additions. Then, maybe five minutes later, the door would open again, the driver would tell a family or a couple to get out and he would bring them to another van. Their main focus was just finding the best people to pool together based on where they wanted to go, and they wanted to get as many bodies into a car as possible, even if it meant I was sitting on somebody’s lap (which thankfully didn’t happen). It felt like we were cattle being traded, what with the non-stop yelling, the pushing and shoving, the fighting over who was taking who.

If only I had gotten pictures of all this.

Finally, we had finalized the taxi group and the driver got in and started the drive to Crane Beach, which was on the other side of the island and was about a 30 to 40-minute drive from the pier. Along the way, he pointed out a couple sights out to us too, like Rihanna’s old house or the rum factory.

We got to Crane Beach, parked at one of the resorts there, and wandered over to snap some pictures. 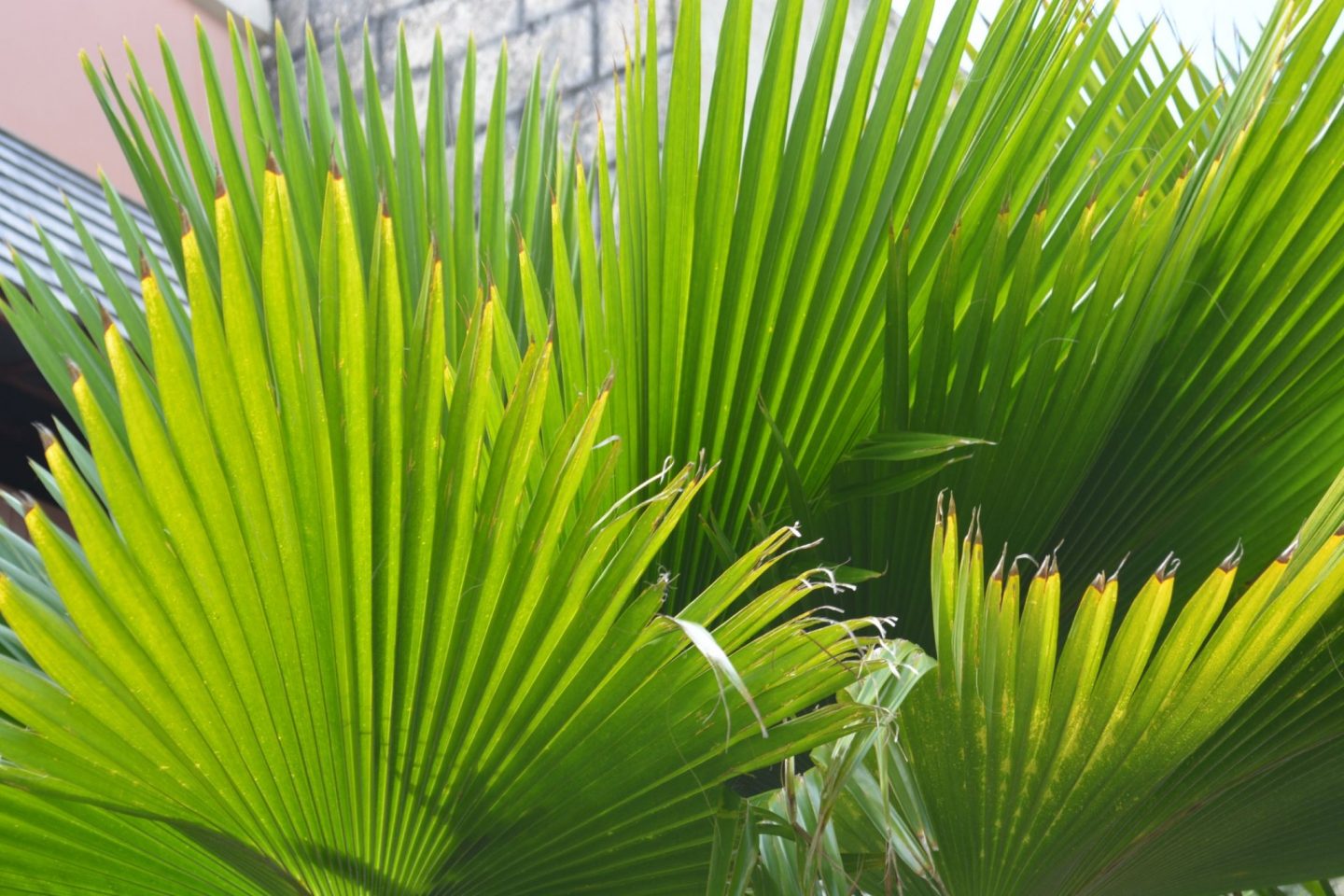 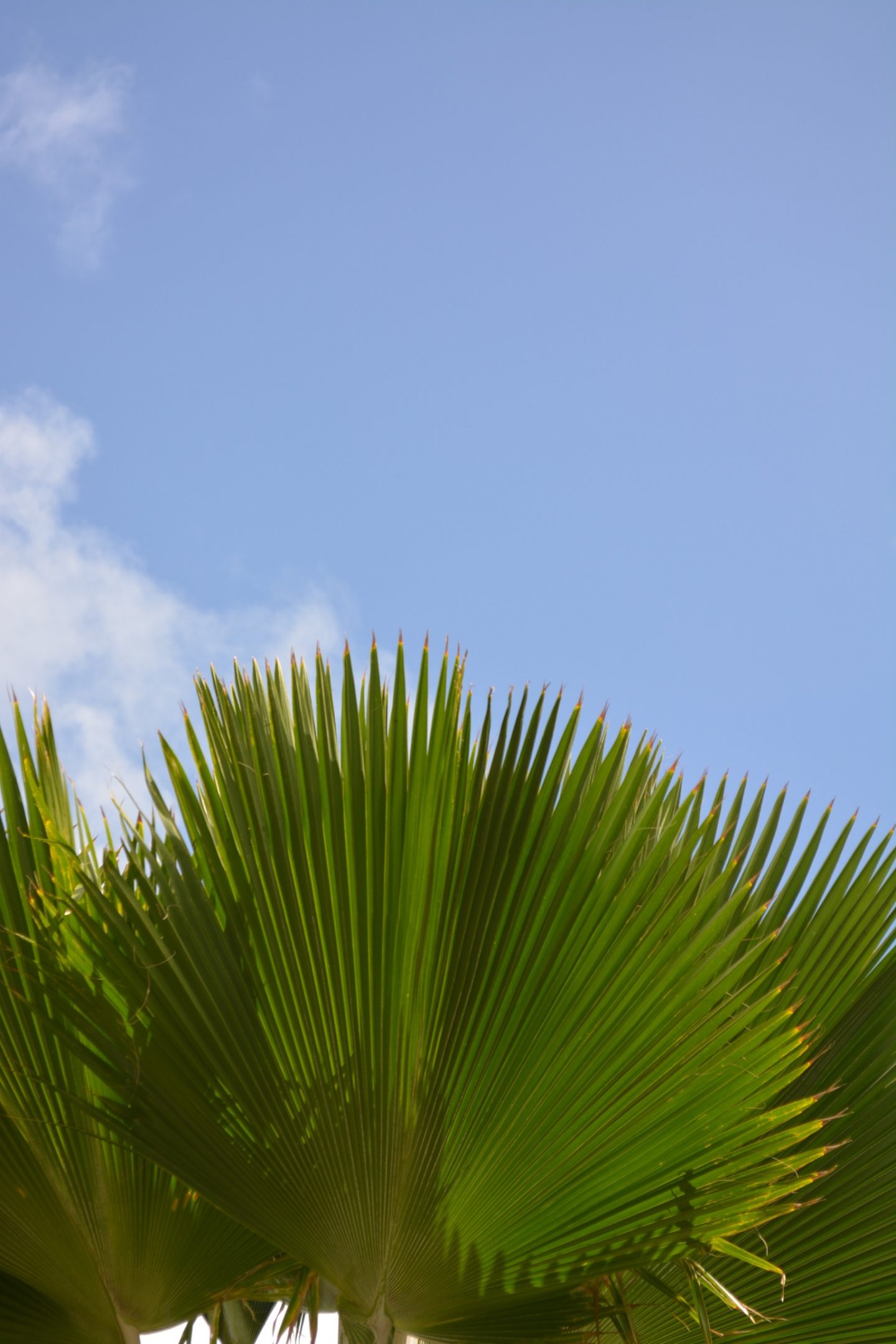 It was not what I thought it would look like at all. We saw it from above from far away and the sand did not have a pink tint to it at all. It looked like just another regular beach with white sand. I was shocked, probably because in my head, I had been expecting a very noticeable rosy beach. Even the black sand beach we had seen in St. Kitts was very obviously black, so I thought it would’ve been similar in this case.

In spite of the mild disappointment, the view was still amazing. The waters were a crystal blue and the roaring of the waves was music to my ears. The breeze felt so nice and it was hard to let even an ounce of a bad mood creep in. 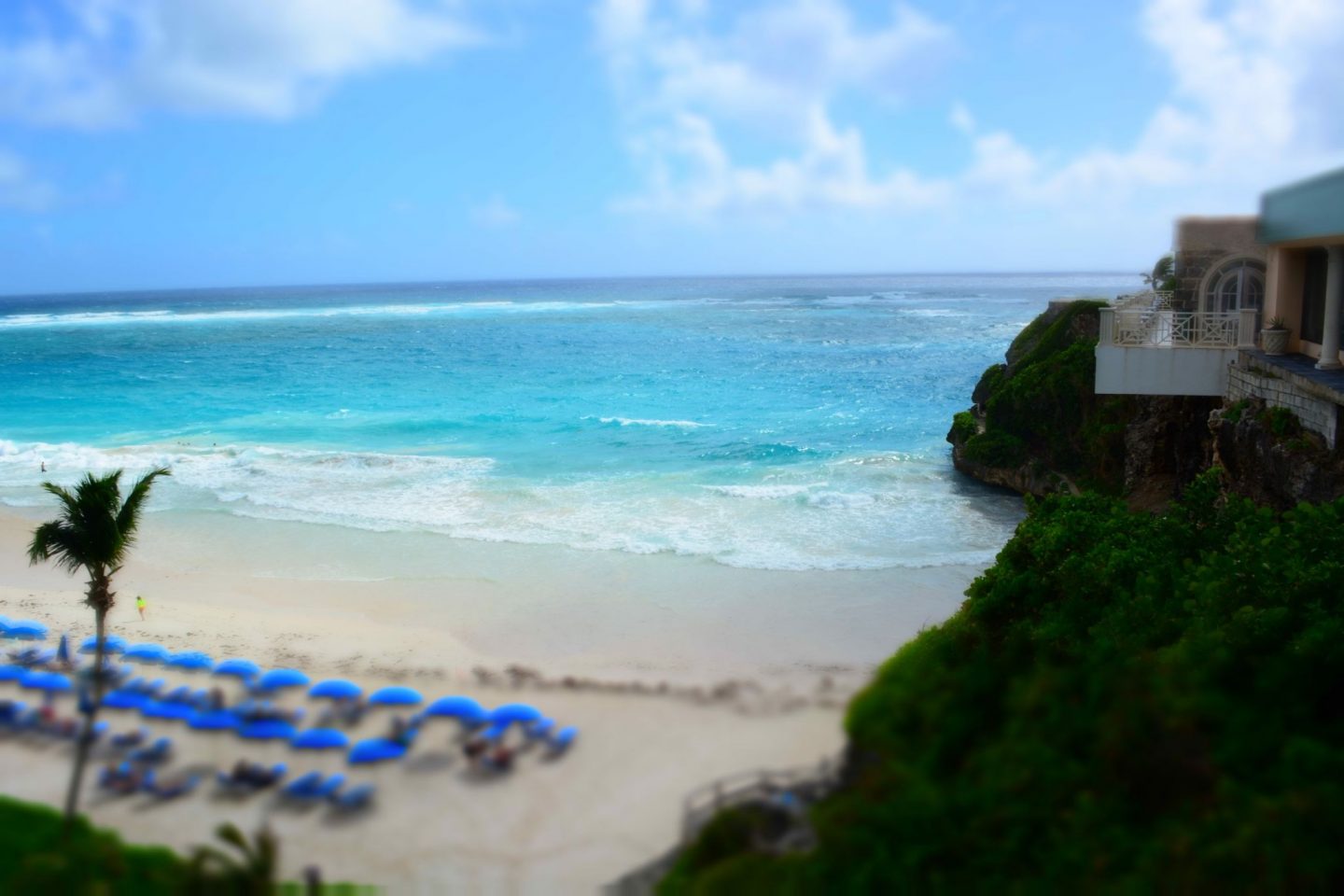 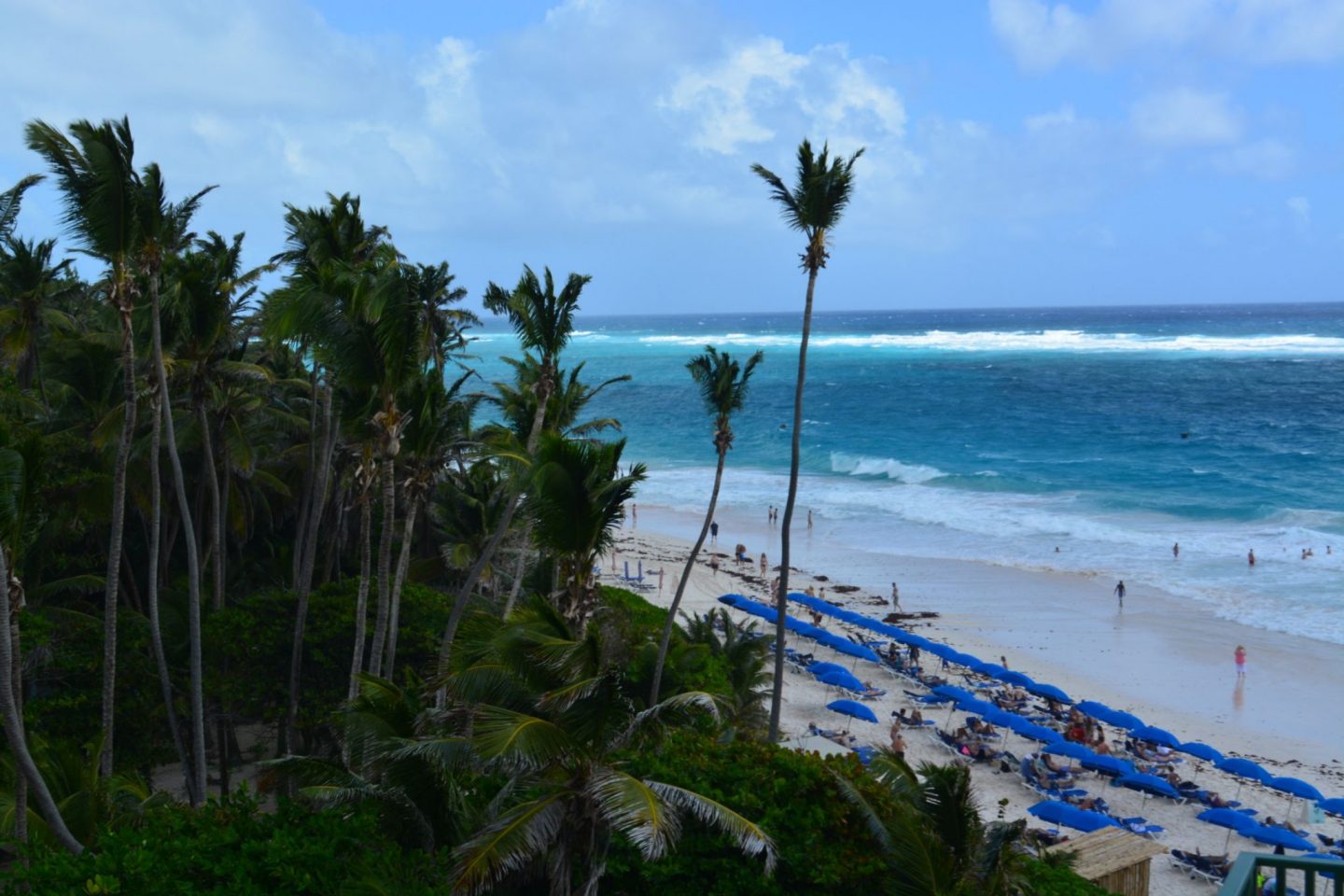 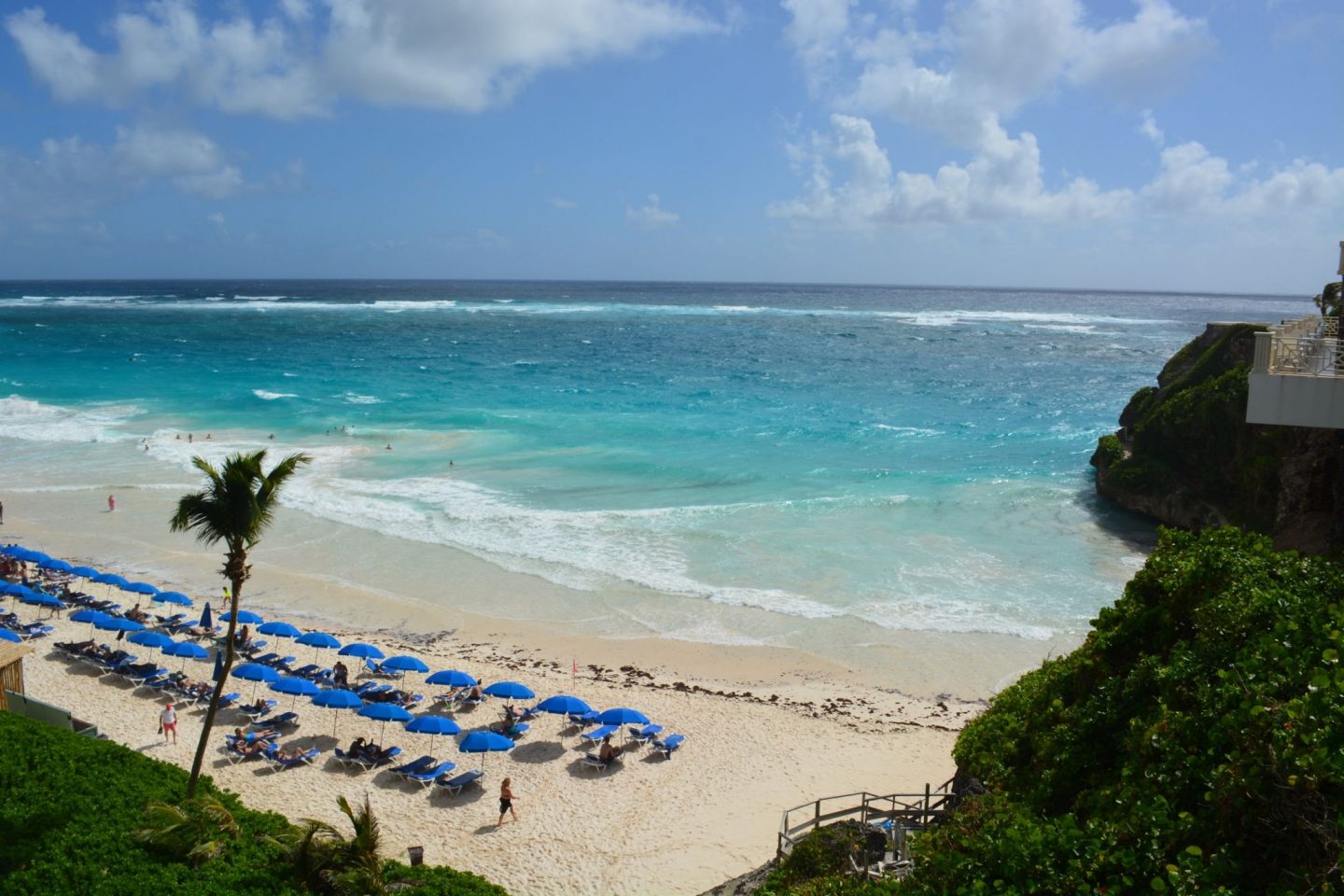 I had never seen better waves and better water. 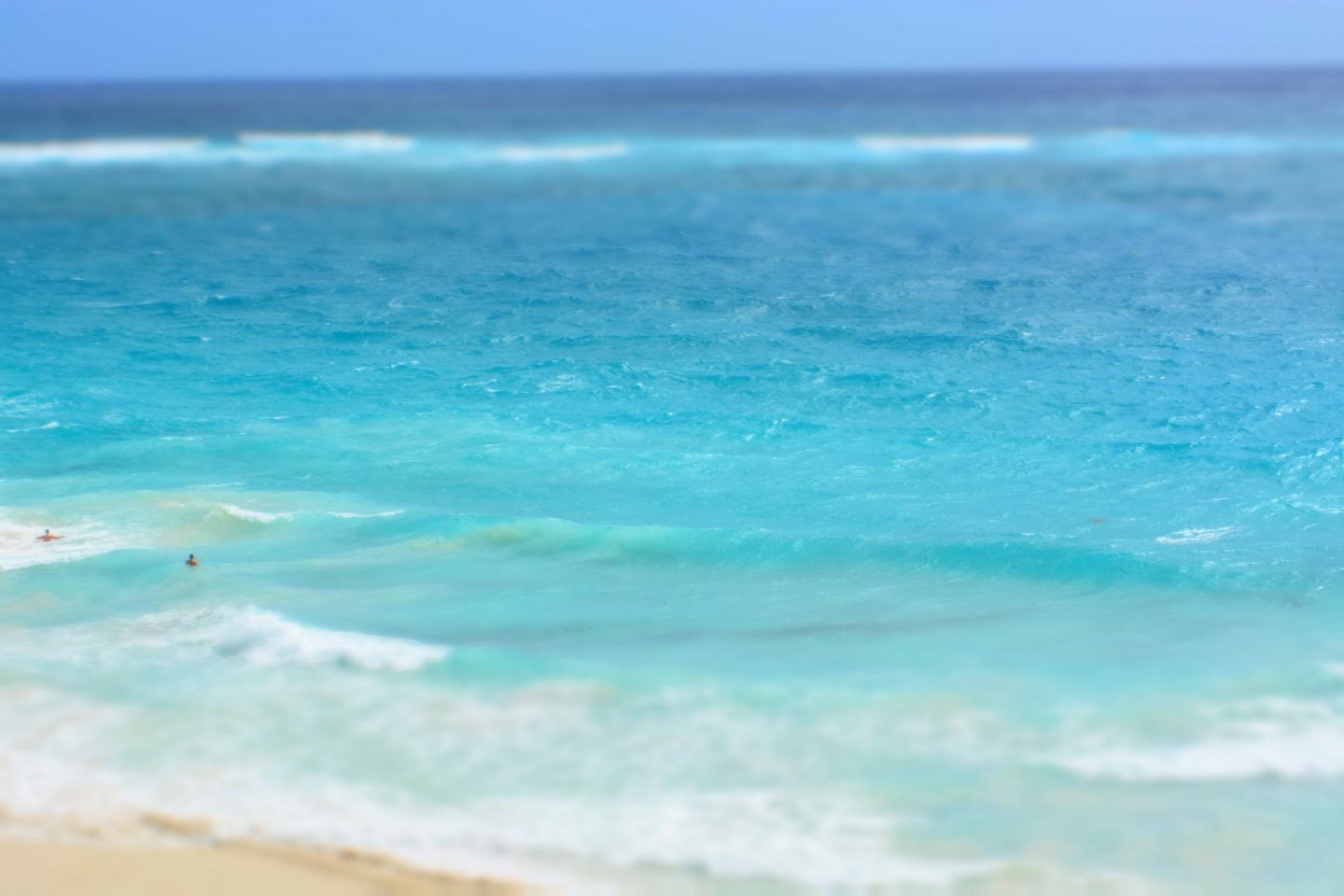 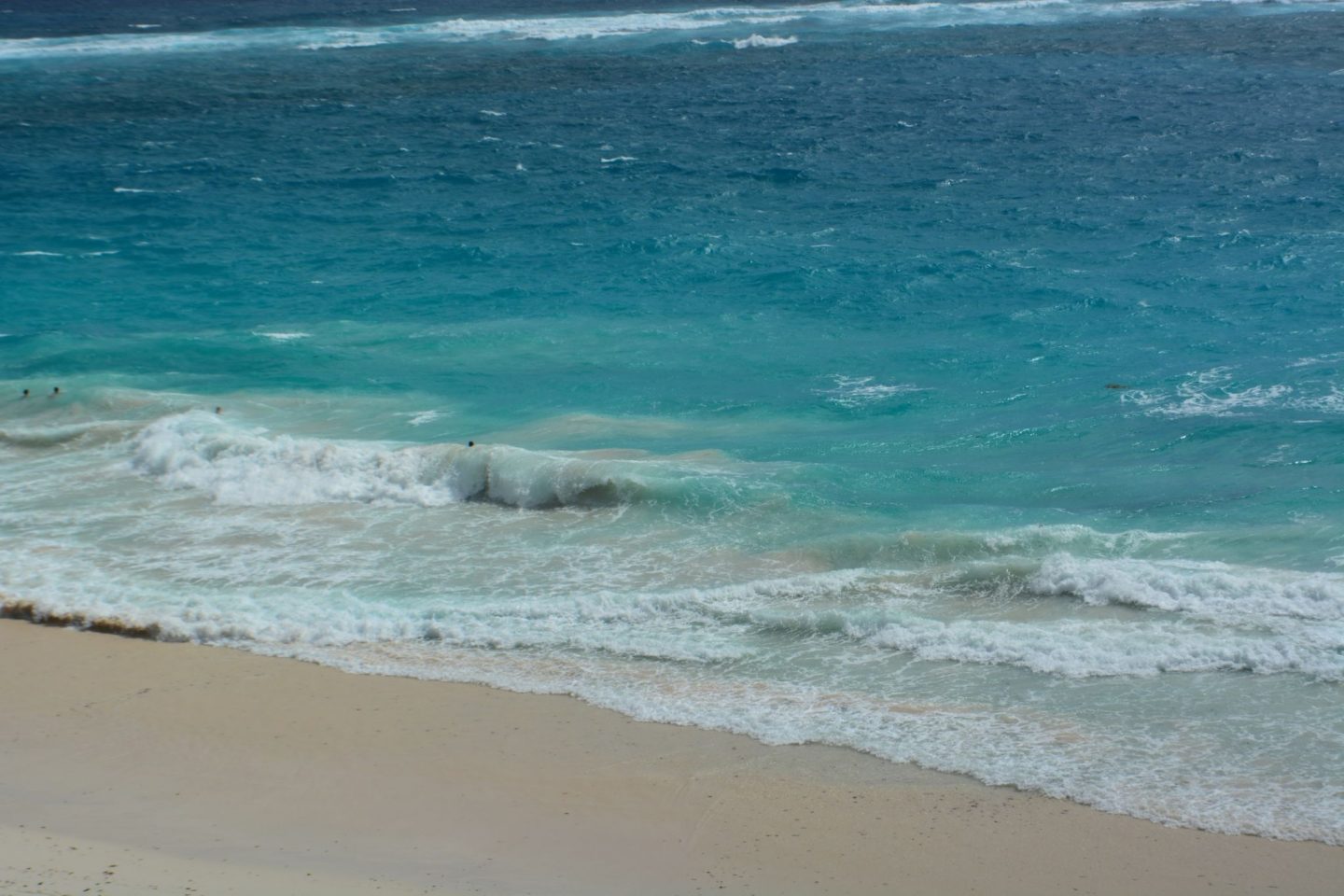 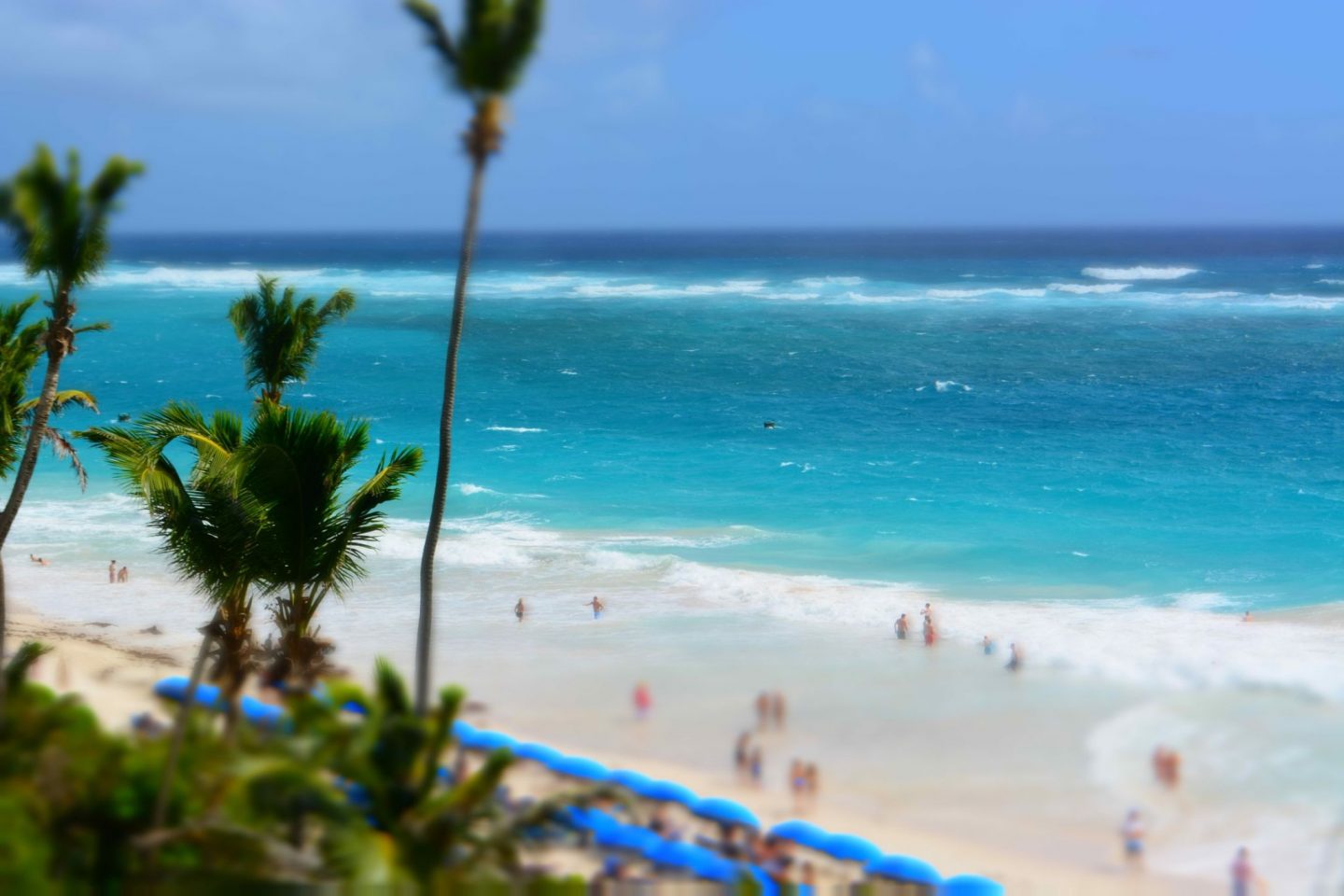 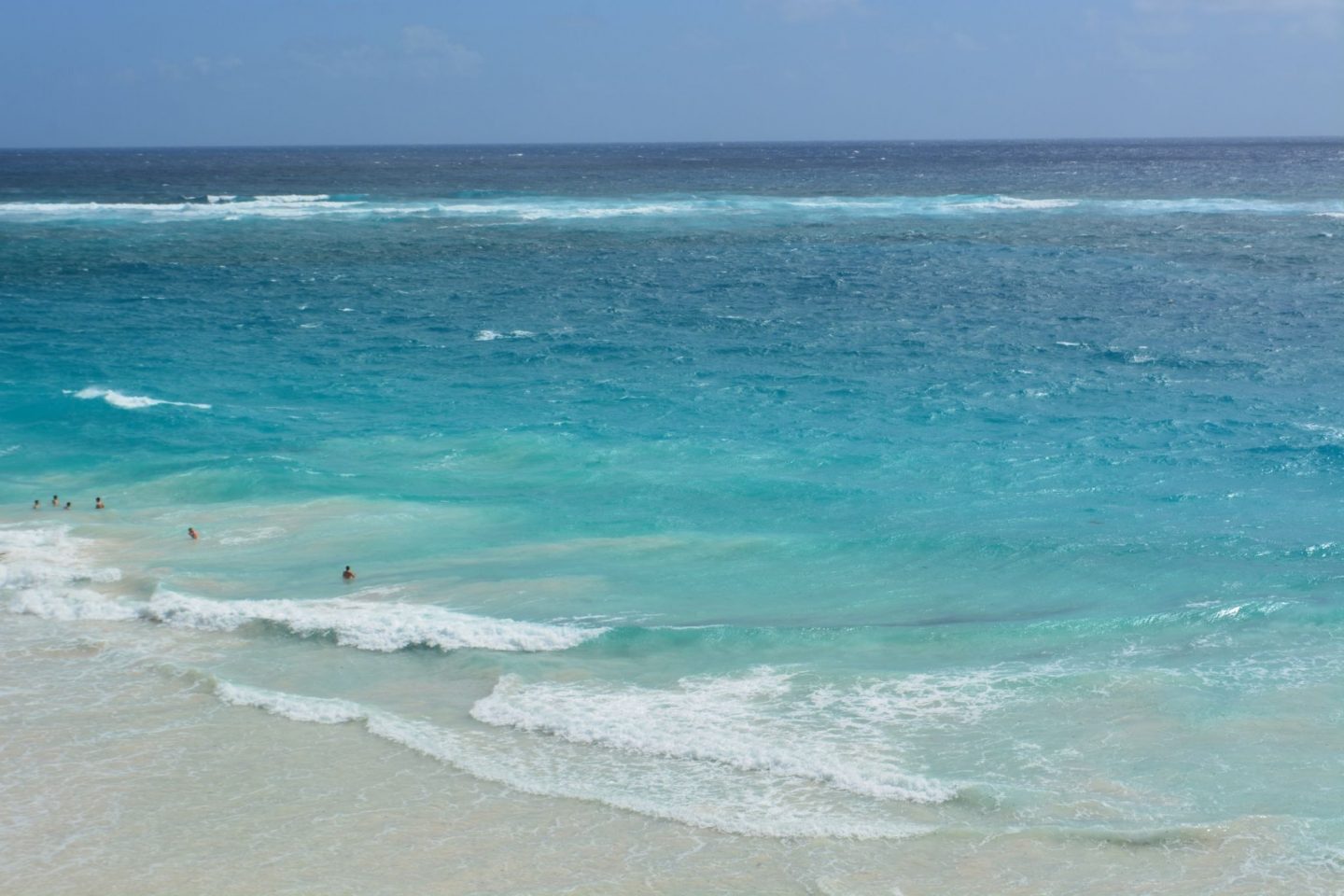 We all filed back into the van and we began the long drive all the way back to the other side of the island where we started to go to Carlisle Bay.

Now, Carlisle Bay was paradise. The sand was the softest, finest sand I had seen (and touched) in a while. The water was great, the beach wasn’t too crowded, and it was the time of day where the sun was strong but still not too strong. We quickly found a spot to settle down, rented out two beach loungers and an umbrella, and stripped down to our bathing suits. I wasted no time in getting into the water after getting a few pictures of this beach, which actually had pinker sand than Crane Beach in my opinion. I’m guessing you have to be standing on the beach to actually see the pinkness in the sand; it might not be something that can be visible from so far away because of how small the grains of crushed red shells are. 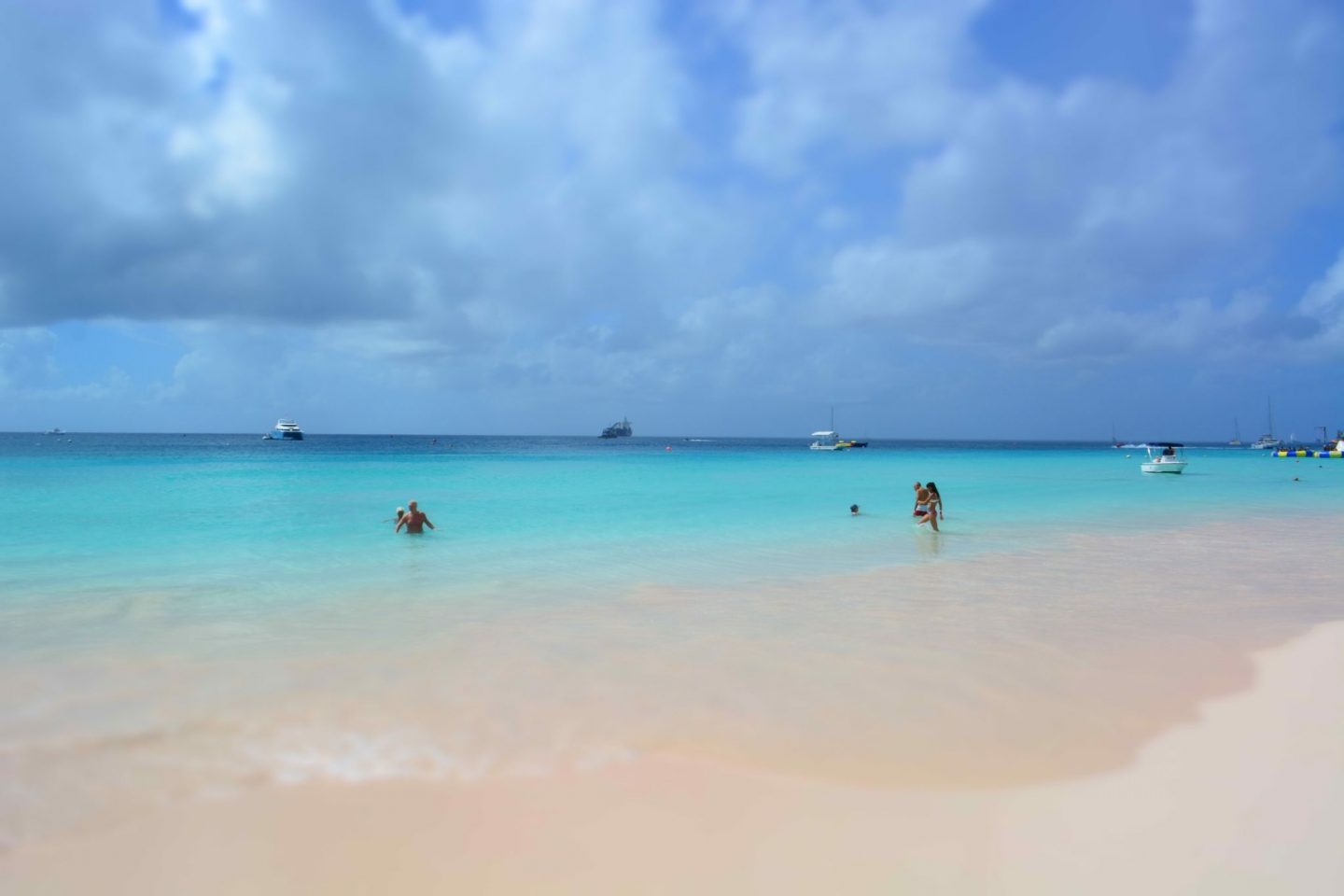 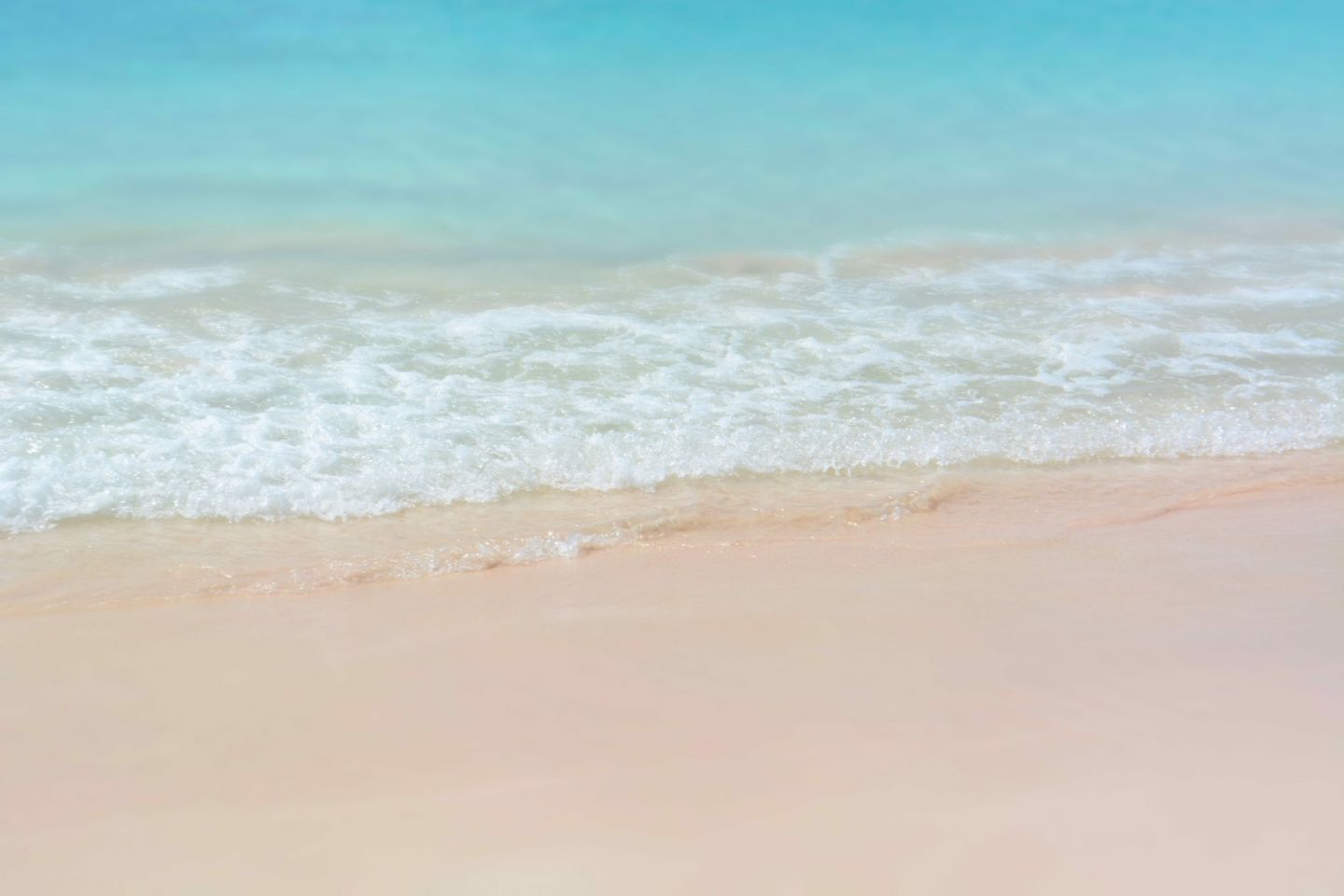 We swam around for a bit, did a couple laps, lay on our backs staring up at the sun and blue sky, and let the waves rock us around for a bit. The waves at this beach were huge – so much bigger than the ones at the other beaches we’ve been to so far on this trip. I tried sitting for a bit at the place where the sand meets the water and with each coming wave, I would literally get knocked down. Some were so big to the point where the wave would literally knock me out and it’d take me under. 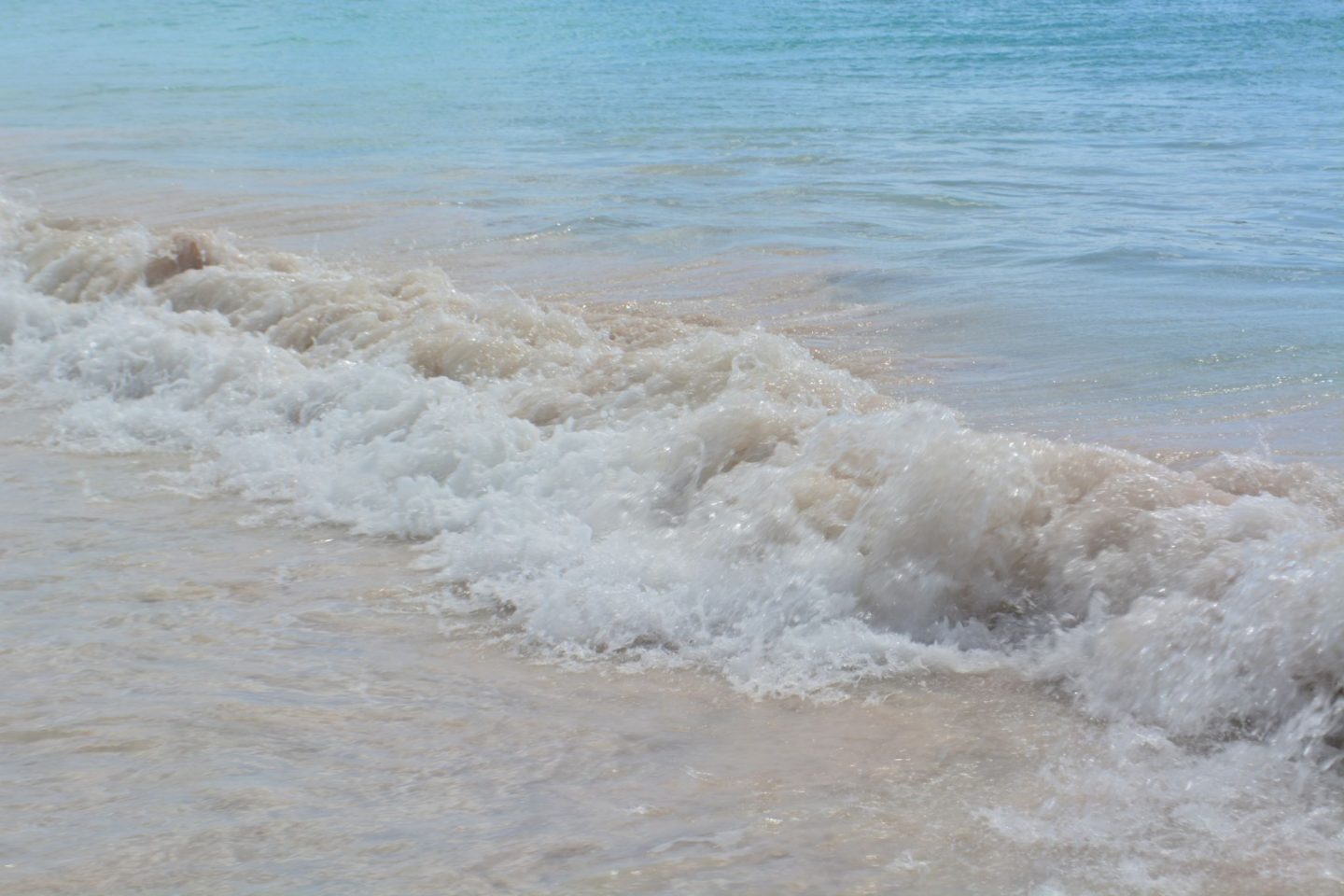 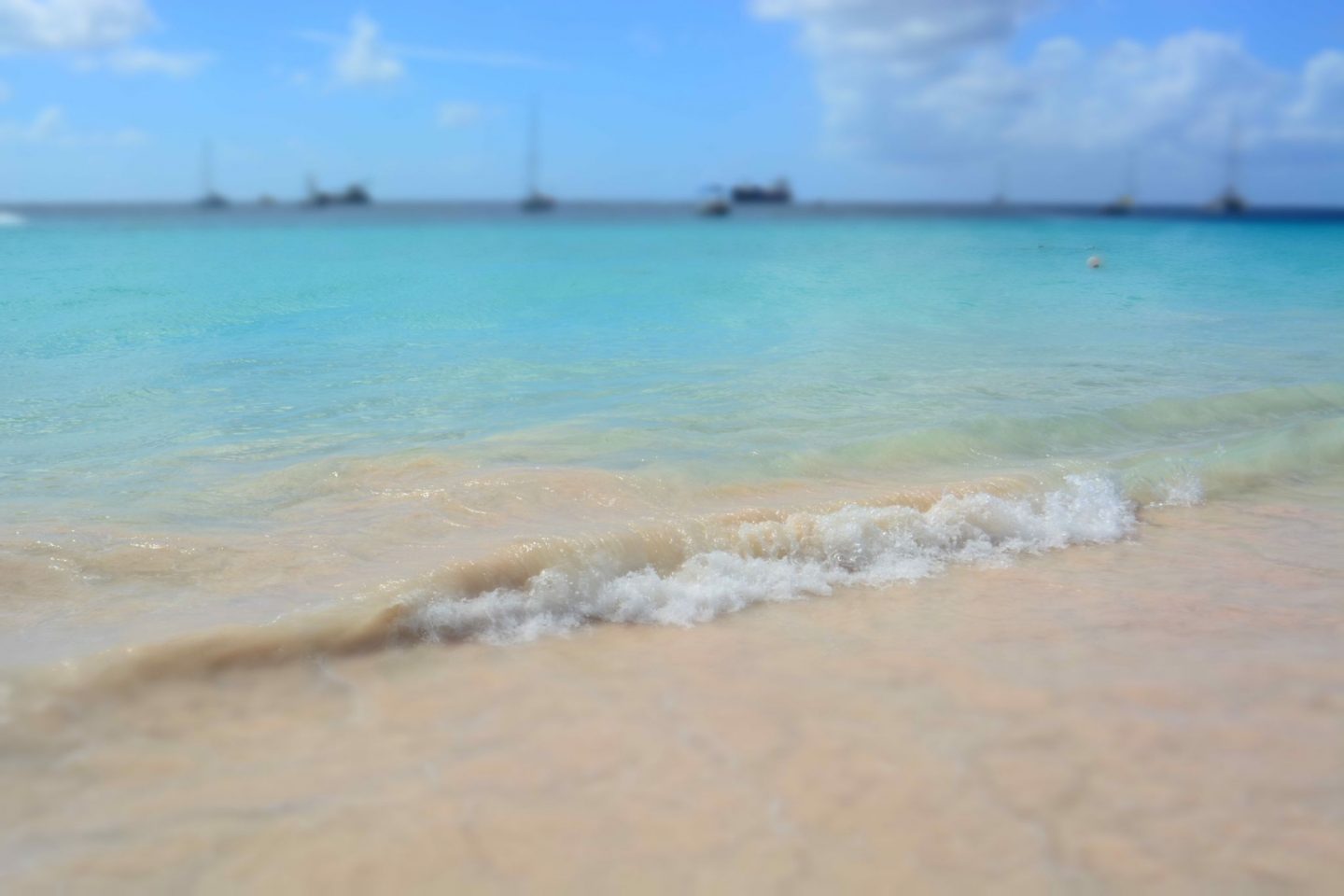 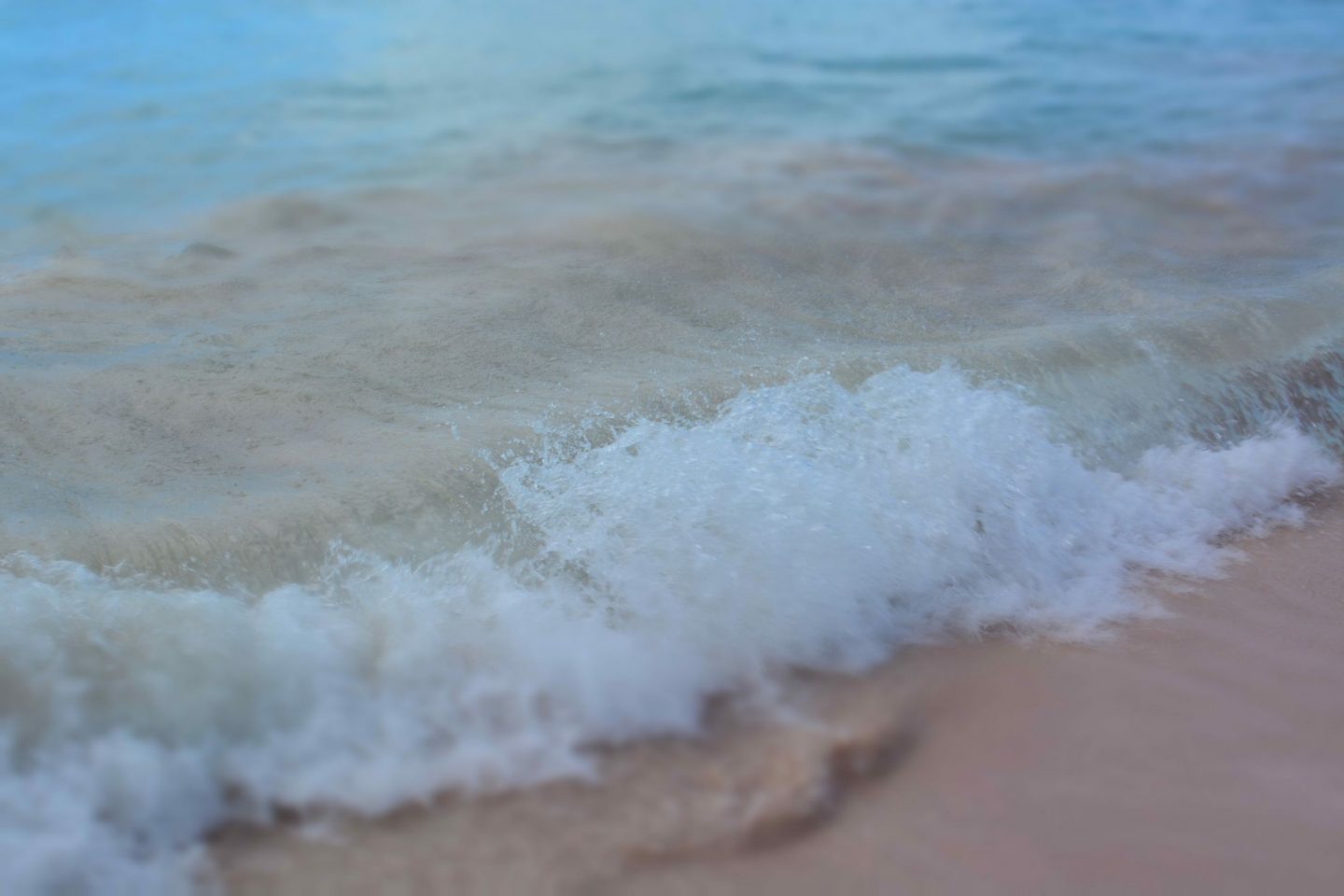 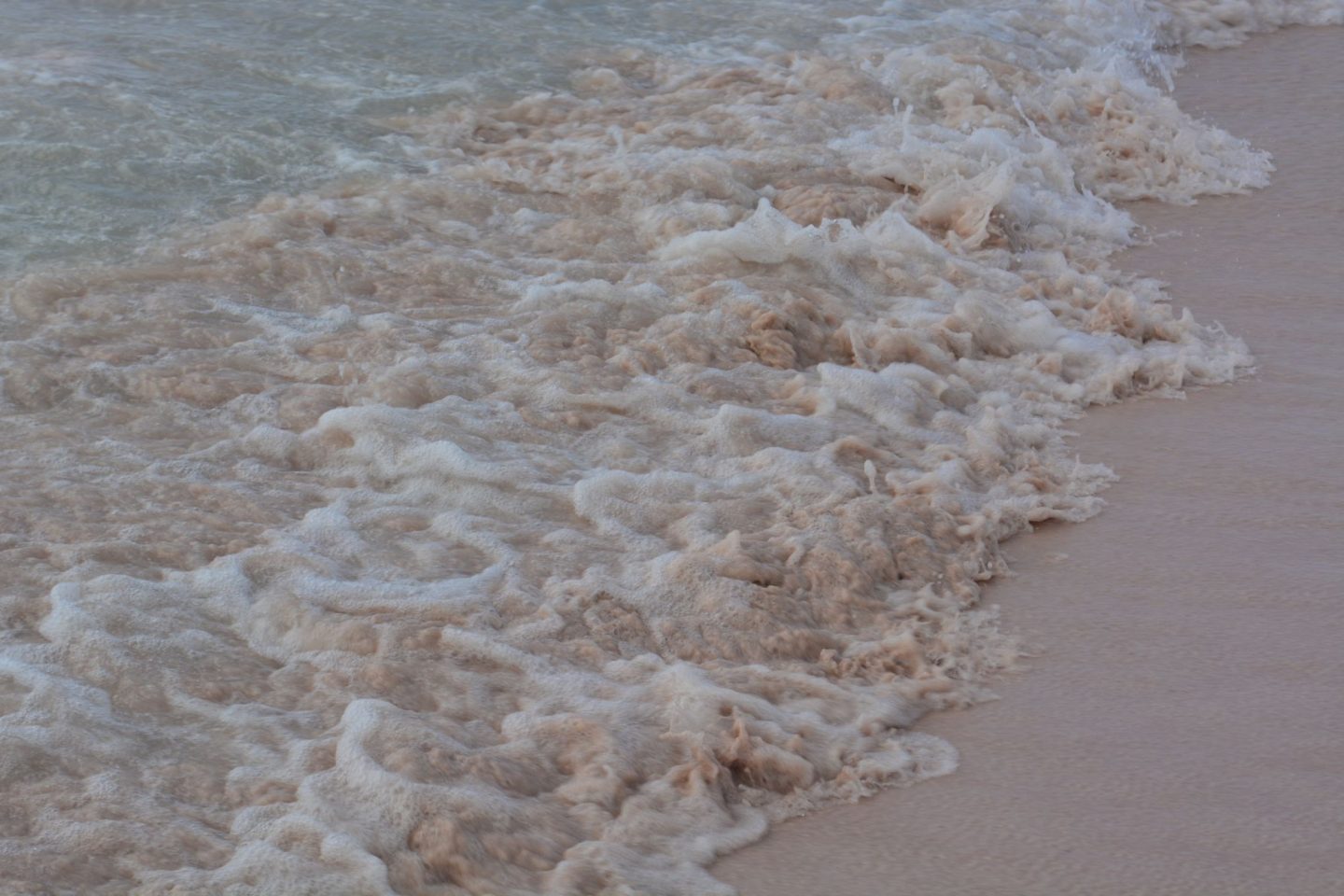 But that’s all part of the fun. I’m not one to complain about water.

After a bit more swimming, we decided to take a risk and try the jet ski for the first time. We were originally going to do the banana boat again but I thought to myself, “Why not be more adventurous?” I wanted to end off 2017 on a good – no, great – note. Riding on a jet ski, flying at 40 kilometres an hour, was the way to do it if you ask me.

We rented it for $50 for half an hour and after a very quick safety talk from the guy who was renting them (“Remember to make wide turns. Squeeze this to go. The harder the squeeze, the faster you go. Okay, you’re good to go.”)

I have to admit that I was nervous. I had done go-karting, I’ve done banana boating, I’ve done parasailing, and more. I thought this new thrill was going to be something just like riding a bicycle or driving a car. Steer, don’t lean off the side, and squeeze the trigger.

We hopped on, I tried to familiarize myself with how to drive and then we sped off into the distance. I didn’t want to go too fast at first, and with my first couple of turns, I was still feeling the nerves. Some turns were good, but some were wobbly and I also had this fear that the jet ski would flip over and we’d tumble into the water (which, if you consider that to be a worst case scenario, isn’t too bad)

My favourite part was honestly just going straight really, really fast. I held on to the handles and squeezed the trigger hard and we. just. flew.

The spray was in our face, getting into our eyes, but that didn’t matter.

Because we were flying.

At a speed like that, it honestly feels like you’re not even in the water anymore. You’re on the jet ski and the bottom of it is barely skidding the surface of the waves– you’re in the air. It was such a memorable moment and a freeing one.

So after half an hour, we headed back to where the lounge chairs were and we packed up our stuff, ready to head back to the cruise ship terminal. Instead of wanting to take a cab back, we were up to walk the 15-minute distance. That way, we’d get to see a bit of the town as well. 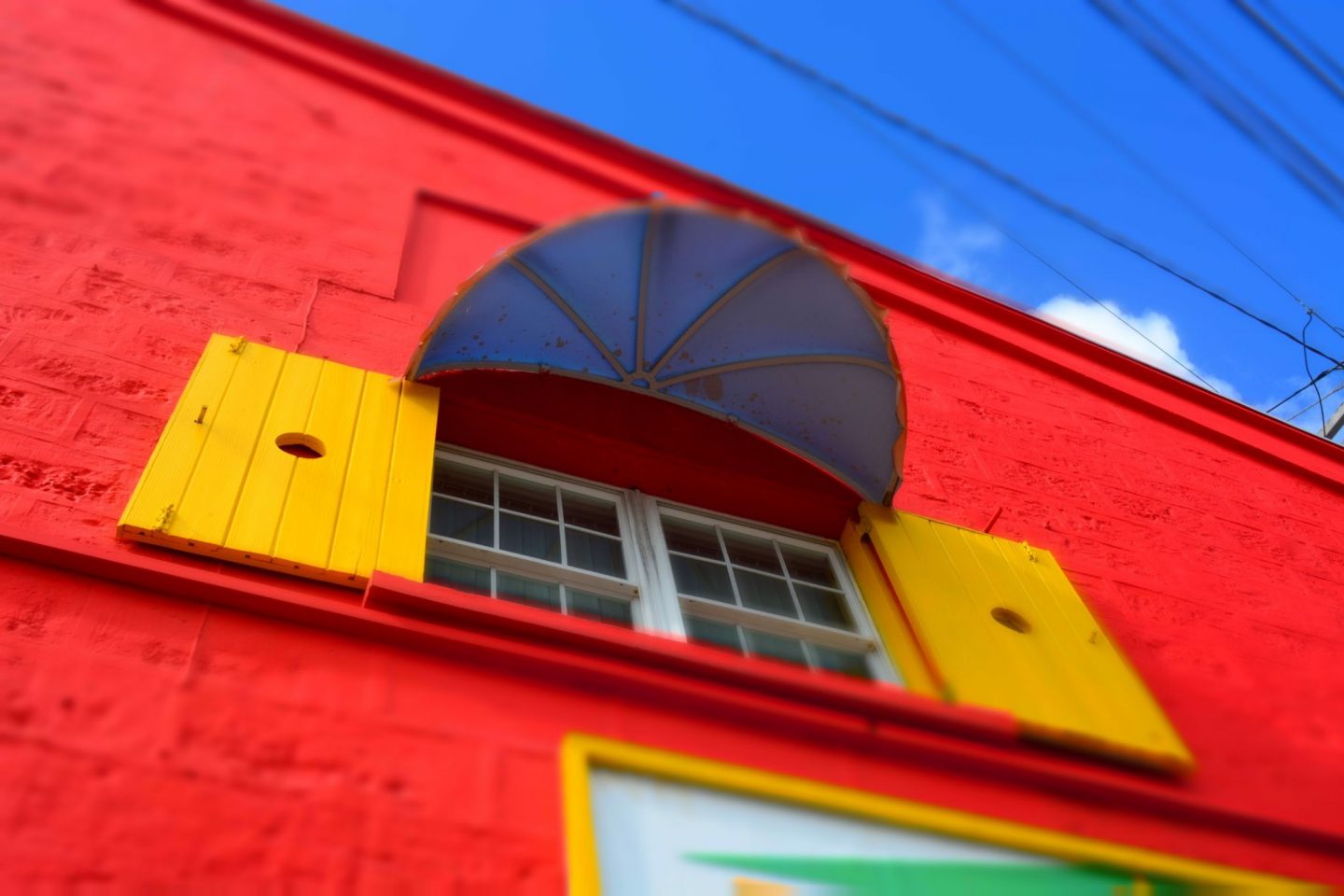 It was a stellar idea. We got to see a bit of the main downtown street, we walked along the water’s edge, and got to poke our heads into a few souvenir shops to buy some gifts. 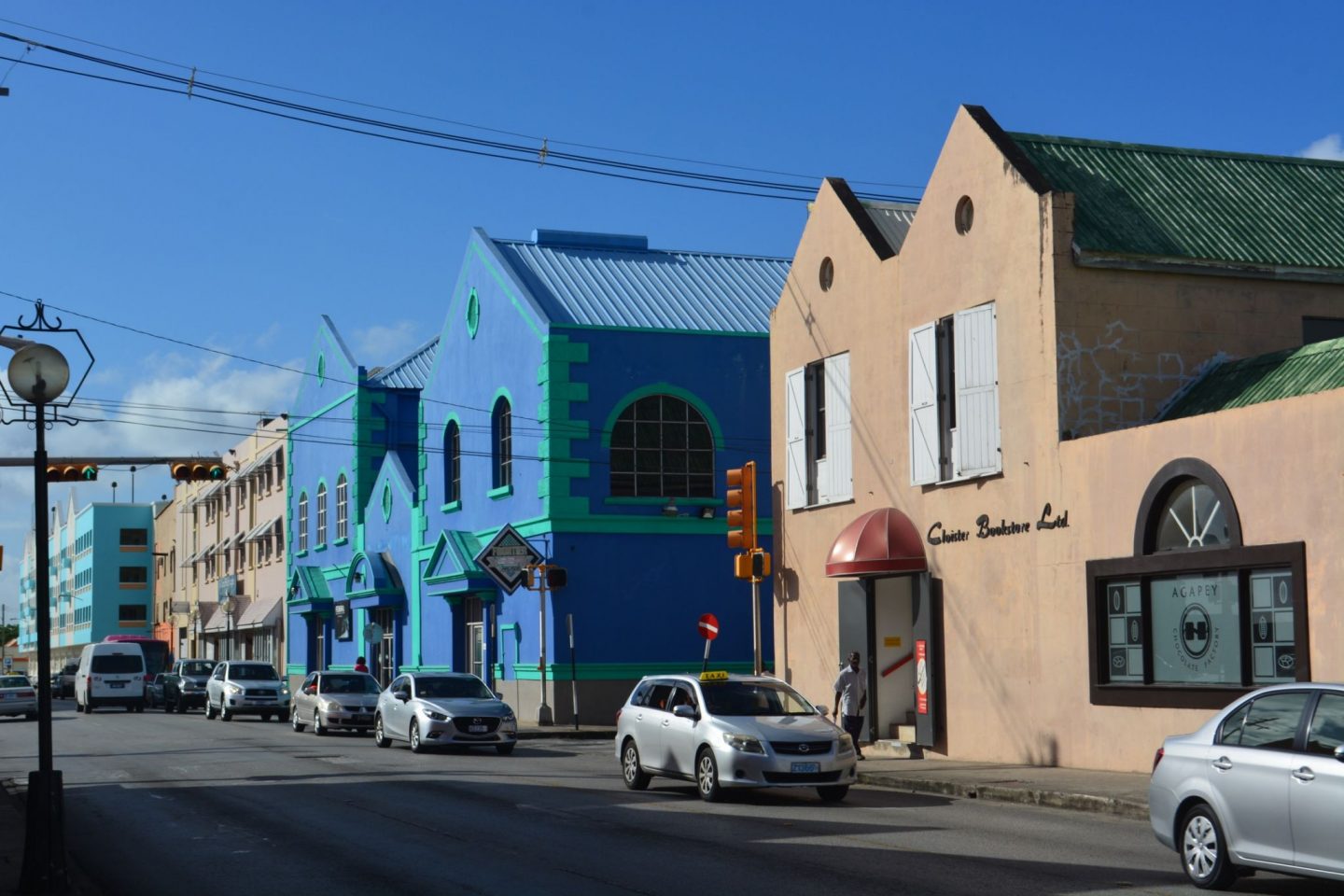 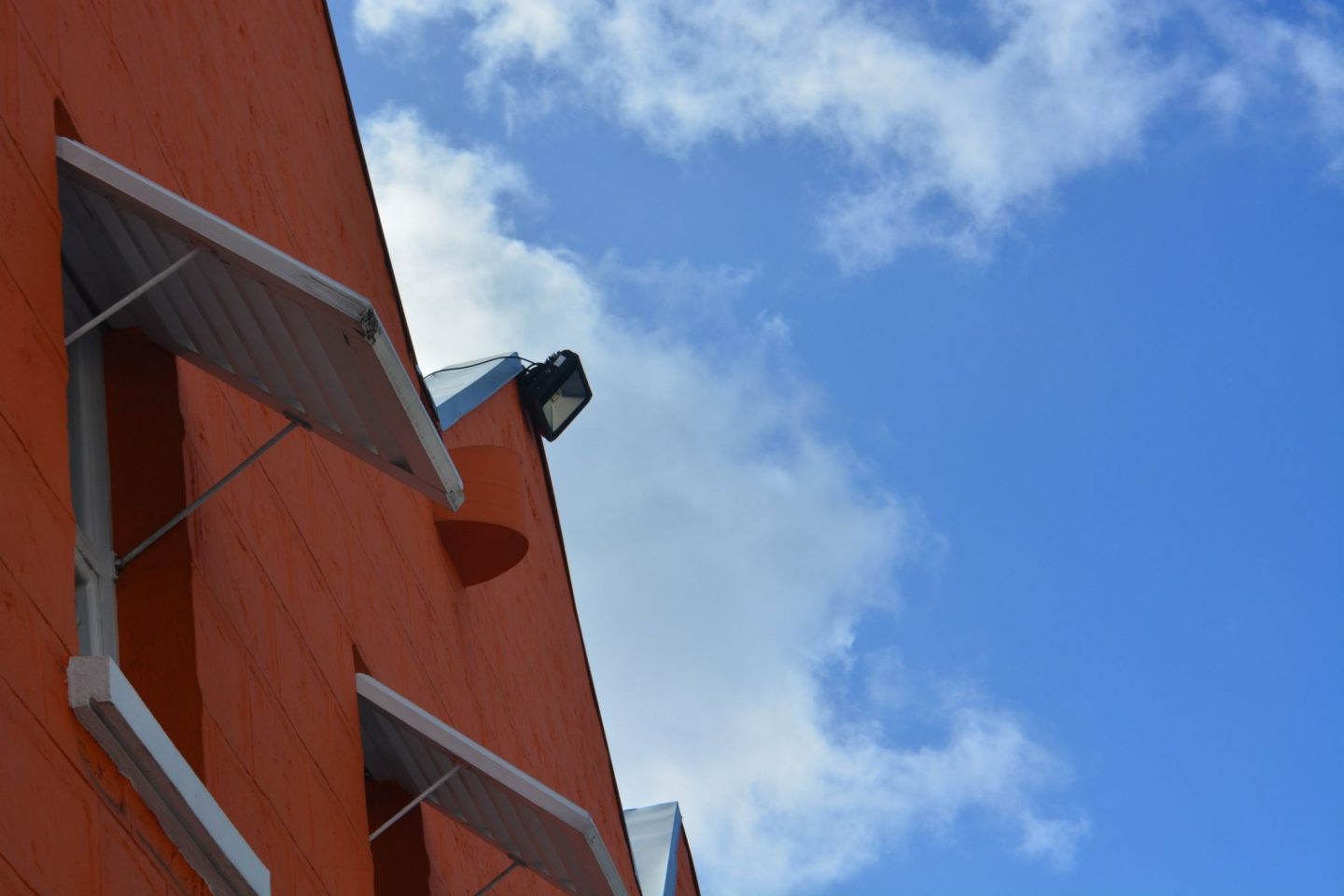 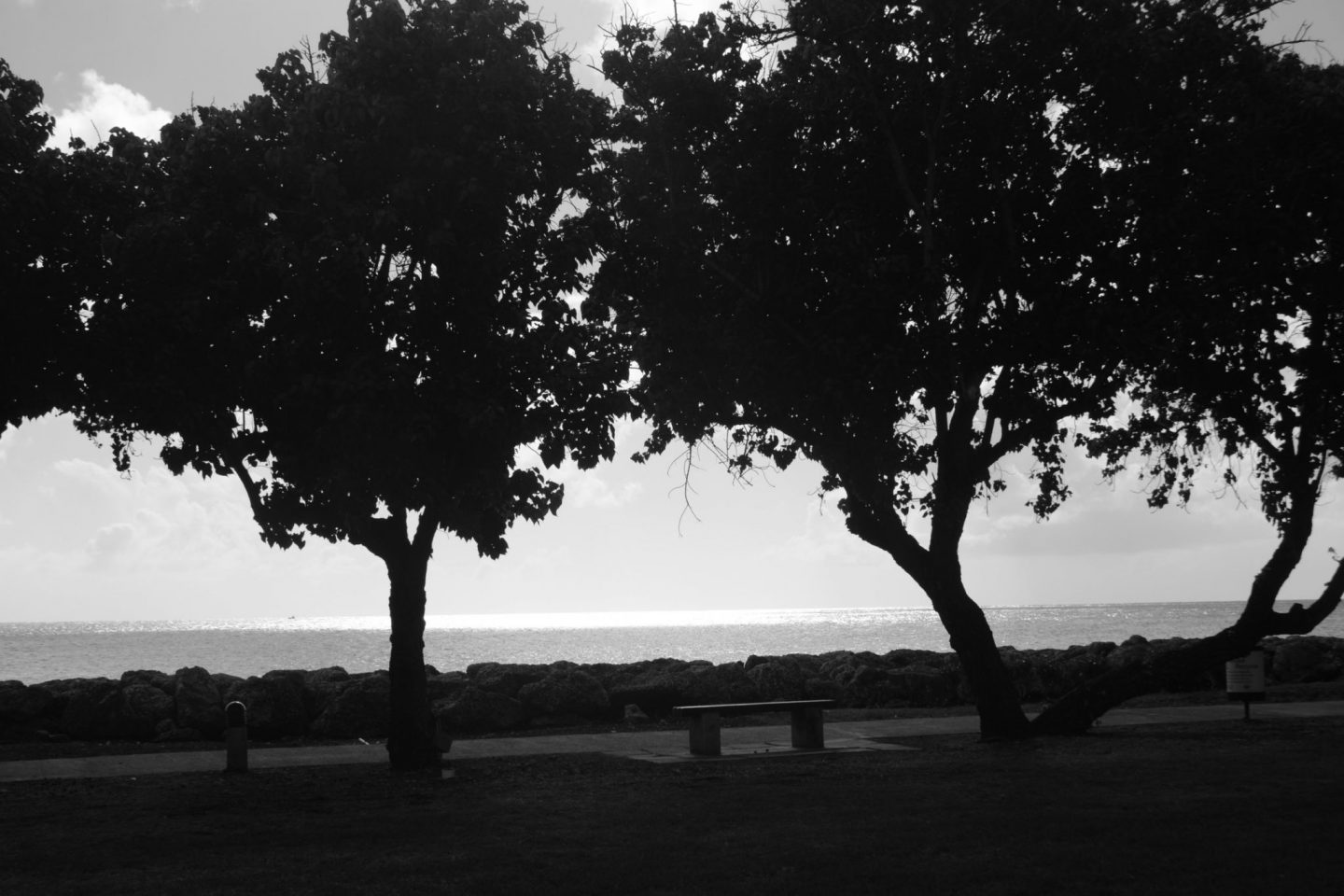 I loved the pastel colours of some of the buildings. 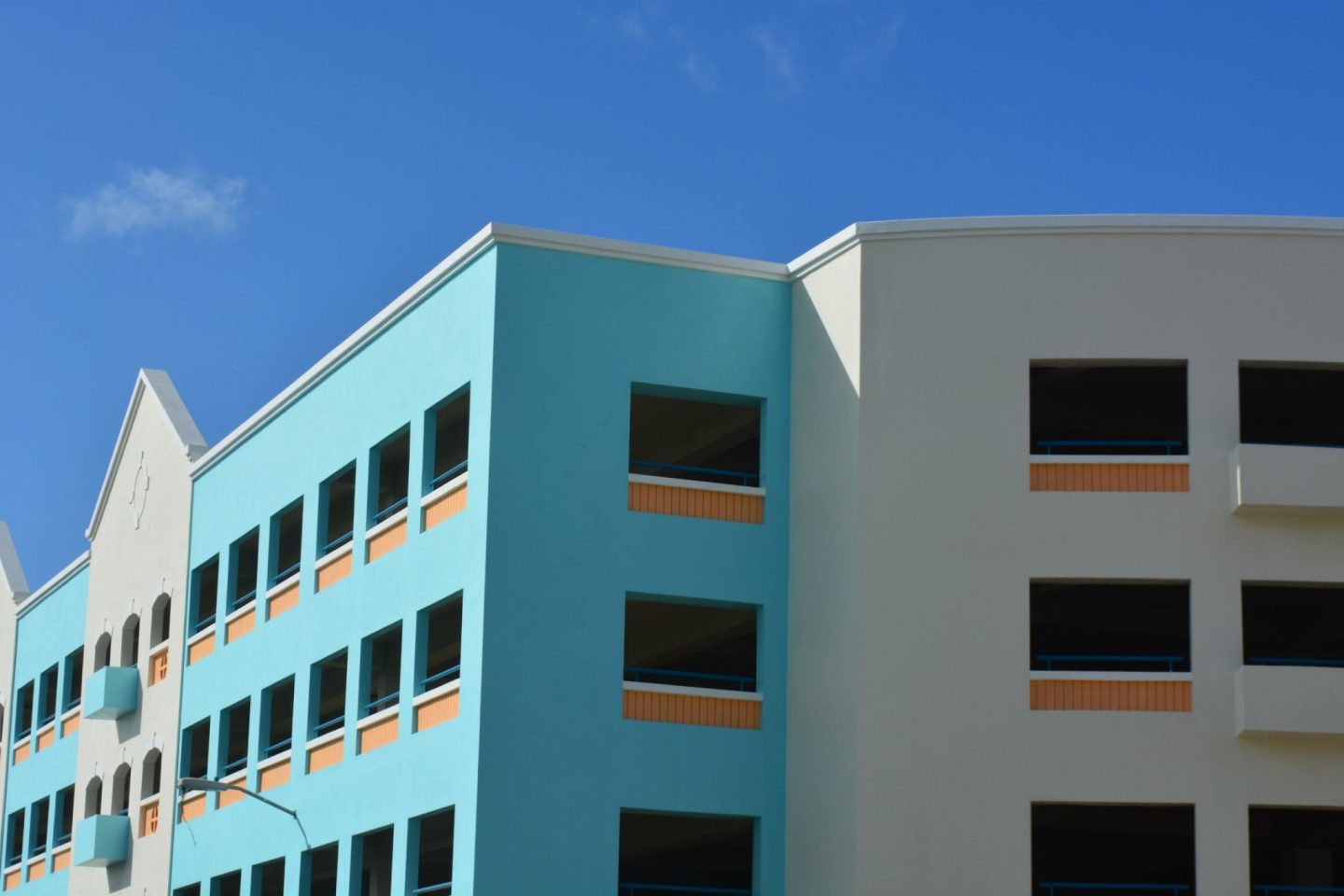 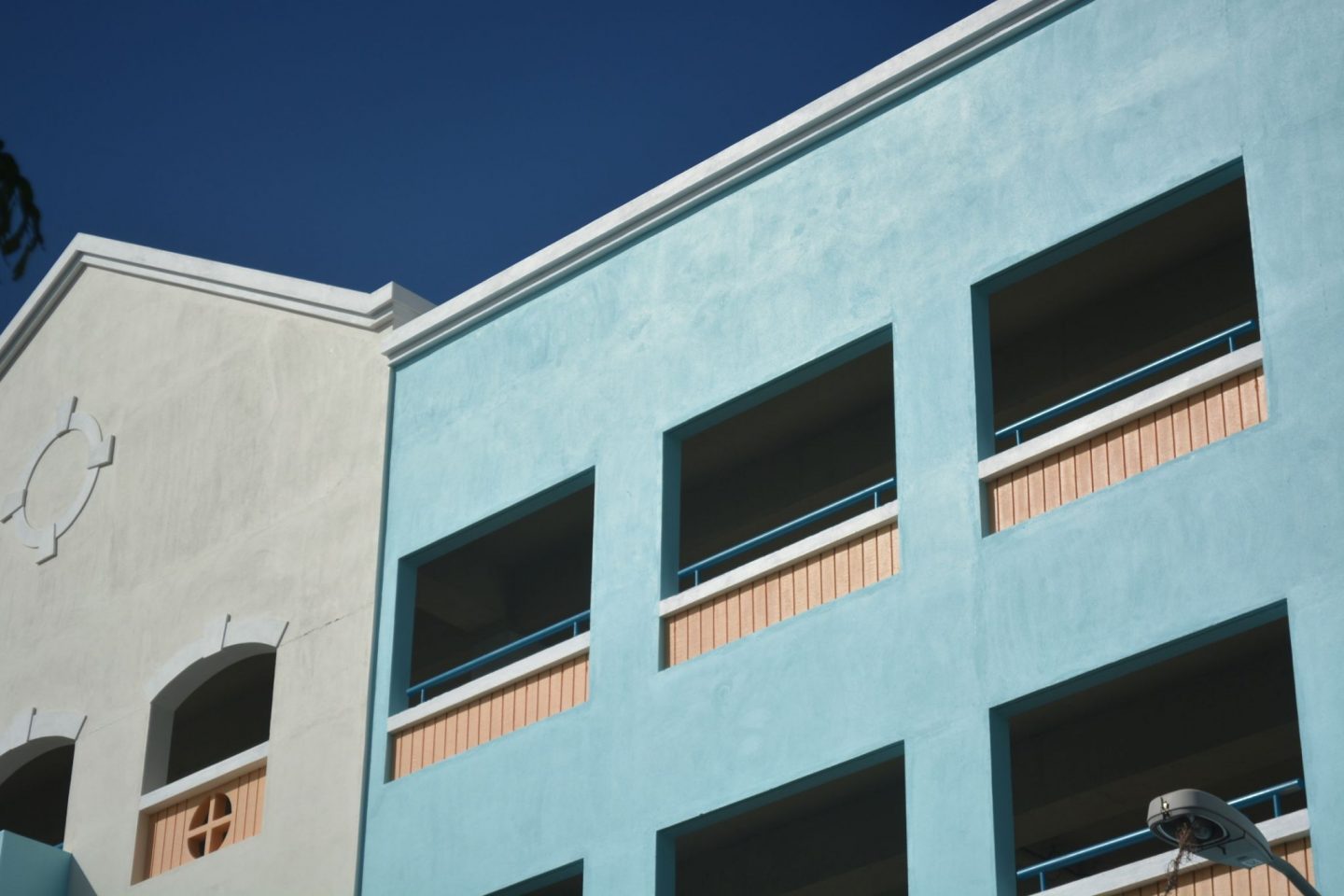 And to end off the day was the sun, absolutely dazzling and radiant, again. 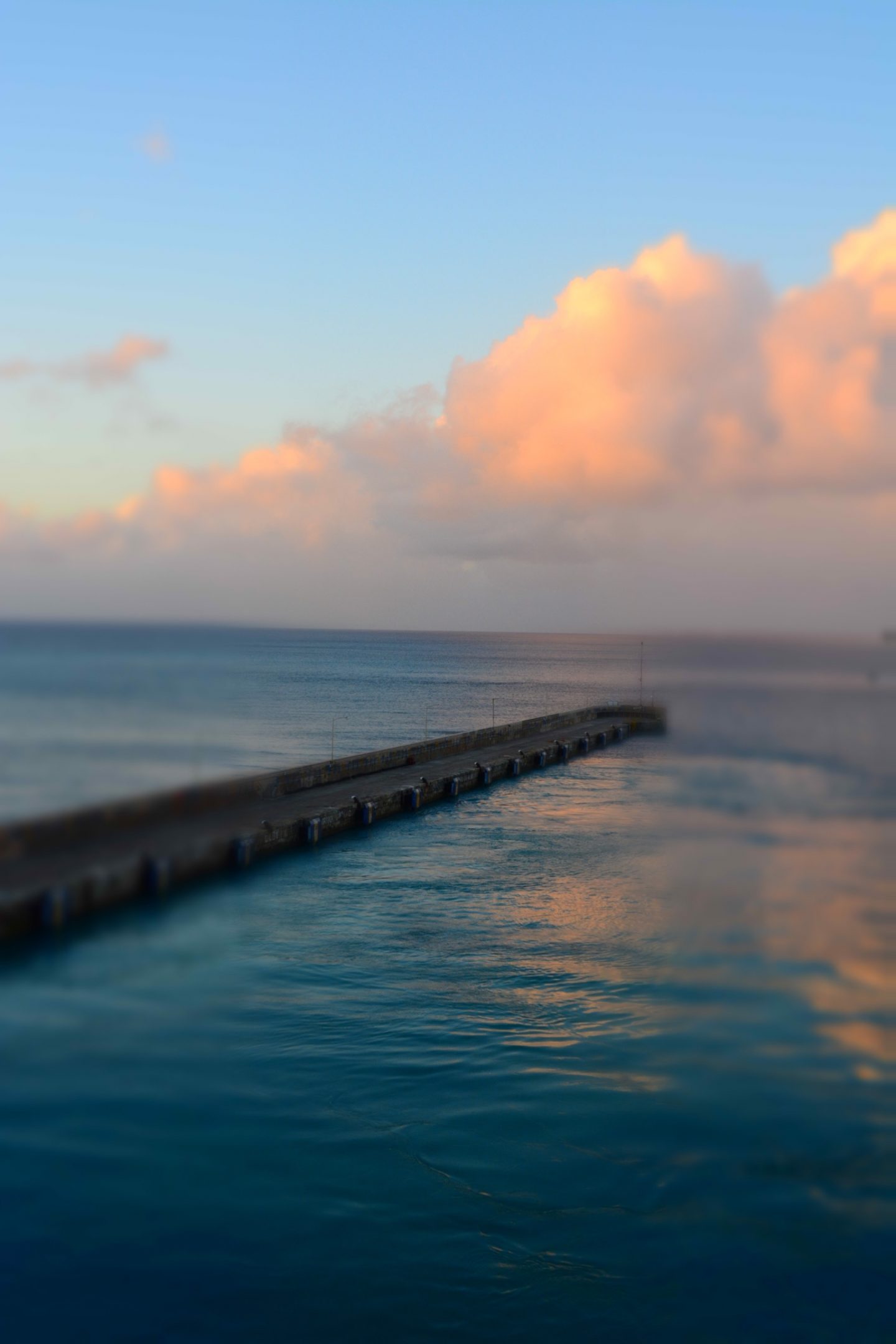 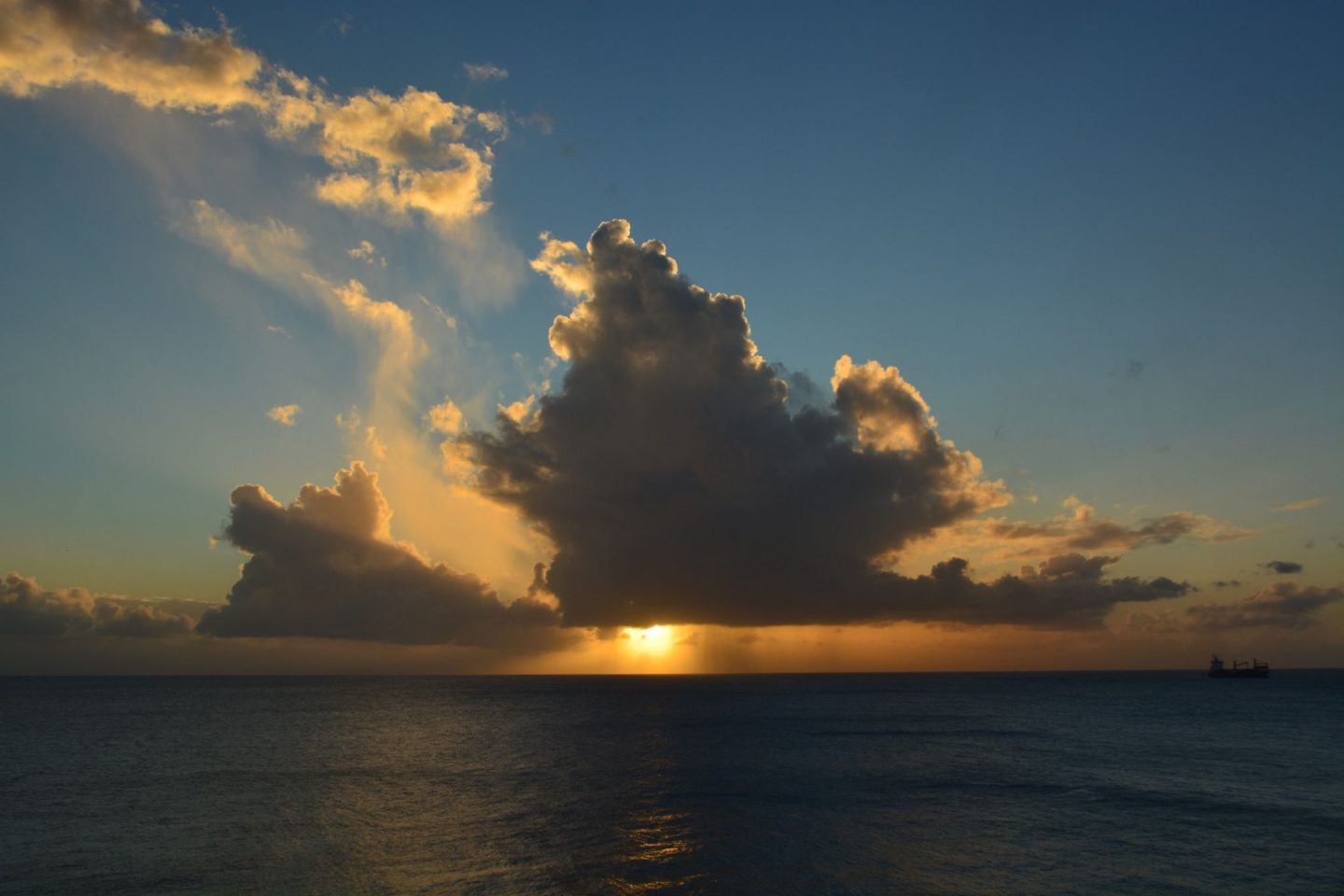 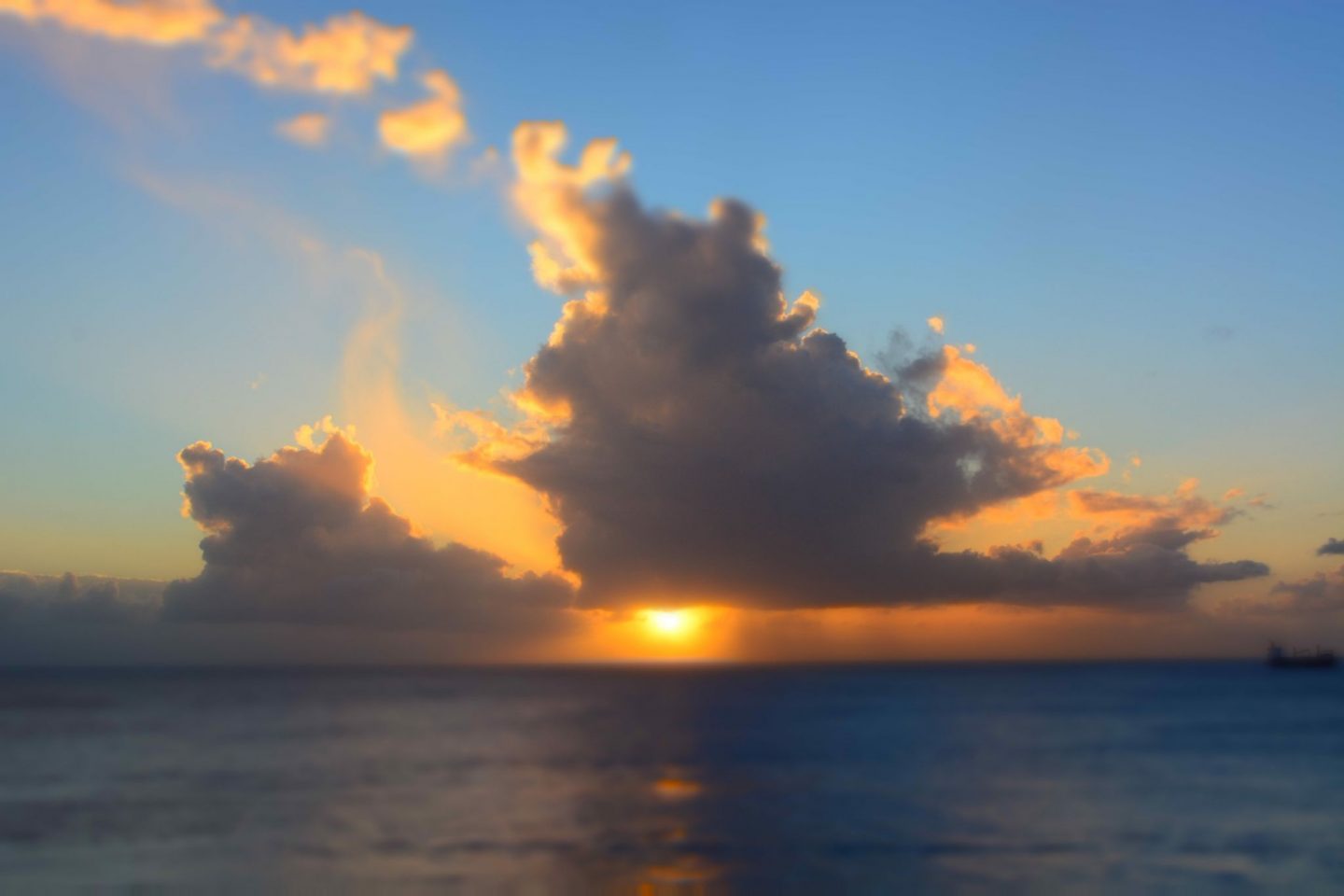 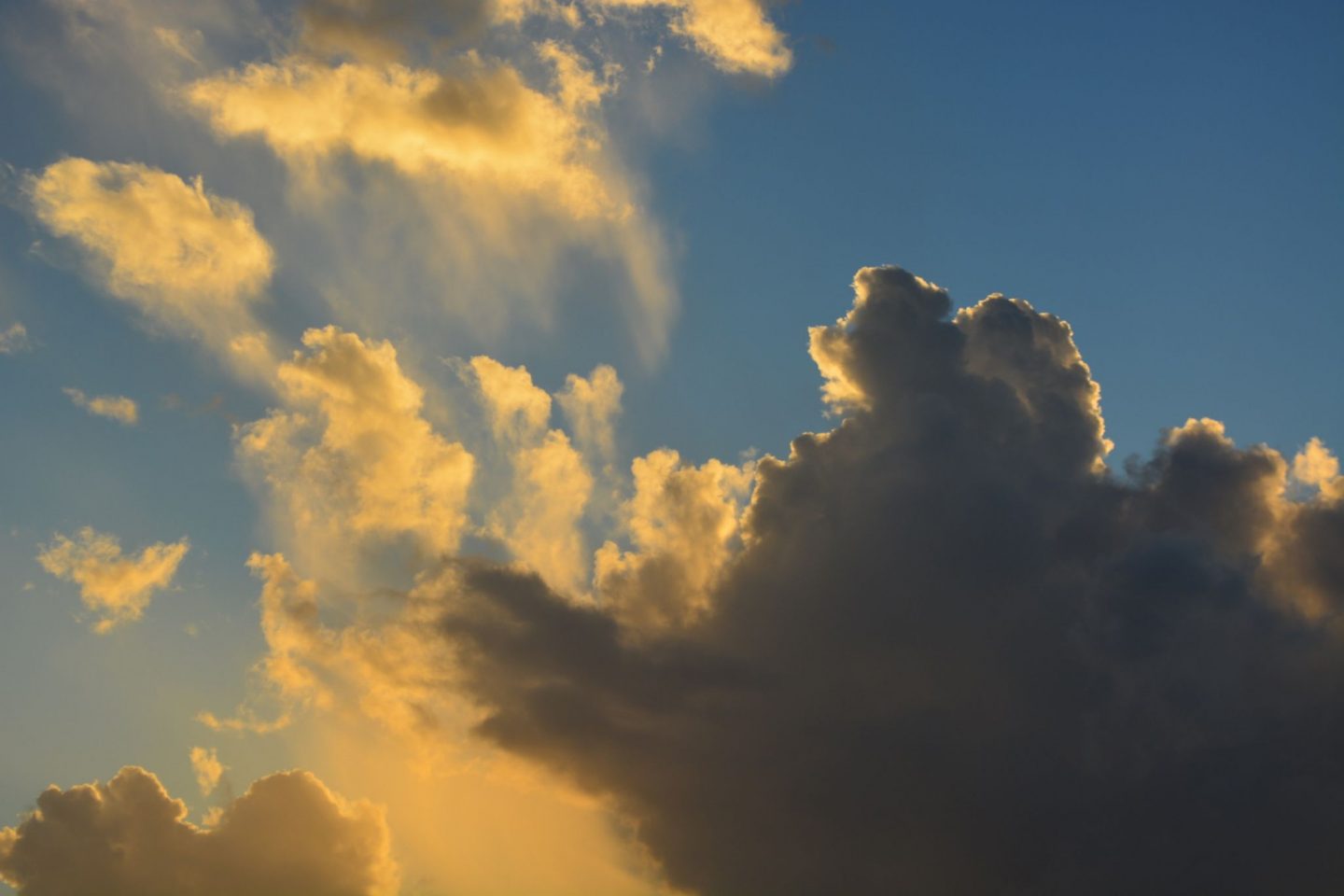 Stay tuned for the next post on Trinidad! If you thought the waves at Carlisle Bay were huge, you won’t want to miss the pictures of Maracas Bay – they’ll blow your mind.