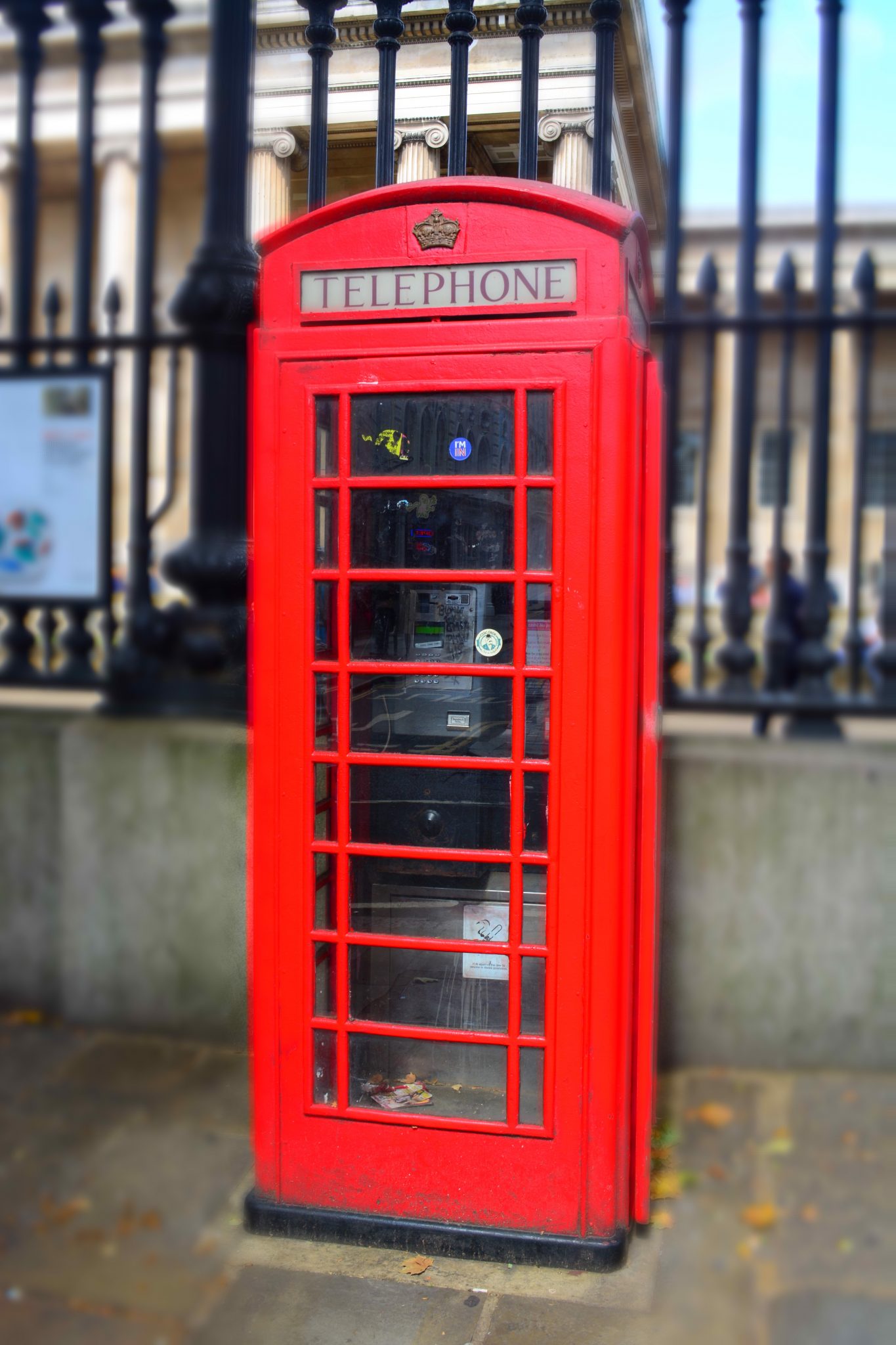 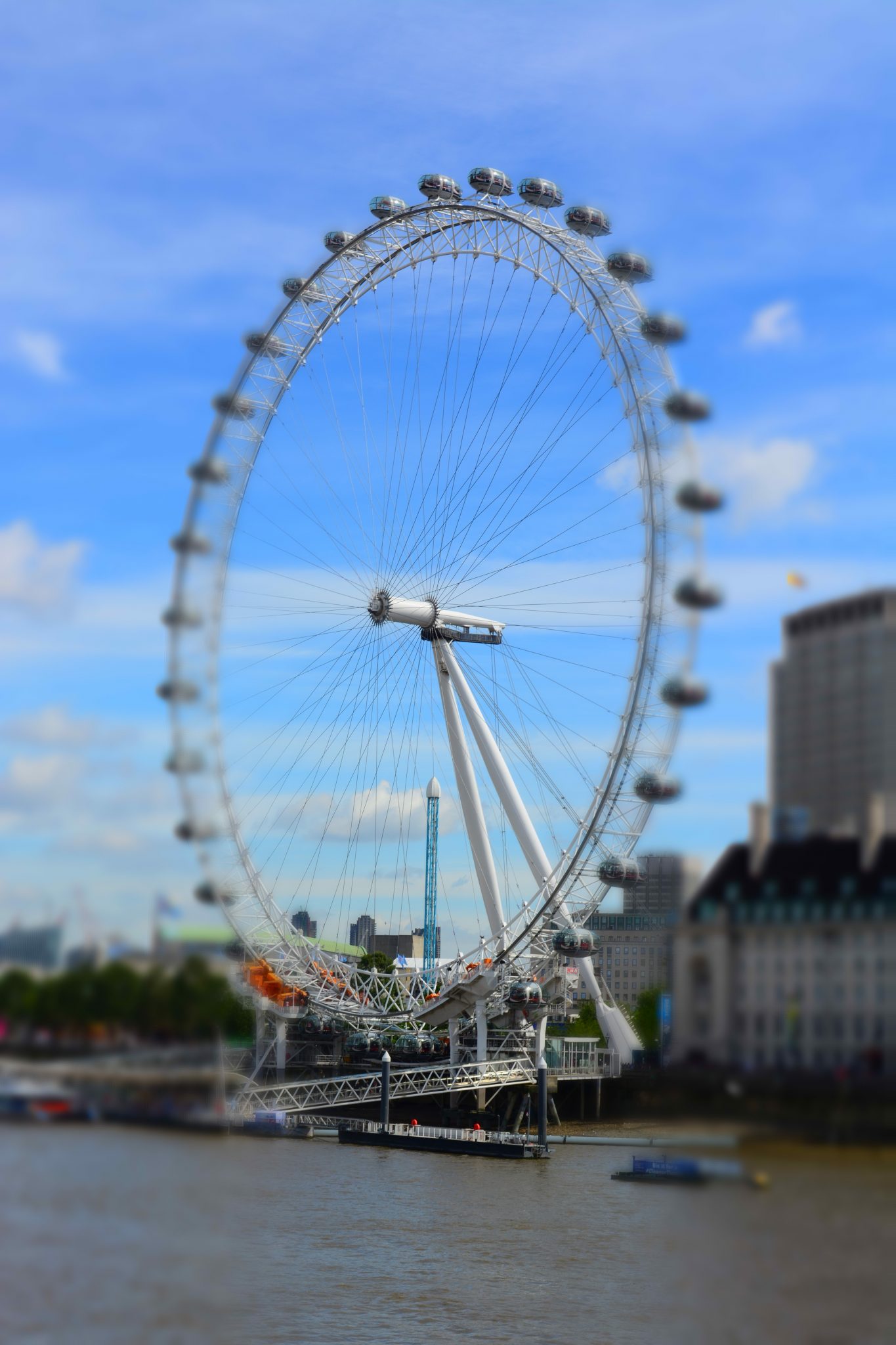 The last day in the city of Red (black and white in my camera lens, sometimes!). Oh, how I miss it to this day. No vacation is better spent than just wandering around a city, map and camera in hand. Especially a city as amazing and as full of culture as London. We were all extremely sad that this was the last day in this glorious city, but we were all looking forward to the cruise we were about to embark to the fjords of Norway! A bitter-sweet ending in London, you could say.

We started the day off with a walk to the famous Trafalgar Square. Perhaps the most noticeable symbol of the square is the lion sculpture, as pictured below. Whether it’s on the news, in movies, or in print, it is highly likely that you have seen these famous felines before. Trafalgar Square is a public square in the City of Westminster and it is often referred to as one of London’s most vibrant spaces in the middle of the city. The square is surrounded by museums, galleries, cultural spaces, historic buildings, little restaurants and cafes, souvenir shops, boutique stores, and so much more. There’s so much to do and so much to see, here. My advice is to walk to the square. If this isn’t possible, take a cab TO the square and then take a bit of time to walk around the surrounding area to see it all. It is really impossible to truly see all that the square has to offer when you’re whizzing by in a car. 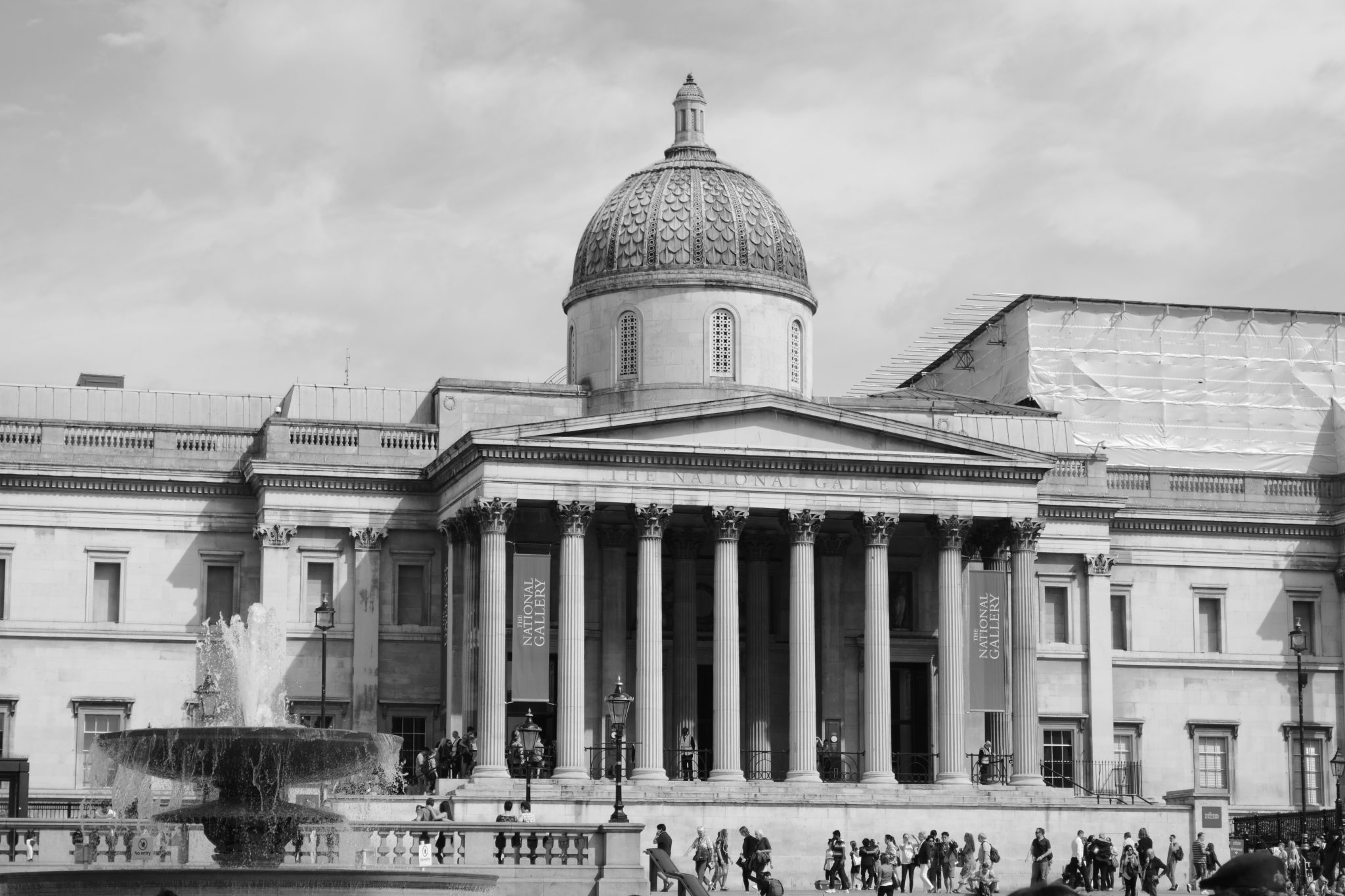 The National Gallery, London. Definitely worth a visit! 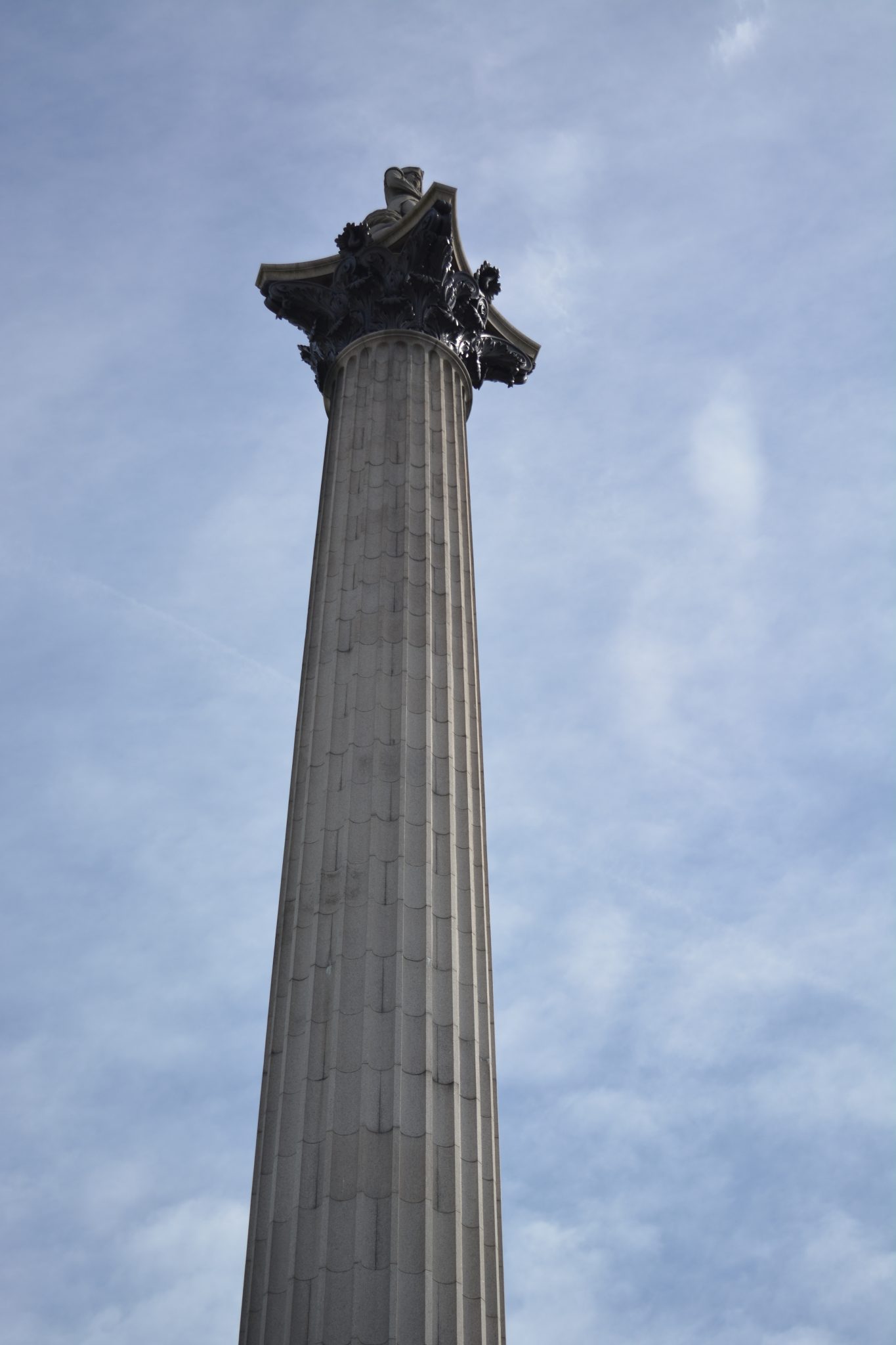 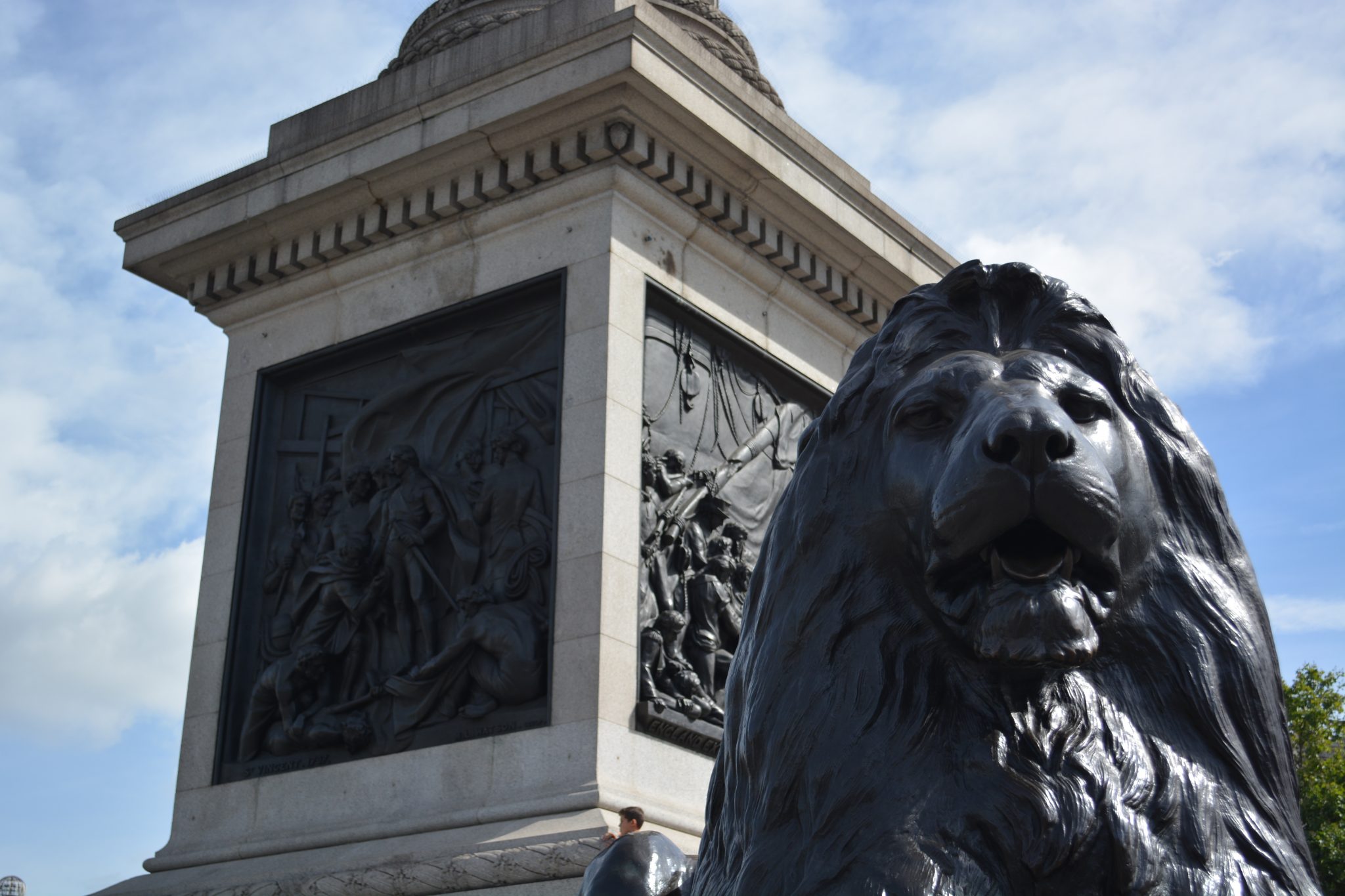 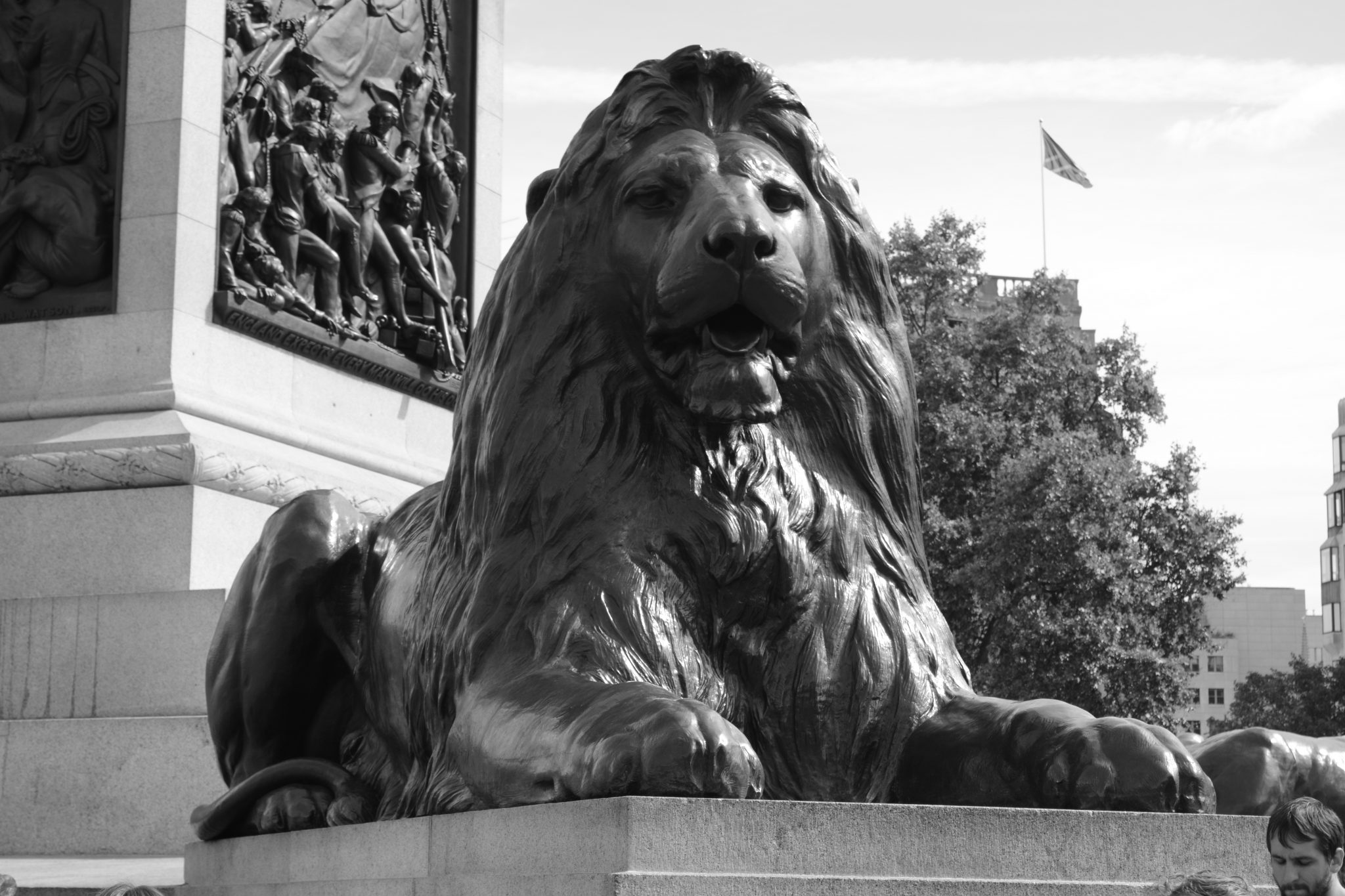 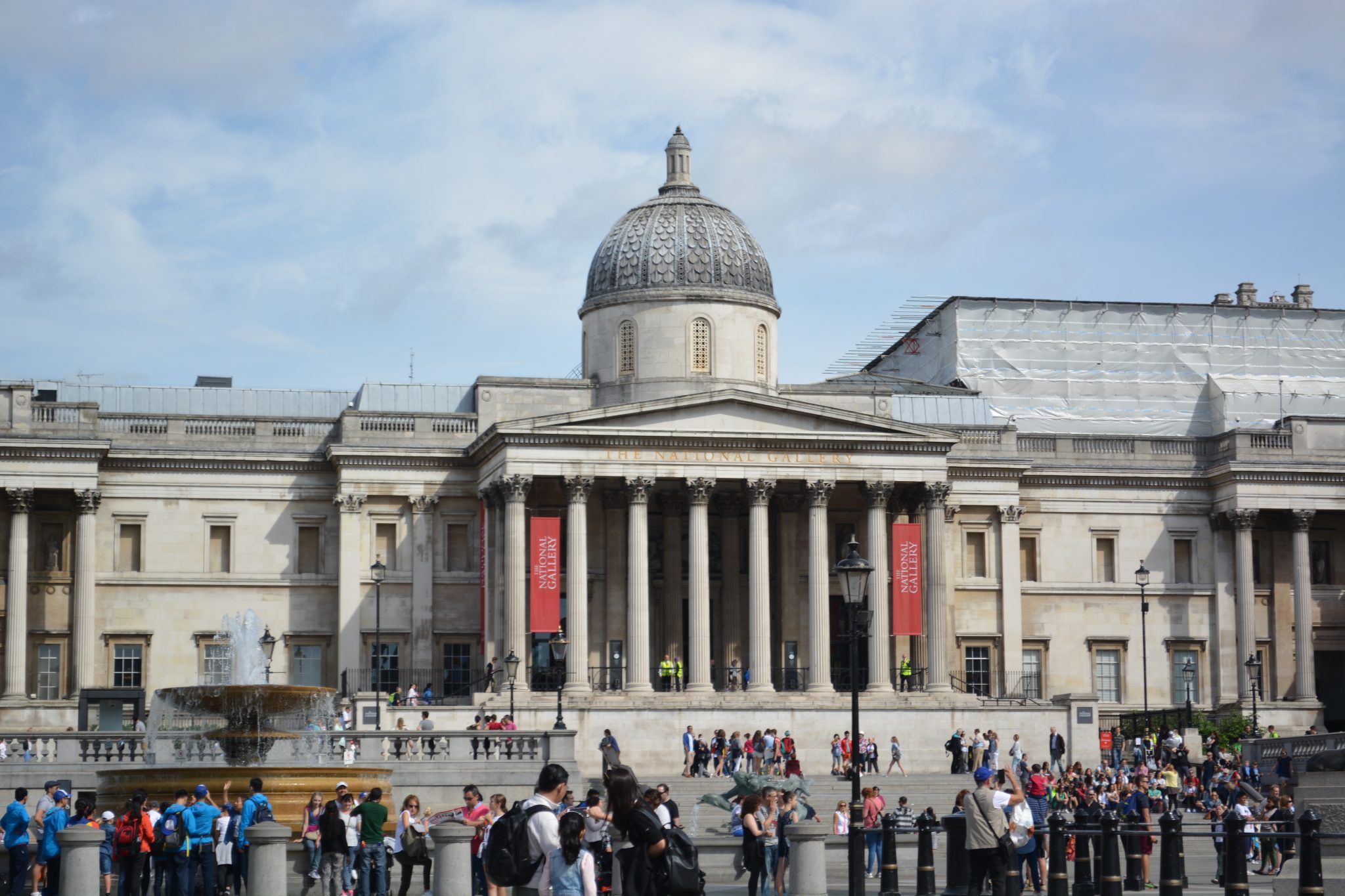 After a short walk through this busy part of town, we proceeded to walk towards Downing Street. Even though we were here last time around, we just wanted to make a quick detour and head over to see whether or not things have changed. 10 Downing Street, to be more specific, is the headquarters of Her Majesty’s Government and the official residence of the Prime Minister. Essentially, it is where the “head of Parliament” resides. It isn’t incredibly beautiful or breathtaking from the outside; it’s literally just a black door with the number 10 on it. It’s a pretty popular landmark in some movies, especially the British ones! Now, unfortunately, they’ve stepped up the security there and visitors aren’t allowed past the main gates. It’s surrounded by guards and police officers, and because of this, we didn’t even get a good look at Number 10, as the Brits call it.

We then head off to our main destination for the day: the Shakespearean Globe Theatre. This theatre is a reconstruction of the original Globe Theatre, an Elizabethan playhouse that was originally built in 1599. Unfortunately, it was destroyed by a huge fire in 1613 and then rebuilt in 1614. It was then demolished in 1644. The modern Globe Theatre reconstruction that you see in the pictures I took below is an academic approximation based on available evidence from the 1599 and 1614 buildings. It first opened to the public in 1997 with a production of Henry V. I absolutely love select Shakespearean works. I’ve read ‘A Midsummer Night’s Dream’, ‘Twelfth Night’, ‘Romeo and Juliet’, ‘Julius Caesar’ and ‘Macbeth.’ The themes he writes about and the way he writes about them… sometimes, it just leaves me speechless. Macbeth was definitely my favourite tragedy, which is why we decided to go see the play that day in London. 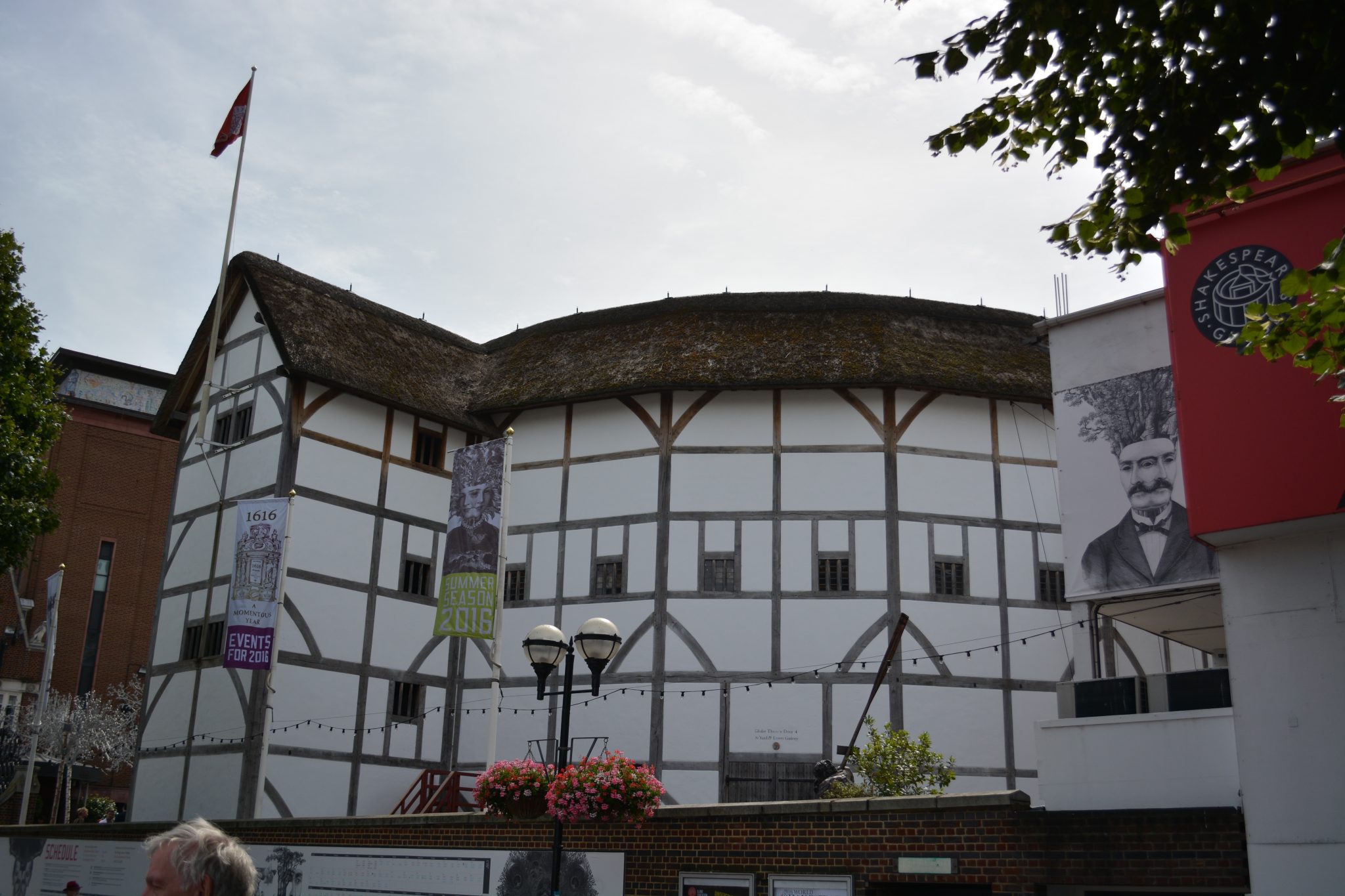 Accommodates about 1400 spectators each show! 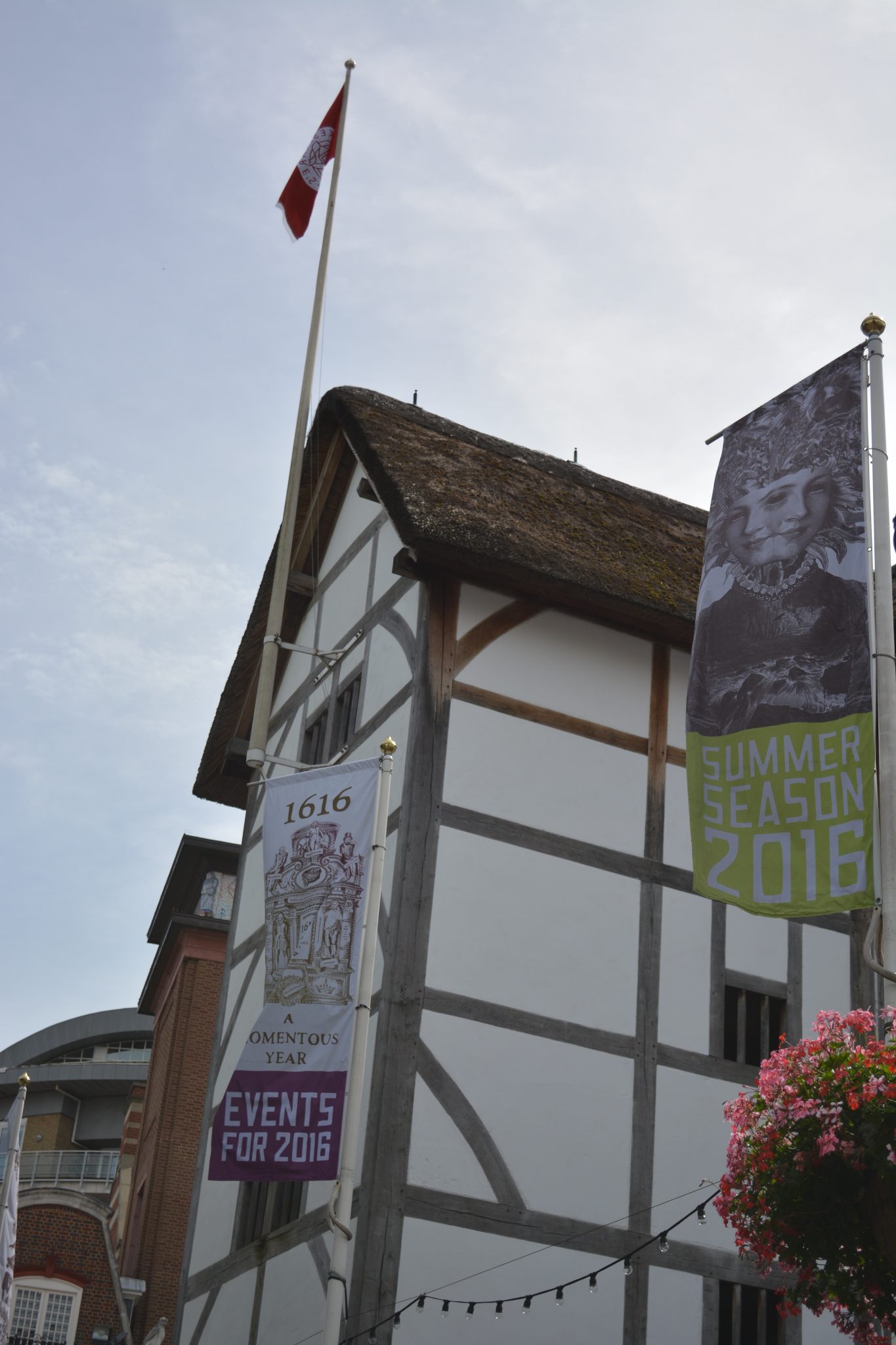 If any of you are interested in going to see a play at the Globe Theatre, make sure you buy tickets on their website WELL IN ADVANCE. We didn’t do this and only went on the website to see which seats were available a few weeks in advance. I recommend at least 2 months, if you know for sure you are going. They didn’t have any good seats left that had a clear view of the stage, either in the Upper, Middle or Lower gallery. Most of the seats left were on the very side, and there was a warning of reduced visibility because of the poles blocking the stage. We decided to go with purchasing the 5 pound standing tickets. These “seats” are literally right in front of the stage, and for the entire duration of the play, you are standing there with a crowd of others watching the play. There is about 700 of these standing tickets available for each production. 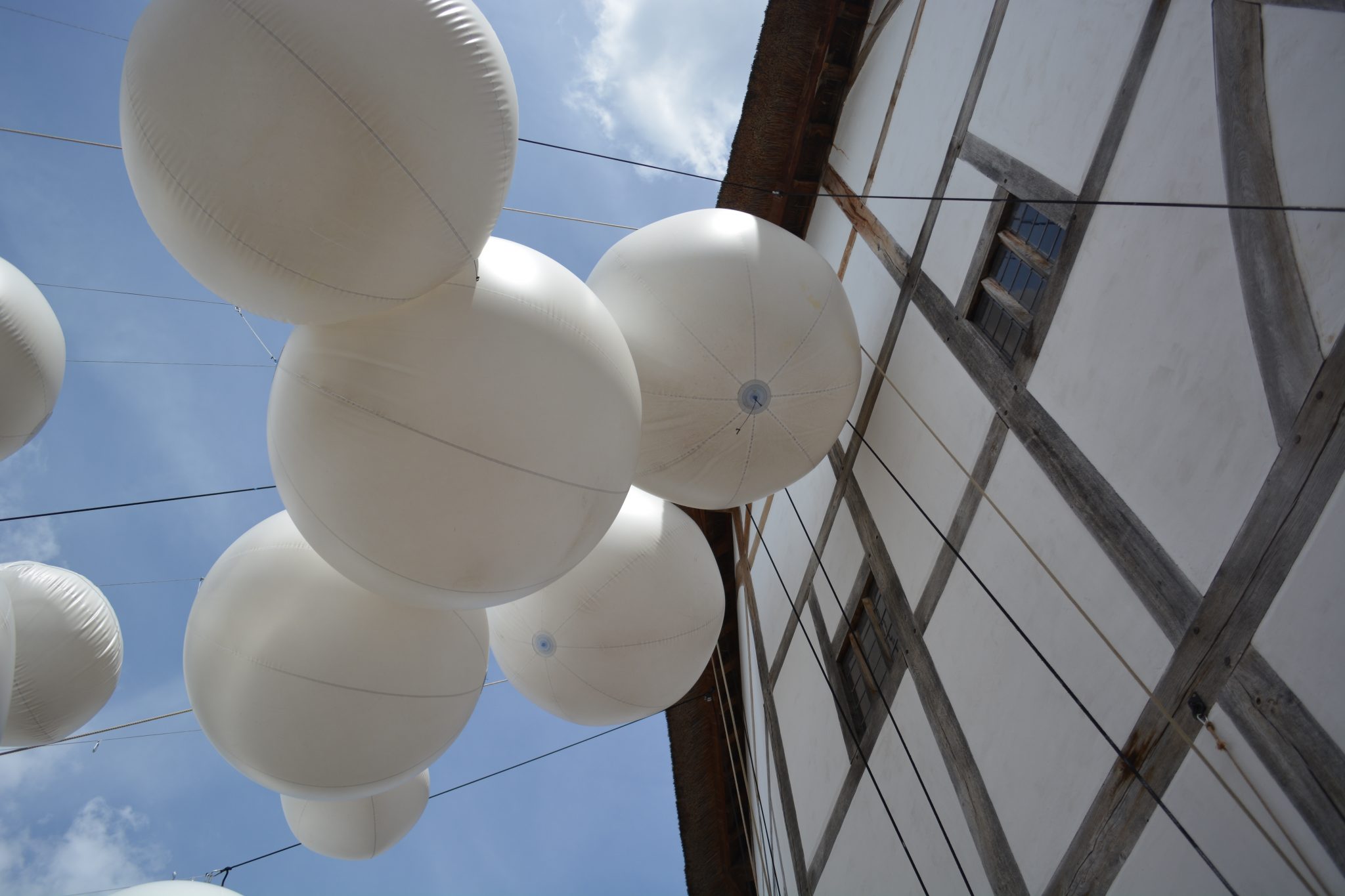 The play was at 2 pm, however, doors usually open a half hour in advance. If you have standing tickets, make sure you go AT LEAST one hour before the time of the show. We went a little before 1 pm and saw that there was already a short line up starting for the “ground tickets” After all, the standing spots you get are first-come, first-serve and if you want a good position near the front, you’re going to have to line up. A tip if you’re planning on buying standing tickets: it is A LOT of standing. Usually, the Shakespeare play renditions are at least 2 hours. Macbeth was 2 hours and 50 minutes in length. Plus, we were waiting outside for about an hour. All in all, it was about 4 hours of standing. It is definitely a lot more tiring, but if I had the chance to do it again, I would do it in a heartbeat. It’s a different feeling being so close to the stage and to the action. You can feel when the actors spit. If they pour water, droplets splash into the crowd. The ground ticket “seats” are much closer than the seated gallery tickets and you save a lot more money too. I definitely recommend it if you have the energy for it! Bring lots of water and snacks. 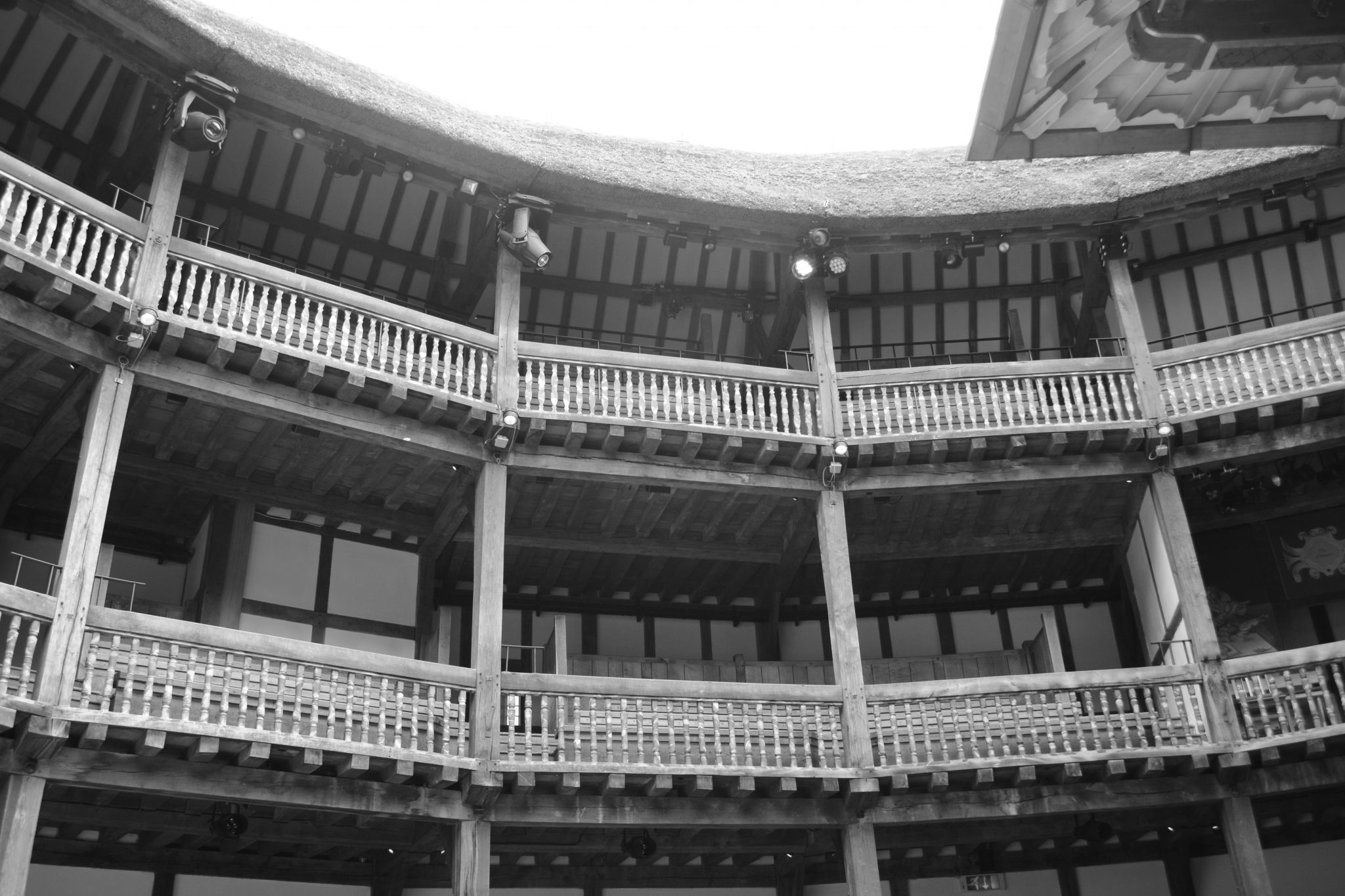 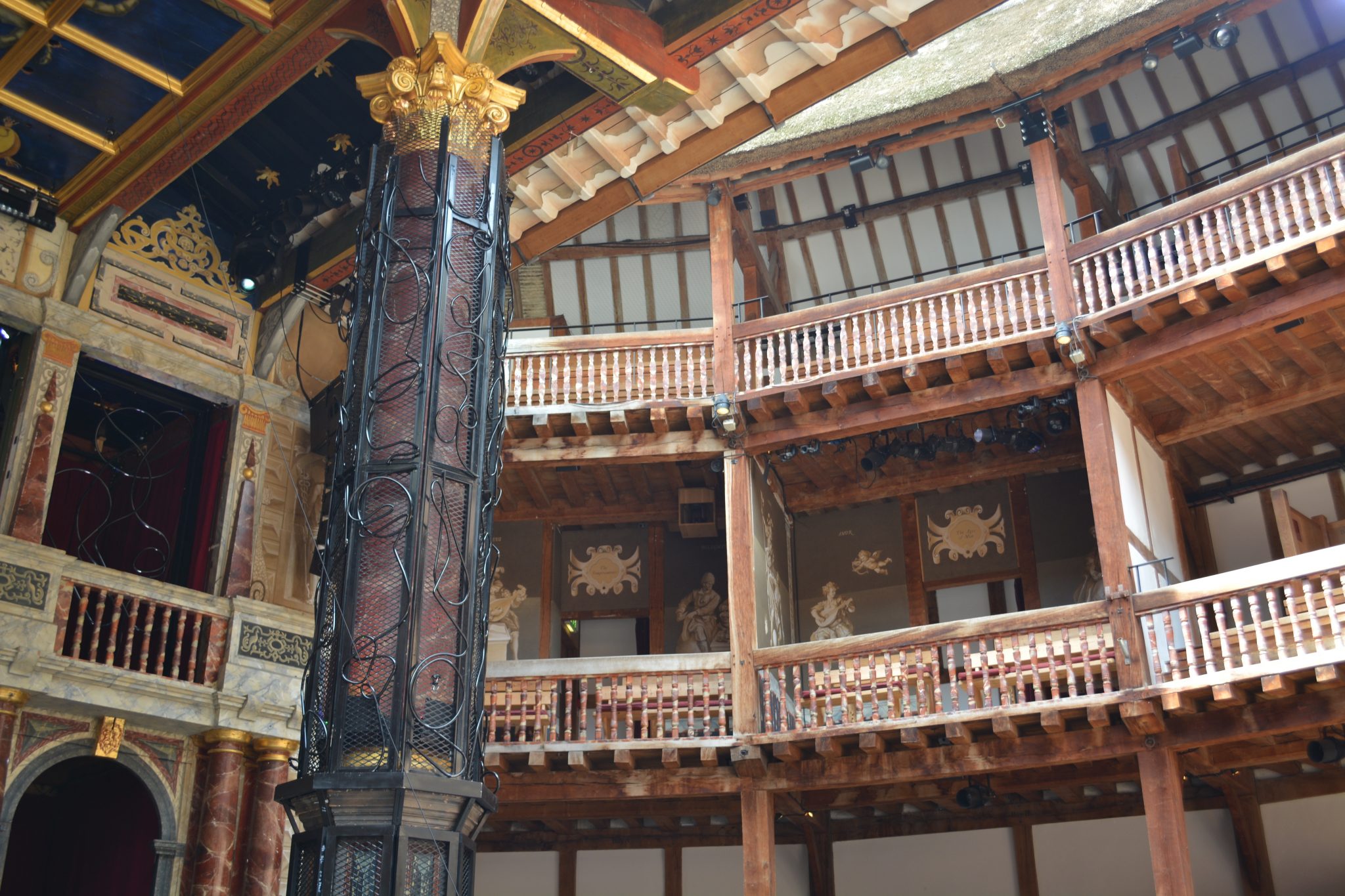 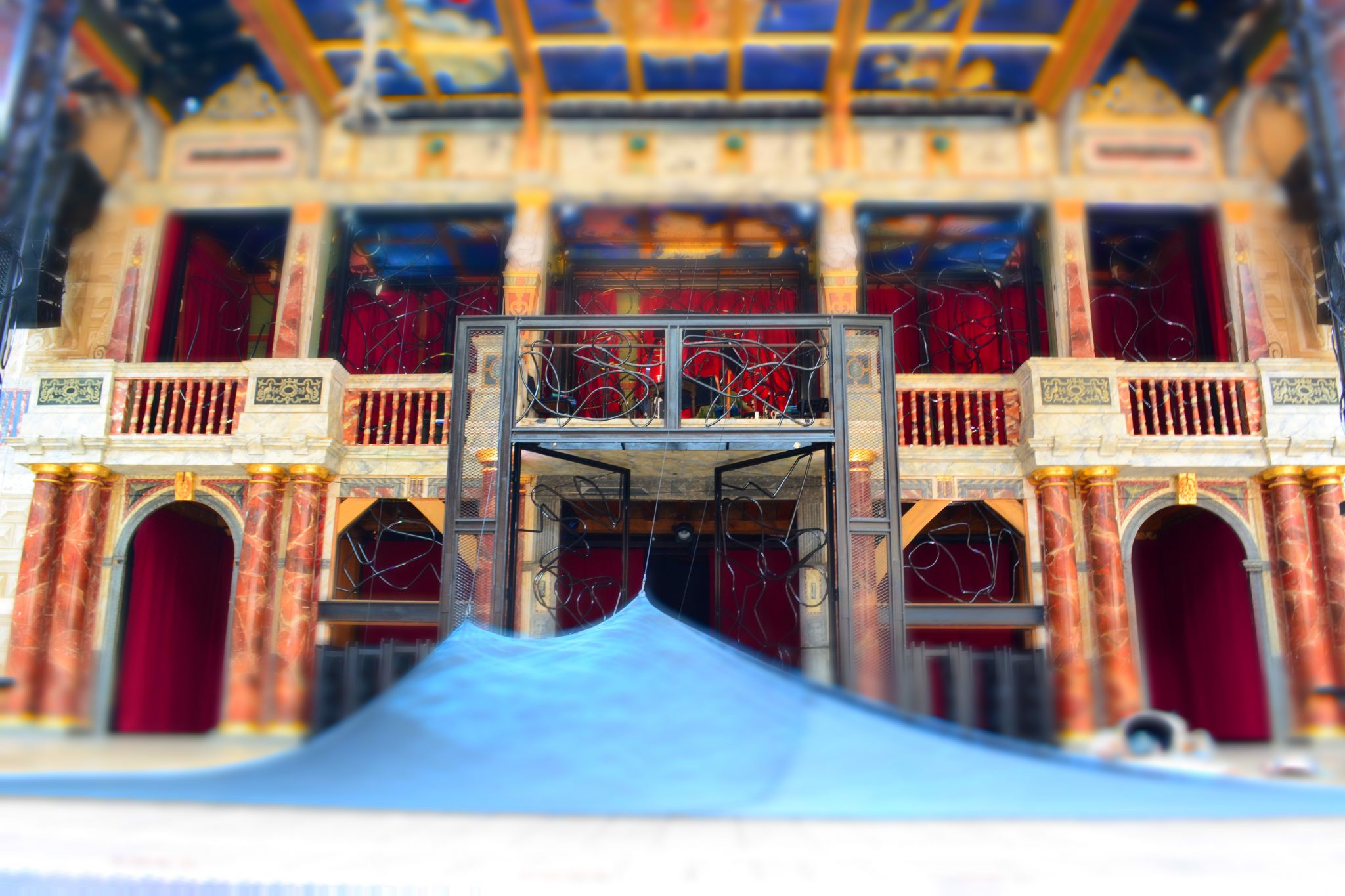 The Stage. Standing tickets at the front are truly this close! 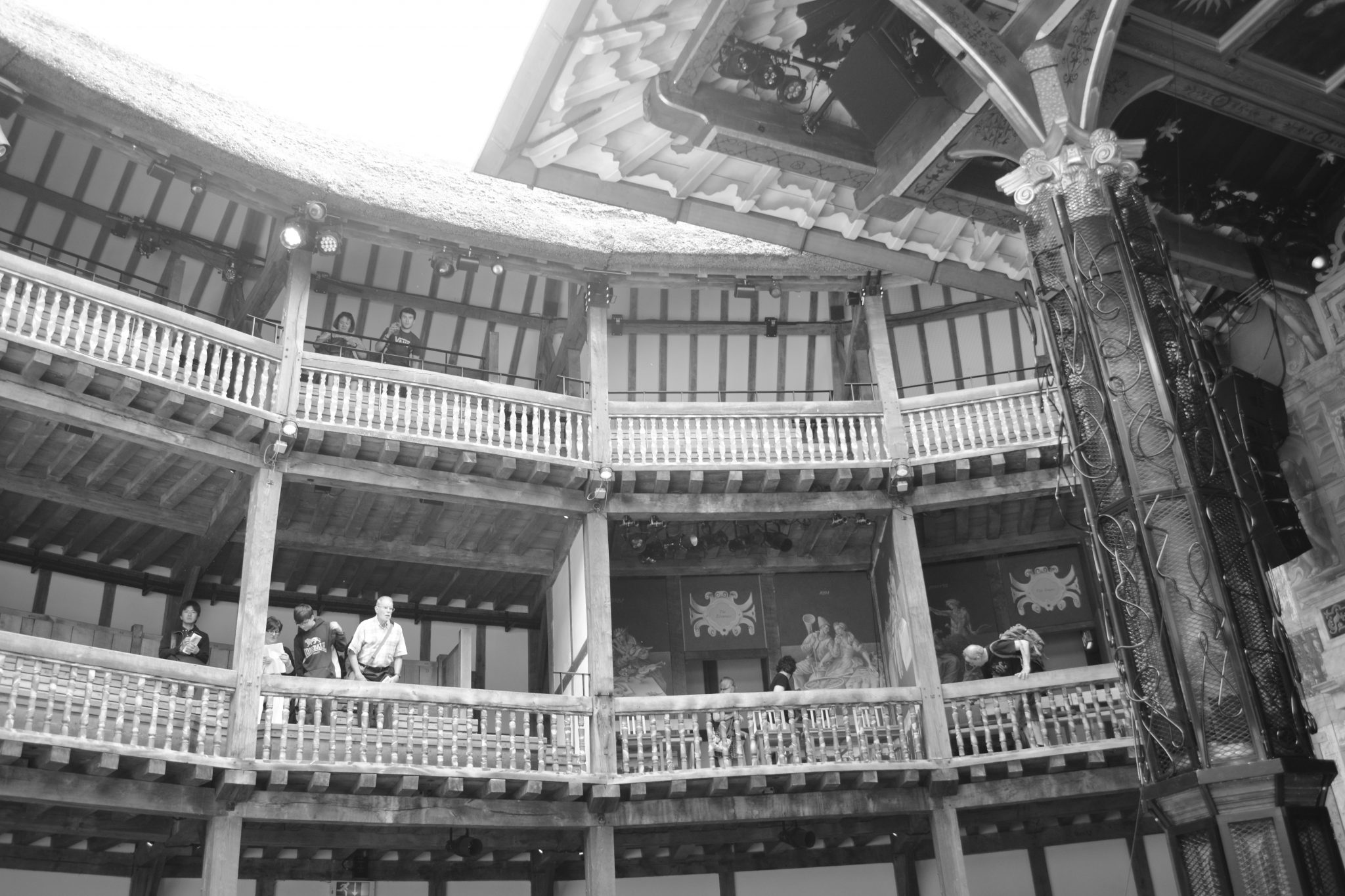 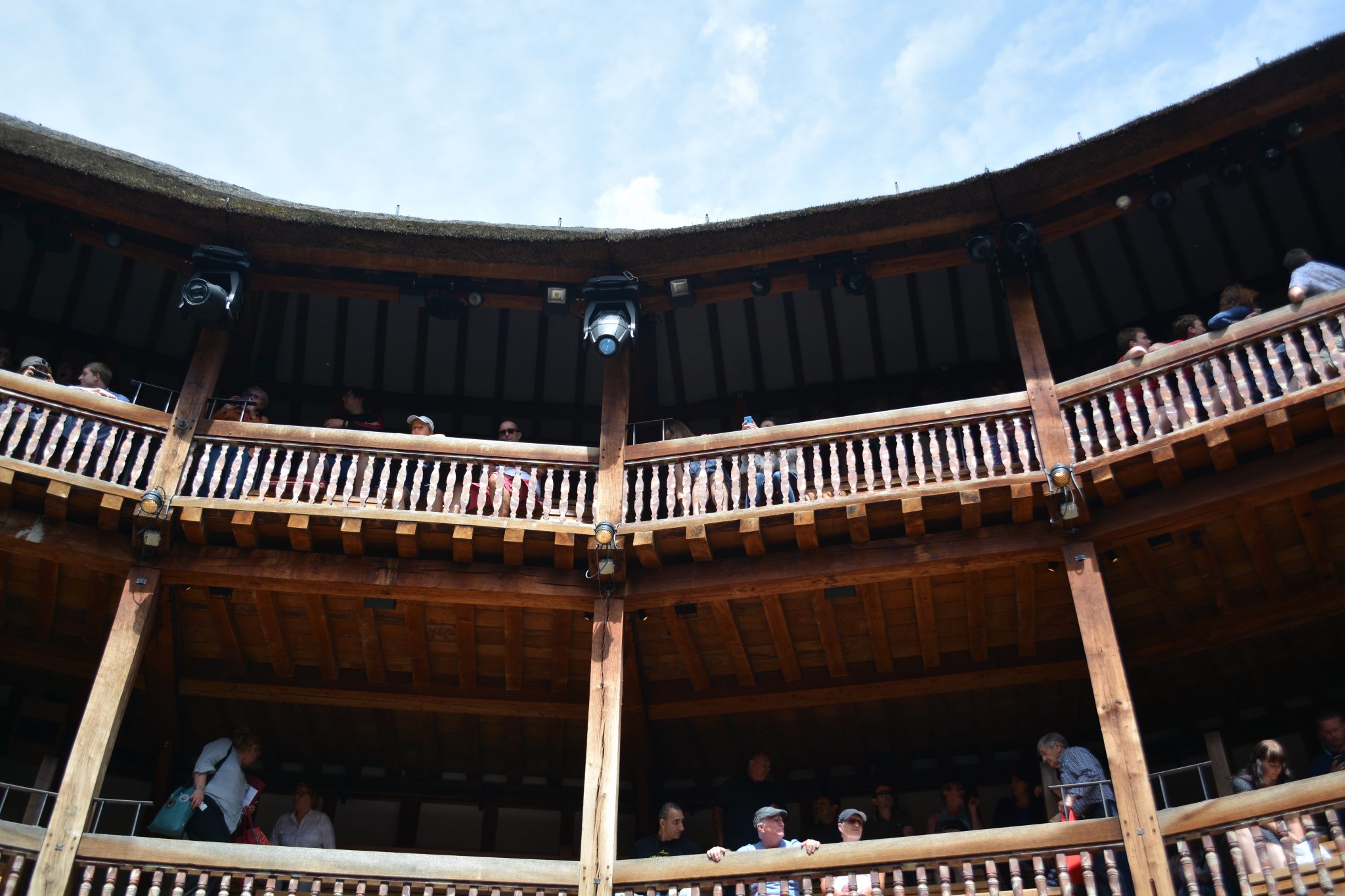 I found Macbeth, starring Ray Fearon and Tara Fitzgerald, to be absolutely amazing. I loved every second of it, and I found it to be very dramatic. I do feel like I wouldn’t have enjoyed it as much if I was sitting in the very back of one of the Upper Gallery Seat boxes. (I saw some people fast asleep in their seats after about an hour of the play) Being so up close was like being immersed into the history of Macbeth and all the drama and action Shakespeare intended to write about. It was truly amazing. Next, I hope to see either Hamlet or A Midsummer Night’s Dream!

After the play was over, we were much too tired to do any more sightseeing by foot. We took a cab back to our hotel and for dinner, we went out to the maze restaurant. It’s a very popular restaurant and what makes it even more popular is the fact that it’s a Gordon Ramsay restaurant. Essentially, it’s modern European cuisine with a bit of an Asian flourish. For more information, you can click here to go to their website. It is a little on the pricier side, but it is a high-end restaurant that serves dishes of very good quality, so the price is worth what you’re getting! After a long day, we rode back to the hotel, all tired out but incredibly happy. It was a great 3 days in London; 3 days that I will never forget.

The next few posts in this ‘Escape to Norway 2016’ vacation series will finally be on the Land of the Vikings- Norway. Make sure to keep an eye out for the first post of the Norway series! The views are so stunning; you really won’t want to miss any of the pictures!